In this week’s The Chi, we see Emmett do two things we’ve previously never witnessed him doing: parent all three of his children at once, and swear off all forms of sex. Is it terrible to say that we don’t have much faith in him on either front?

Elsewhere, Douda and Quentin have a plan to take back the city… and it involves Trig — er, Victor. Read on for the highlights of “Oh Girl.”

‘WHO’S YOUR DADDY NOW?’ | In a continuation of the conversation that started at the end of the season premiere, Q tells Tracy that he’s going to take back the city. He wholeheartedly disagrees with what Douda was trying to do as mayor — “You’re supposed to bribe the cops, not get rid of them” — and he wants the gangs back in charge of the streets. Tracy protests… and that’s when she learns that Quentin was the silent investor funding ROCK and Trinity House. “Who’s your daddy now?” Q asks her nastily.

The next day, Tracy excitedly shows Trig and Shaad a magazine story in which Trig’s name is bandied about as a potential city council member. But Trig immediately shoots down the idea, mainly because he’s a felon. Tracy, however, says that he could get his record wiped and run. Douda makes it happen, and procures a young woman who’s willing to pose as Trig’s girlfriend to make him a more pleasing candidate. Trig — who wants to go by his given name, Victor, now — balks. And in a move I truly don’t understand, Tracy says that ROCK and Trinity House will lose their funding if he doesn’t run. (I guess because Douda and Quentin are playing hardball?) The former mayor places a non-disclosure agreement in front of Victor and asks him to sign, saying, “The only way we can change Chicago is from the inside.” But Victor points out that Douda couldn’t do it, and walks away without signing. Though Tracy looks worried, Douda acts as though everything is unfolding according to plan. 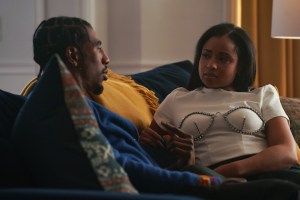 But when Emmett forgets to pick up EJ at school that afternoon, it’s Rob who steps up to make sure the kid is taken care of. And he lets Emmett know that he’s not the enemy, though it’s unclear how much of that message sinks in. By the end of the hour, Emmett seems to commit to the online guru’s 40-day celibacy challenge. Godspeed, my good man!

GUESS WHO’S BACK? | Kevin and Lynae get in trouble for bringing videogame equipment to school, but they wind up turning the incident into an opportunity to create an afterschool videogame club. Later, Kevin runs into a smart, pretty girl named Simone in one of his classes and seems gobsmacked by how much he likes her. Meanwhile, Jake gets called to the office and is surprised to see his long-absent mother there. When they meet up with Victor, their mom insists she’s clean. Victor warns her not to mess up what they’ve built. Then Jemma comes over for dinner, and everyone seems happy (at least for the moment). 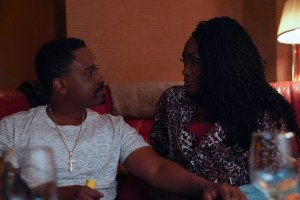 SHAAD’S GOT MOVES | Shaad meets a nice lady named Deja at a community clothing drive, and she agrees to come over for dinner. He makes her shrimp alfredo with fresh pasta (I’m impressed!), and he’s surprised that she doesn’t like the Moscato he pours. She offers to take him to a wine tasting in the future, and though he’s shocked to hear that people often spit the wine out at those events, he’s excited.