Candice Patton has shed light on the reason for her absence from four consecutive episodes of The Flash‘s recently wrapped Season 8 — all in the wake of showrunner Eric Wallace being asked by TVLine and other outlets about Iris’ untimely vanishing act.

On-screen, Season 8’s 14th episode (of 20) ended with Iris, who since Season 7 has suffered from “time sickness,” disappearing into the Still Force. Team Flash’s attempts to track down Iris came up empty, but she ultimately resurfaced in this season’s penultimate episode — though in the year 2049. By the end of the finale, Iris had returned to 2022… seemingly died (but didn’t)… and then “leveled up” to free herself from time stone limbo and reunite with Barry in time to convince her husband not to trigger Armageddon during his super-duper-charged clash with Negative Reverse-Flash. Whew!

Storyline-wise, Iris’ absence arguably made some sense, though the decision to write out the series’ leading lady for a four-episode stretch — and during what very nearly was the Arrowverse series’ final season — was curious. 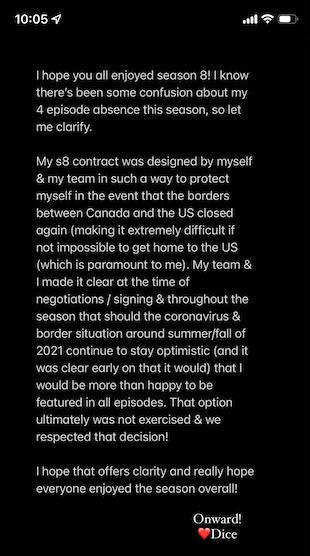 Patton on Thursday night explained that she had proactively requested the potential time off. And though she ultimately didn’t need it, the on-screen story that had been constructed to set up her absence stayed put.

Hoping to “clarify” any “confusion” about her four-episode absence, Patton in an Instagram story (right) explained that her contract for Season 8 “was designed by myself and my team in such a way to protect myself in the event that the borders between Canada and the US closed again” due to COVID travel restrictions, “making it extremely difficult if not impossible to get home to the US (which is paramount to me).”

Patton said that she and her team made it clear that should the pandemic travel situation “continue to stay optimistic (and it was clear early on that it would) that I would be happy to be featured in all episodes.”

That option to feature Patton in all 20 episodes, however, “ultimately was not exercised,” she said, “and we respected that decision.”

Showrunner Eric Wallace, when TVLine asked about Iris being isolated in recent storylines, said, that “without question,” the pandemic was in part to blame.

“COVID has been… creating havoc with how everybody makes their TV shows, not just ours,” he said. “And if you throw that in with just the stories themselves, it created a certain storytelling style.”

Wallace also said to ComicBook.com, “I recognized the frustration of the audience, especially when there were episodes where Candice was not in for four in a row. I totally get that. But the point is, we never lost sight of the goal” of the time sickness/Armageddon storyline.

Wallace assured TVLine readers that with that story now told — plus, Patton recently closed her deal for next season — Iris and Barry will have “much, more more” together time in Season 9.

“Now that she has completed her journey of leveling up, she and Barry can both face what is coming in Season 9 together, as a couple,” he said.