Can we please talk about those last few, very surprising minutes of The Chi‘s Season 5 premiere?

I was expecting Otis “Douda” Perry to saunter back into the action; despite his ignominious departure at the end of Season 4, there was a real sense of unfinished business about the man. But Quentin “Q” Dickinson? Whom we haven’t seen since the Season 1 finale? The guy many of us thought might be dead? Yeah, I definitely did not think he’d be the person knocking on Tracy’s door in the final moments of Sunday’s episode.

But then again, the premiere ripped open a big bag of upheaval and sprinkled it over pretty much everyone’s storylines. So let’s run through the highlights

of “Overnight Celebrity,” shall we? 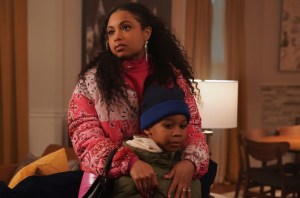 EMMETT AND TIFFANY | The episode opens with Kiesha having sex with a guy whose head is buried beneath the covers. And when he surfaces… it’s Emmett! But the interlude is just a dream Emmett’s having. And when he wakes up, Tiff informs him that she’s taking EJ and going to stay with her mother for a while because “I’ve just gotta figure some s–t out.” Emmett goes to Darnell for some advice; his dad gets him drunk, saying that alcohol will help him get in touch with his feelings. And it does. So Emmett goes to his mother-in-law’s place to talk with Tiff in person… and then he vomits in the front yard the moment he gets there. An irked Tiff has him come inside, and he asks her to come home. She counters with: “I don’t think I want to be your wife anymore.” Ouch. And by the end of the episode, she’s taken EJ and moved in with Rob, who swears the offer of a free room doesn’t come with any strings.

JADA | Jada seems to be doing well, post-cancer treatment (the short hair is cute!), and she loves having Suede around to fix things in the apartment and keep her bed warm. But when he raises the idea of moving in together, her tepid response makes him feel like he’s “a glorified TaskRabbit.” Complicating matters: When Darnell comes over to fix a showerhead that Suede didn’t get to, he and Jada kiss. She’s into it, but then she stops it, and he looks at her longingly while telling her that she was the one that got away.

TRIG AND IMANI | While Imani is in St. Louis, Trig buys an engagement ring and eagerly awaits her return so he can propose. Shaad is all for it; after the rough patch he and Imani had last season, he’s now her Number 1 fan, calling her a “good woman with a good heart.” In the days before her return, however, Trig and Shaad break up a fight between two teen boys at ROCK. Trig thinks the kids in question should volunteer to make things right, but Tracy doesn’t agree: She recognizes one of them as the kid who shot Ronnie at the end of Season 3, and she doesn’t want a murderer hanging around the community center.

The kid makes Trig even madder the next day, when he breaks a window in Trig’s car. Trig chases him and roughs him up, but the whole thing was a trick: The kid’s friend records it all, then posts it online, which reflects badly on Trig and his involvement in ROCK’s community outreach. Or, as Shaad puts it: “You can’t turn into the enemy, Trig!” Even worse, when an off-camera Imani sees the video, she decides that she’s not ready to return to Chicago and her relationship. So that big proposal that Trig planned at Emmett’s restaurant is a bust. 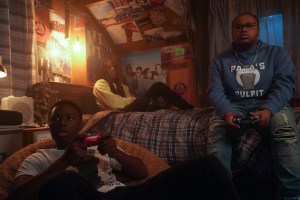 KEVIN, JAKE, PAPA & CO. | Lynae is still living with Kevin and his family, but — as Papa ascertains — her relationship with Kev is like that of a sister. One afternoon, she’s around to witness it when a new first-person shooter video game gives Kevin flashbacks to shooting Ronnie years ago… Jemma and Jake are still together, but after he’s kinda mean to her when he doesn’t make the basketball team, she questions whether they should even be together. (Props to her dad, though, who seems to be mostly recovered from his beat-down.) Papa is still very into his podcast, Papa’s Pulpit, which even has merch now! But when he makes a comment at a school pep rally about Black families needing stronger father figures, he gets booed off stage. 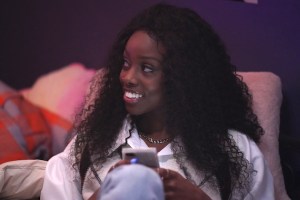 KIESHA | Despite Kiesha’s repeated gratitude for Christian being a nice boy who helped her greatly as she recovered from her attack, she breaks up with him — via voice text, which seemed so cold? — in order to start fresh as she begins college and takes little Ronnie with her. And because Christian is such a good egg, he texts her back that he is happy she’s doing what she needs to do and wishes her well.

TRACY, DOUDA AND QUENTIN | At the end of the episode, Tracy is watching Waiting to Exhale at home when there’s a knock on her door. “The f—k you doing here?” she asks when she opens it, and we see that Quentin is standing on her front stoop. “I came back to finish what I started,” he replies. Eh, I think she’s already had enough sexual abuse from you, Q, but thanks. And before we can even process Q’s return, Douda steps out of the shadows, saying, “I came back for you.”

Now it’s your turn. What did you think of the premiere? Grade it via the poll below, then hit the comments with your reactions to the big return!