THE PERFORMANCE | We all know now that Martha was right when it came to Nixon’s shady Watergate dealings, but it wasn’t until the penultimate episode that we saw just how much she suffered as a result of speaking the truth.

Roberts fired on all cylinders, radiating on screen during a flashback depicting Martha and John Mitchell’s meet-cute. Her ebullience and southern charm were dazzling enough to soften the brashness of the politician who would become her future beau.

But her display of self-confidence and poise was soon rattled when we jumped ahead 16 years. As Martha was about to testify on the Watergate shenanigans, her snark and wit melted away as the committee attacked her character, including her former hospitalization and the “acute mental illness” that ran in her family. The actress deflated on cue, and in turn, swiftly built herself back up despite the many daggers being flung her way. After the hearing, she unleashed, trashing the family’s apartment, defacing her husband’s portrait and screaming out in frustration. It was unjust treatment, and Roberts forced us to feel her character’s pain.

But when John came home, the sparks really started to fly. “You set me up!” she drunkenly seethed. “You gave them the knife and you told them exactly where to stick it!” Martha then broke out a brutal diatribe against John, taking shots at his crimes and pseudo relationship with Nixon. Punches were thrown and drinks were smashed as she continued spewing (and slurring) fiery insults at a man she had grown to hate. With tears in her eyes, a quivering lip and manic physicality, Roberts completely committed to the drama, and never once took her foot off the gas. Rather, she reveled in the emotional extremes. And when John admitted to being responsible for her traumatic Californian imprisonment, the actress didn’t need to speak another word. Her eyes spoke volumes. 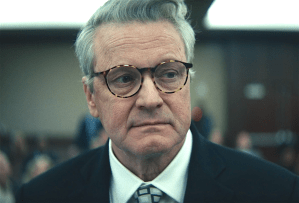 HONORABLE MENTION | We’re still not sure how we feel about The Staircase‘s accused killer Michael Peterson, but we are sure that Colin Firth absolutely wowed us with a masterfully layered and complex performance. In this week’s finale, Firth showed us all the many sides of Michael: He could be an intellectual charmer, as he wooed wife Kathleen at a fancy holiday party, but he could also be vicious, as he harshly tore into daughter Margie at a post-trial celebration dinner. Michael himself was a performer, tailoring his personality to fit his situation, and Firth deftly juggled his myriad of personas, with the finishing touch being that final enigmatic smile Michael gave to the camera. The Oscar winner did seem an unlikely choice for this role at first, but he won us over with a stunning transformation that inhabited the dramatically fertile ground between hero and villain. 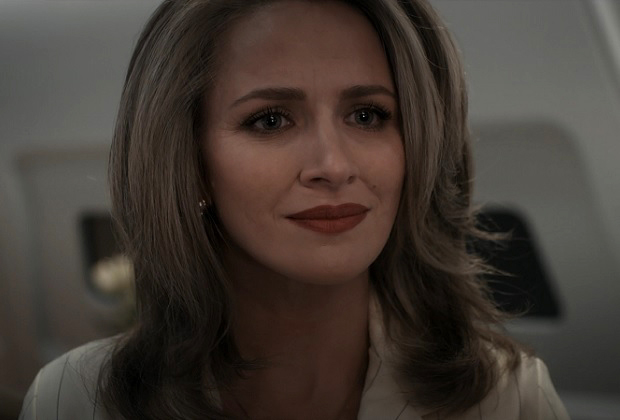 HONORABLE MENTION | It only took a few seconds for Shantel VanSanten to impress us during For All Mankind‘s Season 3 premiere. As her character Karen silently watched Danny and his bride share their first wedding dance, VanSanten layered in a multitude of emotions into Karen’s reaction to Danny’s choice of song. The “Don’t Be Cruel” cover played a pivotal role in Karen and Danny’s own story last season, so upon hearing the tune again, Karen’s face flickered with everything from shock to confusion to possibly even hurt. VanSanten deftly navigated Karen’s complex feelings, while also trying to put on a nonchalant façade in front of the wedding guests. No one else may have caught Karen’s emotional response, but we definitely took notice of VanSanten’s stellar performance. 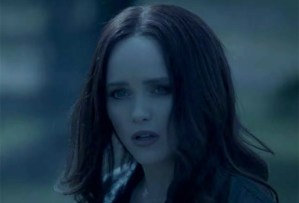 HONORABLE MENTION | Equal parts refreshing and unexpected, one of the highlights of Legacies‘ final season has been the gradual redemption of Rebecca Breeds‘ Aurora, a character first introduced on its parent series back in 2015. Previously written off as a “crazy” woman scorned, Aurora became far more complex when examined under proper lighting, and Breeds’ consistently nuanced performance played a large role in fans falling in love with someone they once reviled. Breeds’ work in Thursday’s penultimate episode was a culmination of all the work she’s put in thus far, making saying goodbye to her far more difficult the second time around.