CBS is welcoming a pair of seasoned sitcom scribes to The Neighborhood.

Bill Martin and Mike Schiff, who previously created the CBS comedy The Unicorn, will take over as co-showrunners for Season 5, replacing Season 4 showrunner Meg DeLoatch, TVLine has confirmed. The gig reunites them with series star Cedric the Entertainer following a two-season stint on his previous series, TV Land’s The Soul Man. 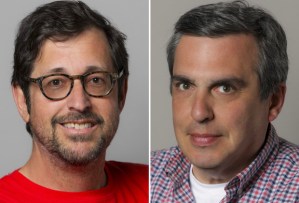 “I’m excited to have Martin and Schiff rocking with me on the fifth season of The Neighborhood,” Cedric the Entertainer said in a statement. “We worked together on my show The Soul Man, and let’s just say we are a formidable three-man pick-up squad in the world of sitcoms. I look forward to a fun, funny season.”

Outgoing showrunner DeLoatch took over for Neighborhood creator Jim Reynolds, whose departure was announced in April 2021. Upon his dismissal, it was reported that the EP faced complaints “regarding comments and other race-related issues over a period of time.” DeLoatch was appointed that June, and her exit was confirmed in March, nearly two months ahead of the sitcom’s Season 4 finale.

In addition to The Unicorn, Martin and Schiff’s joint credits include stints on 3rd Rock From the Sun, Fam, Grounded for Life, Ground Floor and Trial & Error.

The Neighborhood Season 5 will air Mondays at 8/7c this fall; a premiere date has not yet been announced.

Our sister site Deadline was the first to report the news.