Law & Order: SVU‘s Season 23 finale spent a lot of time hinting that Olivia Benson’s love life might be a more fecund field in the future, and it sowed two major seeds in the form of returned former assistant district attorney Rafael Barba and the absent — though no less a presence — Det. Elliot Stabler.

At the top of the hour, Olivia’s therapy session with Dr. Lindstrom revealed that she was feeling unhappy, and he theorized that it might stem from having no closure regarding her anger with Barba over his role in the Wheatley case. Or maybe her feelings have something to do with her old partner?

“I think that you and Elliot either need to see if there’s more there or move on,” Lindstrom told her. “This idealized relationship that’s hanging over you prevents you from true intimacy, Olivia, either with him or with anyone else.” 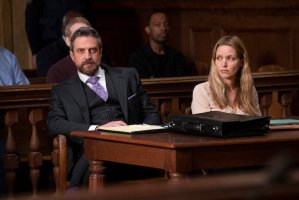 How convenient, then, when a victim of domestic abuse needed a top-notch attorney, and Rollins was able to get Barba to take the case. (That really irked Carisi when he found out, but don’t worry: “Rollisi” recovered and even exchanged “I love you”s by the end of the hour.) Of course, Barba triumphed in the courtroom. But it was the scene between him and Olivia at Forlini’s at the end of the episode that really grabbed us. When she reiterates her disappointment about how Wheatley’s trial went down, Barba countered with: “What I don’t get: Why you feel more anger at me than you ever let yourself feel toward Stabler.” Shots fired!

The pair said a lot of things to each other, but eventually Rafael told her that he understood why she defended Stabler, because “That’s what you do when you love somebody unconditionally.” And then the charged conversation ended like this:

BENSON
Please don’t tell me how I feel.

BARBA
In this case, I can, because I do know what it means
to love someone unconditionally. When you’re ready to
stop feeling betrayed by me, I’ll be here.

BENSON
I miss you, too.

So yeah, we jumped at the chance to discuss it all with Raúl Esparza, who brought Barba back to the procedural for the second time this season. Read on for his thoughts on the finale.

TVLINE | I’m never happier than when SVU goes full “Let’s talk about our feelings.” So, as you can imagine, the finale made me very excited.
Yeah, it doesn’t always work. [Laughs] But I will tell you when Warren [Leight, showrunner] sent me this particular script, I thought it was just beautiful. 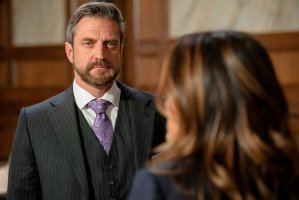 TVLINE | Barba comes back into Benson’s orbit. Do you think he takes this case specifically for that purpose?
In this case, personally, I think he takes it for her. Usually, Barba’s the kind of guy who will take a case, specifically, just to prove that he can, and to do something that no one else can do. Of course, he’s drawn to that, but there is subtext throughout the script [that] it’s really about Benson.

Also, it follows on so completely with the episode that we did… the one where he was defending Wheatley, obviously, that whole story.

TVLINE | Right.
And I think the fans were just up in arms. [Laughs]

TVLINE | Do you think he regrets taking the Wheatley case, based on how it affected his friendship with Olivia? Or would he do it again if he had to?
I think he’d actually do it again if he had to. What’s been most interesting about Barba as a character, and it was definitely what Warren created when he first wrote it, is that he’s a bit of an antagonist. He was always written as someone who would go head-to-head with Benson’s perspective, which was necessary. After Stabler left, there was no real balance in the points of view that the show had to maintain. I think the great, great secret to SVU’s success is that it never really lets you off the hook.

Benson is a character that forces you to empathize and care, as opposed to other iterations of Law & Order, where it’s really just about the intellectual interest in the case and what happens. Here, it’s like there are no easy answers, they’re always living in a gray area, and she’s the hook. But Stabler was the fury and the opposite position. And without him there, I think the show obviously needed some sort of grounding in the ensemble that was created. And I feel like Barba — not trying to replace Stabler in any way because it’s not the same point of view — but Barba worked really well, and he was in opposition to her. And so, sometimes I think it’s not so interesting when they’re the best of friends, because that’s not great television. [Laughs]

TVLINE | It was interesting to me to hear Barba talk about Stabler from the perspective of someone who grew up around bullies, because that is not a perspective we get a lot in the SVUverse.
No, never. And I think it is what’s exciting and intimidating about [Benson and Barba’s] relationship, and part of the reason why they became a really good team together over the years. Though, I could not have articulated that while I was [a series regular], you know, because you’re doing so many episodes. And it’s just I wouldn’t have thought there was a game plan, and I think there was. [Laughs] I think maybe these showrunners know what they’re doing. 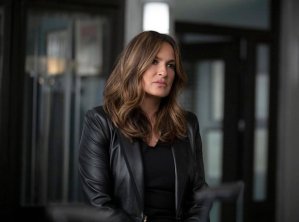 TVLINE | This episode puts a more definitive more-than-friends framing on Benson and Barba’s relationship than we’ve seen before. When you got the script, did it surprise you to see the things that they’re saying to each other here?
I think that it can be taken in a number of ways. So, it surprised me to have it brought out so explicitly, however, but not too much. There are fans that have always wanted to kind of spin off that story. And Mariska [Hargitay] and I kind of laughed about it, too. Like, “Well, are we suddenly in a triangle here? What’s going on?” [Laughs] Which is hysterical, because it really isn’t how we play it. I think she and I always play it as best friends and almost brother and sister sometimes. However… I don’t know, I know what I was thinking when I said the words that I said onscreen… I like that it can be read in number of ways.

TVLINE | I was thinking about the circumstances under which Barba originally left, and whether they were the kind of thing that changed him fundamentally. Do you think that he would feel this way about her, or be in this situation with her, had he not had that experience?
I think that’s a good question, and I think that you’re right. He would not have felt this way, or been as emotionally available, had those experiences not happened. She definitely changed him over the years. The guy who came in was ballsy and quite arrogant, which he still is; that’s one of the best things about him, that chip on his shoulder. He’s got a lot of stuff to prove, he dresses to intimidate, he can be a d–k — like, that’s all great, you know? And I was sarcastic, and that constant sort of pseudo-battle with Carisi, which is just fun, you know.

[Barba is] just one of those people who’s got no social graces. But over time, he became much more empathetic and much more attuned to things that I don’t think he was comfortable with originally in his life, and that’s because of the relationship with her. And so, yeah, as things evolved toward the end of the last season that he was there like, I absolutely believe that it changed him.

TVLINE | The episode, and Olivia’s conversations with her therapist especially, very much sets up the possibility of something between Barba and Benson. Have you had any conversations about coming back in Season 24?
No, we haven’t. We haven’t discussed it, actually. You know a lot of times I feel like Barba is very much a figment of Warren Leight’s imagination. [Editor’s note: Leight announced in May that he would step down as SVU showrunner at the end of Season 23.] I know that Warren has thought this through, so who knows? But he’s also part of the universe of Law & Order in both worlds and a very much-loved character… so we’ll see.

Now it’s your turn. What did you think of the finale? Grade it, and the season on the whole, via the polls below. Then hit the comments with your thoughts!