The more the merrier…? 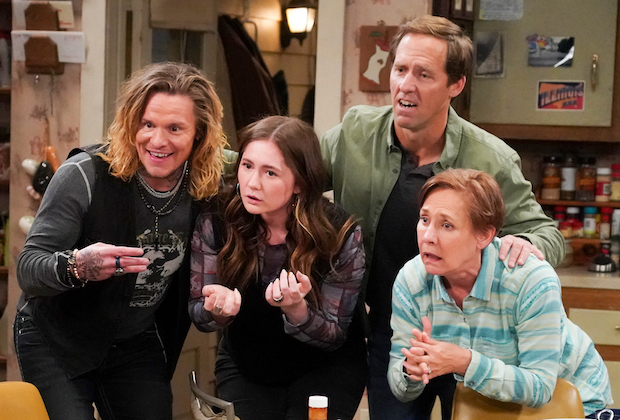 At the start of Wednesday’s Conners, Darlene and Ben were ready to tell the family that they’re newly engaged. But as soon as they entered the kitchen, Neville got up from his seat and asked Jackie to marry him. Then, in a second twist, Aldo stood up and proposed to Harris! At that point, Becky suggested that Darlene and Ben get hitched as well — three rings make a circus, after all! — but Darlene, uninterested in a triple wedding, suggested that she and Ben were still broken up, and Ben played along.

Later that night, the recently reunited lovebirds made a plan to elope — a plan that Dan ultimately caught on to after Darlene not-so-wisely purchased wedding bands at the same store he bought Louise’s engagement ring, which resulted in a $25 gift certificate for his referral. And after some heavy guilt tripping, Darlene and Ben agreed to partake in a joint ceremony.

Darlene, of course, was not happy about Harris’ engagement to Aldo. But as she explained to the rest of the family, she was more concerned about her 20-year-old daughter cutting ties than she was of her entering a doomed marriage. Becky, with an assist from Louise and Aldo’s father Jesse, stepped in to try and convince her niece that she was making a mistake, but her mind was made up. It wasn’t until Aldo declared that he wanted to have a baby as soon as they tie the knot that Harris appeared to doubt her future with the ne’er-do-well.

What did you think of The Conners Season 4, Episode 19: “Three Ring Circus”? And how many couples do you expect to actually tie the knot in the May 18 finale?