In what amounts to something of a sweet Candy casting surprise, Justin Timberlake turned up in the penultimate episode of real-life wife Jessica Biel‘s Hulu limited series. 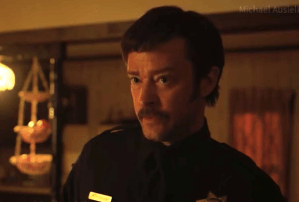 Timberlake — who appears throughout Episode 4 and is set to return for Episode 5 — plays Steve “Diffy” Deffibaugh, one of the sheriff’s deputies investigating the crime at the center of the five-part drama. As such, he shares several scenes with Biel’s titular suspect, whose story he doesn’t buy for one second.

This marks the first time Biel and Timberlake have acted opposite each other. In a recent appearance on Jimmy Kimmel Live, Biel — in an effort not to spoil the Candy surprise — danced around a question about possibly working with Timberlake at some point. “We want to play adversaries,” she shared.

Based on a true story, Biel stars as the 1980 housewife and mom who did everything right — good husband, two kids, nice house, even the careful planning and execution of transgressions. “But when the pressure of conformity builds within her, her actions scream for just a bit of freedom. With deadly results.”

Melanie Lynskey (Yellowjackets) costars as Betty Gore, who becomes a target for Candy’s aforementioned “scream for freedom,” while Timothy Simons (Veep), Pablo Schreiber (Orange Is the New Black) and Raul Esparza (Law & Order: SVU) round out the supporting cast.

As we previously reported, a bit of calendar synchrony played into Candy‘s unorthodox, daily release plan: Friday the 13th, which is when the finale drops, is the day in June 1980 that Candy  Montgomery killed neighbor Betty Gore.

“We all circled Friday the 13th in May because the opening episode takes place, and [Gore’s death] took place, on a Friday the 13th, of June,” executive producer Michael Uppendahl told Showbiz Cheat Sheet. “And we all thought, ‘Well, let’s work that in.’”