Production on Season 2 of NBC’s La Brea is underway in Australia, and to mark the occasion, TVLine has an exclusive peek at the premiere.

Like, literally a peek at the premiere — meaning, the front page of the script, which reveals the title for the hit sci-fi drama’s Season 2 opener.

Check it out below, then read on for more: 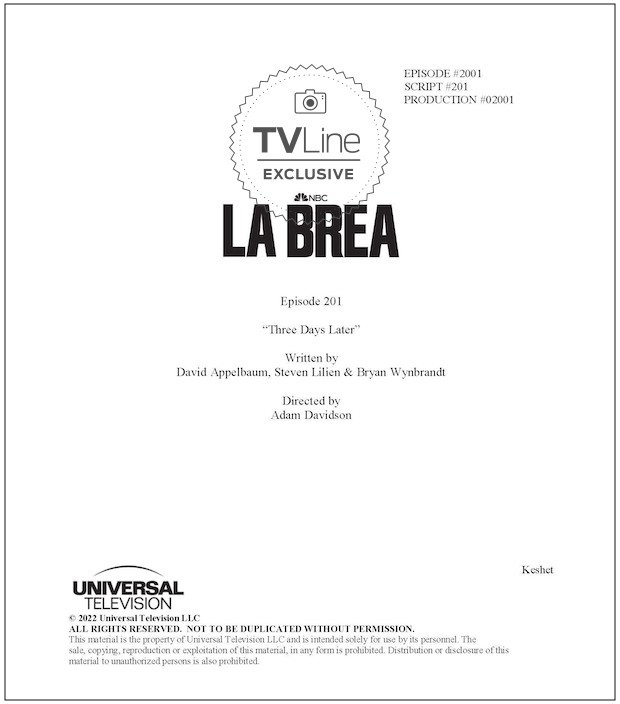 “We’re so thrilled to be back in production for Season 2,” La Brea creator and showrunner David Appelbaum tells TVLine. “Can’t wait for our fans to see all of the mysteries and surprises we have in store. It’s going to be an exciting season.”

Produced by Universal Television and Australia’s Matchbox Pictures (which are both divisions of Universal Studio Group in association with Keshet Studios), La Brea’s freshman run averaged a 0.9 demo rating and 7.4 million total viewers (with Live+7 playback), making it the 2021-22 TV season’s top-rated freshman drama and the third-most watched.

La Brea Season 1 spanned 10 episodes; Season 2, it was recently announced, will total 14 episodes (40 percent more!), though they will likely be split into two batches so that the visual effects-heavy series can still premiere this fall.

La Brea began with a massive sinkhole opening in the middle of Los Angeles, pulling hundreds of people and buildings into a mysterious and dangerous 10,000 B.C. Meanwhile, the rest of the world desperately sought to understand what happened, with Gavin Harris (played by Eoin Macken) and his daughter Izzy (Zyra Gorecki) laboring to reunite with wife/mom Eve (Natalie Zea) and son/brother Josh (Jack Martin), who’d fallen into the sinkhole.

La Brea Season 2: What We Know So Far

In its Nov. 30 season finale, Isaiah (aka a very young Gavin) make it to a special mountain top in the primeval world and stepped into a light portal, thus ensuring the future existence of kids Josh and Izzy. Josh, though, barely had a moment to celebrate his restored future when the light crack that Isaiah entered abruptly pulsated, disappearing Josh, sorta-girlfriend Riley (Veronica St. Clair) and a tween named Lily (Chloe de los Santos), who were standing nearby. Elsewhere in that “land down under,” stoner Scott (Rohan Mirchandaney) leaned on scientist Rebecca Aldridge (Ming-Zhu Hii) to share more of what she knows, and she led him to a gleaming, futuristic tower.

Topside, Ella aka grown-up Lily (Michelle Vergara Moore), using a map given to her in the past by Aldridge, led Gavin, Izzy, scientist Dr. Sophia Nathan (Virginie Laverdure) and DoD Agent Markman (Toby Truslove) to a small campsite sinkhole. Taking a literal leap of faith, Gavin, Izzy and Ella hopped into the void, winding up on a beach circa 10,000 B.C.

Teasing some of Season 2, Appelbaum told TVLine that Josh, Riley and Lily will find themselves far from 10,000 B .C., in a world completely different from anything we’ve seen on the show so far.”

Want scoop on La Brea Season 2, or for any other show? Email InsideLine@tvline.com and your question may be answered via Matt’s Inside Line.