Paramount+’s new limited series The Offer tells the behind-the-scenes tale of how the classic film The Godfather made it to the big screen — but not everyone was happy to see it get there.

Thursday’s premiere begins years earlier: As New York gangster Joe Colombo (Giovanni Ribisi) looks to move up in the Mafia hierarchy, Hollywood studio executive Robert Evans (Matthew Goode) faces a financial crisis at Paramount Pictures and Albert S. Ruddy (Miles Teller) is a bored computer programmer at the Rand Corporation. Al meets a TV writer friend for a drink at L.A.’s Chateau Marmont, and when he sees Evans holding court (and a girl eagerly sits in his own lap), he decides: “I’m in the wrong f–king business.” 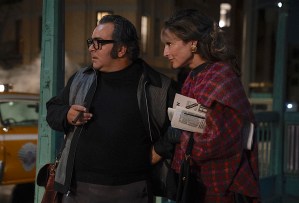 Book author Mario Puzo (Patrick Gallo) is thinking the same thing after his latest novel flops. When his agent suggests he write a book about the Mafia, he scoffs: “So they can put a bullet in my head?” But he’s racked up serious debts all over town, and his wife encourages him: “F–k art, Mario. Start typing.” He comes up with an idea about a powerful mob family where the youngest son wants nothing to do with the family business but gets pulled in anyway. (Sounds promising!) Meanwhile, as Al catches the eye of the Chateau Marmont’s sultry owner Francoise (Nora Arnezeder), he reveals he’s a TV fan well-versed in sitcom formulas, and he and a TV actor land a pitch meeting at CBS. Their first idea is met with silence, but their second one — a comedy about World War II POWs that would become Hogan’s Heroes — gets bought on the spot.

Al isn’t satisfied with the small screen, though. After seeing Planet of the Apes with Francoise, he decides he wants to produce movies, and he ambushes Evans on the Paramount lot, quickly earning himself a gig as a producer. (Ted Lasso‘s Juno Temple plays his smart-cookie assistant Bettye.) Al even talks Robert Redford into starring in a motorcycle racing movie, flying down to the Butch Cassidy set to woo him. Mario’s book The Godfather becomes a smash hit, with fans lining up down the block to buy it and an option to make a movie. But Colombo, who just earned a seat in the New York mob’s inner circle, doesn’t like the sound of it. 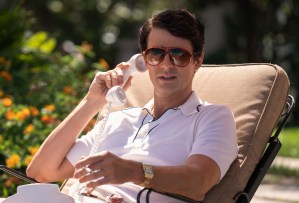 Evans entertains a pair of executives from Paramount’s parent company Gulf + Western, and though Warner Bros. is offering them a million dollars for the rights to The Godfather, he convinces them to say no, pitching the movie as a potential gold mine. Al’s movie with Robert Redford flops hard, but Evans puts him on a plane to New York to sell his vision of The Godfather to the Gulf + Western brass. Al speed-reads the book on the plane and tells the execs: “I’m going to make an ice-blue, terrifying film about people you love.” Somehow, that works! He gets the green light, and he wants Mario to write the screenplay, over Evans’ objections.

Mario says he’s the only one who can write this movie — and even promises to finish the script in three days. He gets into a scuffle with Frank Sinatra, though (Ol’ Blue Eyes was not a fan of the book’s Sinatra-like character Johnny Fontaine), and weeks go by without him writing a single page. Someone suggests Francis Ford Coppola, who’s hot after writing Patton, and Al meets with him, but Coppola hesitates: “I don’t want to glorify Mafia violence.” He’ll only do it if he can direct, and he and Al surprise Evans at a restaurant, with Coppola pitching his grand vision for The Godfather as a retelling of the American Dream and a story about family. “You need an Italian to tell this tale,” he declares — and Evans agrees, giving him the gig.

But Joe Colombo and his fellow mobsters are still fuming about the book, and when news of the movie comes out, Sinatra sends them a funeral wreath of flowers with a message: “Hopefully, we can make this thing go away.” Sure enough, after a dinner with Mario and Coppola, Al and Bettye get into their car to drive home… and a man walks up with a shotgun and blasts out their rear windshield.

Is The Offer a TV show you can’t refuse? Give the premiere a grade in our poll, and hit the comments with your thoughts on it so far.