Despite Sgt. Ayanna Bell’s best efforts, the woman she loves is now firmly in the clutches of a very sketchy player.

This week’s Law & Order: Organized Crime found Denise, lawyer extraordinaire and wife of Danielle Moné Truitt‘s Bell, accepting a job at Congressman Kilbride’s firm — even after Bell admitted that her office was looking into the politician. The career move left Bell feeling both guilty (Denise accepted without consulting her, after a work obligation made Bell unable to be home when she’d promised) and worried (because Kilbride is seriously corrupt!).

TVLine chatted with Bell about what Denise’s decision means for their family moving forward, what wisdom/cautionary tales Stabler might have to share on the matter and, speaking of Elliot, which Season 1 scene had the ‘EO’ ‘shippers coming for her.

TVLINE | In this episode, Bell makes a promise she doesn’t end up keeping, and there are some tough conversations between her and Denise. How worried should we be for them, coming out of the hour?
Bell and Denise, they’re not newlyweds, but they’ve been married, like, under five years. And they’re moms. If you’re married and you have kids, the dynamic changes between you and your partner when a child enters the equation. And in Bell and Denise’s situation, Denise is the one that carried the baby. She’s the one that stopped working and put her life on hold, so that they could welcome this child into the world. And Bell supported what Denise wanted, which was to have a baby.

Of course, she is thrilled to have a baby, but her career is nonstop. It’s completely out of her control, a lot of the things that happen, and I think that Denise and Bell have a hard time seeing eye-to-eye and understanding where each other is coming from.

[Regarding Denise’s job offer from Congressman Kilbride],she’s trying to protect Denise. Not only is she trying to protect her physically, but she’s trying to protect her emotionally, because nobody wants to hear that they’re being used as a pawn for something bigger. Like I said, she’s been off of work. She’s given birth. She has to deal with postpartum. There’s a lot of things you have to deal with after you have children, and the last thing you need to hear is that you’re not being sought after for your actual talent and who you actually are. 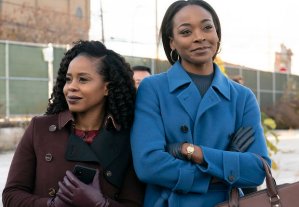 TVLINE | That’s the thing — she actually is good at what she does.
Yeah, she’s fantastic at what she does. So it puts Bell in a pickle, because she can’t share certain details about the case. She can’t tell certain things. She also doesn’t want her to think that she doesn’t believe in her because she definitely believes in her. I mean, the reason they live as well as they do is because of Denise. [Laughs] Sergeants don’t make a lot of money at all. Everybody asks, “How is Bell wearing this Burberry?” I’m like, “Because her wife is a lawyer!”

So, yes, in the first scene, Bell does want to keep her promise. She does want to help out with Jack more. And it’s funny, because I relate to both of these characters. I was a stay-at-home mom for a while, while I was auditioning and trying to get my career going and raising two sons and feeling frustrated because I wanted to do more than just be somebody’s mom and wife.

I wanted an identity outside of that. And so, I understand Denise. And then I understand Bell now, because I’m away from my sons. I’m working. I don’t have control over my schedule most of the time, and I feel a lot of mom guilt. I’m traveling back and forth from New York to L.A to be with my boys, and I struggle with a lot of mom guilt, and I try not to make promises that I can’t keep. You know, by the grace of God, I’ve been able to keep my promises to my son.

But I think Bell, she’s in a hard place because she really does want to help. She’s not trying to skirt out on her responsibility. It’s just that the responsibility of her job is overwhelming and unpredictable… I think where Bell failed was, she didn’t answer the phone when she should have. When Denise called, she should have answered the phone and been like, “Hey babe, I’m so sorry. I’m here at work. This came up. I’ll try to get there as soon as possible.” She didn’t. She sent her to voicemail. So, there’s a lack of communication there. And then, by the time you see Bell and Denise again, Bell is finally getting home and thinking everything is going to be grand between them, and Denise is like, “Oh, no, I’m fed up.”

… In that moment when Bell realizes [Denise] did take the job, she’s feeling frustrated. She’s feeling scared for her family, scared for Denise, and just doesn’t know what to do. So, we’ll see what this means for their relationship and how they bounce back from it. I feel like they can. I just think when one person cannot be completely open and honest with the other person, it makes it harder. It makes it harder for those two people to connect, Number 1, and then for them to get through issues and problems. 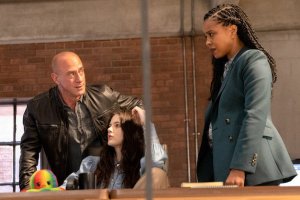 TVLINE | Stabler knows firsthand how much the job can affect a marriage. Is that something you think he and Bell might ever discuss?
I hope so. I mean, that’s one of the things I desire as we move into Season 3, hopefully. Bell and Stabler, they have a great rapport. You can tell they care about each other. Their bond is growing, but I would love some scenes between them where they’re talking about their lives, their experiences.

She’s a new mom. He has five kids. His kids have grown pretty much now. There is insight he could give her about how to navigate having a wife and a family and navigating the job because he’s been through it. And, like you said, because he has taken so many hits, he could probably give her a little insight about, “OK, this is how you do that.”

I would love if Stabler checked in with Bell a little more about how she’s doing. She does check in with him a lot. She’s always asking, “How are you? How are things going?” I think Bell does need someone to check in on her from time to time. 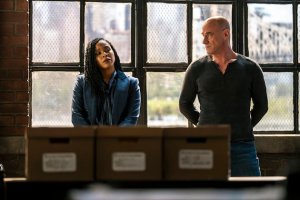 TVLINE | I’m a loud and proud EO ‘shipper, but I do love how Bell is one of the only people saying, “Eh, maybe you and Olivia need a little time away from each other.” I imagine you got pushback on social media for that.
Oh my God. Yes.[Laughs]  The scene where Bell is telling Stabler “You need to move on.” They’re like, “Wait, what does that mean? I love you, but I can’t get on board with this. Move on to what?” It is so funny. They are so connected to this relationship that hasn’t really happened in that way.

Bell, she’s a realist. She’s very logical in her approach to things, and even though she is caring and can be emotional, of course, but very logical of those things. She’s like hey, we have a job to do. There’s people’s lives at stake. I can’t get caught up in whether you all should be kissing, right? [Laughs] Go on a date. Like, that’s you all’s business. If it works out, awesome, but right now, somebody might die.