It’s always the quiet ones!

Collective church mice Lizzie Wemyss and Jo and Kezzie Beardsley let their freak flags fly in a big way in Sunday’s Outlander, admitting to Jamie and Claire that a) they’re a thruple, and b) Lizzie is pregnant with one of the Beardsley twins’ baby, but that neither she nor the brothers are sure whose the child is.

And honestly, thank GOODNESS. The lightly comic subplot is very welcome, given that Claire is dogged by a vision one of the men who raped her, then ends the hour having that man’s brother arrest her for murder. At least she admits to Jamie that she’s been huffing ether to escape, so that’s something, right?

Read on for the highlights of “Sticks and Stones.”

NO TIME TO PRAY | In the aftermath of Malva’s death, a stonefaced Tom merely wants to know how quickly his daughter lingered before she passed. Claire, still in shock, says it likely would have been quick. “No time to pray for forgiveness then,” he grunts, then decides that Malva and her infant son will be buried in the woods rather than sully the consecrated grounds of the graveyard with their sinful corpses. But Claire and Jamie override him, saying that they’ll have a service, and Roger will lead it.

Jamie carries Malva’s corpse into the surgery so Claire can stitch her wounds. Herself is in a verra bad way, shaking and hearing both Malva and Lionel Brown taunting her. Though she staves off her feelings of despair with a few slugs of whisky, eventually she’s reaching for the mask again. Meanwhile, some of the fisher folk start talking about how Claire’s got “a sharp tongue and sharper knives” and asking whether Malva was dead before Claire sliced into her belly for the baby.

The funeral is sparsely attended, and when Jamie and Claire try to help carry the coffins to the burial yard, they’re rebuffed harshly by the Christies. All of it is too much for Claire, but she’s given a bit of comfort by Lizzie, who reveals that it was she who came knocking at the door the day of Malva’s death. Claire had been thinking it might be her former assistant, and that the ether dream she had about her might have actually happened. In the surgery shortly after, Lionel Brown’s taunting voice is joined by some blasts from Claire’s unhappy past, including Geillis Duncan, Frank, Black Jack Randall and Dougal. And that’s when Jamie FINALLY notices that something is a wee bit screwy about his soulmate and they really talk about what’s bothering her.

‘WITHOUT YOU, OUR WHOLE WORLD CRUMBLES INTO DUST’ | Claire starts to cry as she admits what she’s been seeing and hearing, and she tells him that her ability to compartmentalize her feelings is collapsing in grand fashion. She suddenly feels responsible for everything — including Bree’s rape and Roger’s stint as a slave — because none of it would have happened if she hadn’t been “selfish” and gone back in time to be with Jamie again.

Jamie points out a different way to look at it: with her as the lynchpin that made their family possible and keeps them together. “Without you, our whole world crumbles into dust,” he says. As she sobs, he reminds her that after Wentworth, “you found me in the dark.” He asks her to let him in, by way of not resorting to the oblivion of ether, so he can do the same for her. Then he kisses her forehead and holds her close, but still… Jamie’s face looks (understandably) worried.

At the very end of the episode, Richard Brown and his men ride up to the Big House, guns ablazing: They want to arrest Claire for the murder of Malva Christie. 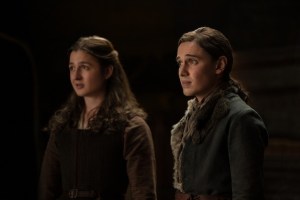 A LOVE STORY, IN THREE PARTS | Remember when Lizzie started feeling badly a few episodes back, and Bree sent the Beardsley twins to her place with the ointment to help her malarial fever? What started as medicinal turned into foreplay as they both rubbed it all over Lizzie’s body, and… oops. Now Lizzie is pregnant, and she’s not sorry — though Jamie knows he’s got to handle this situation before everyone on the Ridge finds out and feeds it through the gossip mill.

He demands that Lizzie marry one of the Beardsleys, though she refuses to choose. “Ye dinna understand, they’re one soul in two bodies!” she protests. (Side note: My favorite part of this episode, aside from Sam Heughan’s line delivery on “vegetarians” in a conversation with Roger, is how thoroughly he infuses all of Jamie’s dialogue with Lizzie with a sense of GOOD GOD WOMAN I DINNA HAVE TIME NOR ENERGY FOR THIS.) Jamie decides that the boys will draw straws for Lizzie’s hand, and Kezzie gets the short stick. So Jamie handfasts them right then and there, telling Jo to leave the Ridge the next day and not come back until the child is born.

But what Jamie doesn’t know is that Lizzie and Jo go to Roger and Brianna’s that night and ask Roger, who’s decided he’s going to go get ordained to be a pastor, to handfast them, letting them in on the pregnancy news but tidily ignoring to mention the handfasting that happened earlier at the Big House. And when Jamie finds out what happened the next morning, courtesy of Bree and Roger on their way out of town, what’s a laird to do?

Now it’s your turn. What did you think of the episode? Are you looking forward to the finale next week? Sound off in the comments!