Sometimes keeping your cool and not making waves will still get you voted out of Survivor.

In Wednesday’s edition, Maryanne, Romeo, Tori and Chanelle remained at the bottom, while a majority alliance of seven continued dominating the tribe’s decisions. Despite Romeo’s unintentional attempt to talk his way out of the game, Mike got what he wanted and Chanelle Howell went home with seven votes to her name. (Click here for a full Episode 8 recap.)

Below, Howell talks to TVLine about playing from the bottom, her biggest mistakes in the game and why she chose to risk her vote on the day of a pivotal Tribal Council.

TVLINE | We’ve got to smash an hourglass here, and go back in time to Episode 3. Why did you choose to risk your vote when you went on your trek?
CHANELLE HOWELL | That’s a great question. There’s a lot that we don’t see. The challenge itself was brutal, and I’m not gonna toot my own horn, but I carried the second half of that challenge. I really did. That’s why when Jeff says, “Taku, who do you want to send?” immediately, they were like, “Chanelle,” because I looked like the strongest person in my tribe. I was exhausted walking up that hill. I was stumbling, glazed over, delirious basically. We get to the top of the summit, and what we see is me saying, “I can’t risk my vote,” but what we don’t see is the rest of that conversation, which was, “OK, if it hurts both of us, neither of us will touch it. If it helps both of us, both of us will touch it.” What we didn’t talk about was the in-between. When we got to the ship wheel, I was like, “We said if it hurts both of us, neither of us will take it. So he’s not going to take it… I’m going to take it then!” And he thought the exact same thing.

The one time you should feel like, “Yes, I want to take a risk in this game” is when you are safest. I knew I could leave my tribe for the entire afternoon before Tribal, and my name would not be on the lips of any of my castmates. And it wasn’t! So when you do take a risk in the game, you are damn sure you are safe, and I knew I was safe. I was like, “If there’s a time to take a risk, it’s now.” Also, I had really bad communication with Omar, ultimately. That’s what it was. The biggest mistake was honestly not clearly saying to Omar, “Can I take it?” and us not having that conversation. Everyone’s like, “Why didn’t you protect your alliance?” but I was sitting in between two alliances. I was aligned with Hai, Lydia and Daniel, and also with Mike, Jenny and Daniel. In any world, someone from my alliance was going home.

TVLINE | Let’s say you did have your vote that night and Lydia goes home, how would Jenny have changed the rest of the game for you?
Jenny would’ve been a game-changer. If Jenny had stayed, I would’ve tried to rebuild a relationship with Hai, like, “Hey, Mike had an idol, I knew this, I had no other choice but to vote that way.” I think Jenny, Mike, Daniel and I would’ve been a solid four going into the merge, honestly.

TVLINE | When the merge first began, did you have any inkling that you might be on the bottom?
I wasn’t delusional! I knew I was on the bottom. I would walk up on those conversations and people would scurry away. I’m like, “OK, I’m clearly not in the core.” So I knew I was on the outs, I just didn’t realize that the bullseye was right on my head. I came into the merge and I was like, “I’m not going to throw my tribe under the bus.” I probably should have, but I didn’t. The other thing which we didn’t fully see in last week’s episode: When we’re at Tribal Council and Lydia goes home, Hai looks over to me at Tribal and goes, “It’s Lydia,” but he mouthed it to me, so I thought his mouth was saying “Jonathan.” When we get back to camp I was like, “Dude, you told me Jonathan!” and he’s like, “No, I mouthed Lydia!” Which I do believe he probably did. There’s so much going on at Tribal you can’t fully read lips well. At that point I was like, “Why did you wait until Tribal to tell me about this?” and then it just clicked: If I didn’t think I was on the outs before (which I did), I am clearly on the bottom. 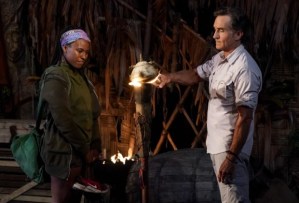 TVLINE | Mike seems to be playing a killer social game and Jonathan is an absolute beast. Was there ever any talk about cutting one of them?
With Jonathan, most people were probably thinking, “He’s going to be my meat shield. People are going to want to gun for him because he’s big and winning everything.” With Mike, I don’t think he was on anyone’s radar immediately. In a group of 11, you could make a very aggressive, hard move like, “We should get this person out,” or you could just be like “Anybody but me, I’m good!” Once you have your name out there, it’s very hard to recover from because you will always be a decoy vote. It’s like, “Oh, we can just split the votes on this person because they’re used to getting votes.” At that point in the game, I think it’s more so like, “How do I just shield myself? How do I stay out of the crosshairs?”

TVLINE | At the challenge, Jeff offered up a deal for the tribe to earn a stash of rice. Did you consider not playing in the immunity challenge?
I was always playing. I actually said in one of my confessionals, I was like, “Y’all can sit down for rice, and I’ll still vote you out.” I know there was that whole, “Oh, if you sit out, we won’t vote you out.” I would still vote you out and I’m sure these people would too. There’s no way that I get all the way to this point of the game and don’t play in an individual immunity challenge. I would’ve been devastated if I went home and didn’t have an opportunity to play. Honestly, the best-case scenario for me was that everyone played so that there was no sway to safety, you know?

TVLINE | You seemed to be playing on the down low. Was there anything you did that we didn’t see in the edit?
You don’t see a lot of my strategy in the episode, weirdly enough, but I did talk to everyone. I had a lot of group conversations. I was pretty close to Omar. I pulled Drea aside and was like, “Are you good with Romeo?” and she was like, “Yeah, he’s unraveling.” I talked to everyone. I didn’t think that I was completely in the clear, but I didn’t know the bullseye was right on my nose. Ultimately, I think the best thing for me to have done in that moment was to be like, “I’m going to chill. I’m going to lay back. I’ve had my conversations.” We probably could have seen Romeo go if Mike hadn’t dug his heels in. 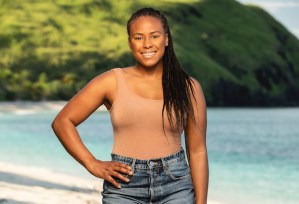 TVLINE | Did you consider using your Shot in the Dark?
I thought about it, and in retrospect, I 100 percent wish I played it, but I just thought there were so many targets on the board that it was too early for that. I think not playing my Shot in the Dark was probably one of my top two mistakes in the game.

TVLINE | The other one being… ?
Not having clear communication with Omar while at ship wheel island.

TVLINE | Anything you think you could have done differently to try and stay in the game?
Yes and no. Yes, because I feel like if I was on that beach today and had the knowledge that I was about to go home, I would’ve hustled and bustled. I would’ve tried to do something in my power. Would it have been smart? I don’t know. Potentially. Maybe I would’ve gone to Mike and pleaded with him. Ultimately, everyone’s looking for an easy vote. The second that people start trying to change things, people are nervous and not feeling it. Could I have shifted the vote? Maybe… maybe. But no one was willing to jump in front of a train, and objectively, with good reason.

TVLINE | Who’s playing the best game right now?
On my last day, I said Omar is head and shoulders playing the best game. The reason that I knew that was because during that first half of the merge episode, where me, Omar, Mike, Drea and Romeo were all not safe, Omar’s name was the only one that wasn’t on the table. It wasn’t explicitly said that his name wasn’t on the table, but I was like, “Why isn’t Omar up for grabs? He’s playing a great game. Good thing I’m aligned with him!”