There are many aspects of Survivor that we armchair experts will never understand. The hunger and exhaustion, for starters. See also: the paranoia.

Time and time again we’ve seen players talk themselves right out of the game when they weren’t even the target du jour. In Wednesday’s episode, that’s exactly what Romeo almost did, as dread and distrust sent his brain spinning when the crosshairs were already locked and loaded on someone else.

In addition, another beware advantage flooded the game, and despite it being yet another Season 41 copycat, the game added one colorful (heh) little twist that I’d love to see more of. Let’s break it all down!

Tori, Chanelle, Romeo and Maryanne are on the outs, but if you ask Chanelle, she’s playing chess while everyone else is playing checkers. While she grills Hai about why she was left out of the Lydia vote, Romeo’s doing the same thing to Drea. Maryanne, meanwhile, knows she’s at the bottom, even though her former Taku members keep saying they have her back. But she’s feeling “too weird to be with the cool kids,” and it’s triggering her negative experiences from elementary school.

The next morning, Mike talks to Omar to learn more about the Islam religion. While he does seem like a genuine guy who’s super open-minded, you’ve got to admire the guy’s social game. It can be sincere and gameplay, right?

REWARD | Jeff tells us he’s hiding a beware advantage on the sit-out bench — the same spot where it went unclaimed last season. For the challenge, players must maneuver a set of buoys through a ropes course in the water, then shoot them all into a basket. The reward? PB&J and chips! One player won’t compete, and that player is Maryanne after she pulls a gray chip. Drea, however, says she doesn’t like PB&J and offers to swap out with the chatty Cathy. Did she do that on purpose? (From the looks of it… maybe?) While everyone runs the challenge, Drea finds the advantage and stuffs it in her pants. Her dislike of PB&J wasn’t for show, and even though she’ll stay hungry, she feels she got the real reward.

Omar hits an impressive four baskets, but Jonathan steps up and sinks five in a row for the other squad. The people getting the eats: Tori, Rocksroy, Chanelle, Mike and (who else?) Jonathan. What can’t this guy do? 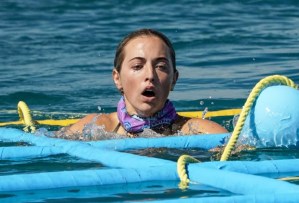 BEWARE | Drea unravels her package, which is actually a clue to the advantage hidden under a coconut near the water well. She finds the right spot, reaches down and gets covered in red paint! This is a move of sheer genius by the producers. Now, if someone ambushes her, she’ll have to explain why the heck her entire arm looks like a cherry. She attempts to wash it off at the water well (keyword: “attempts”), but it still leads to her being caught red-handed… literally! More of this creativity, please! Brilliant.

She reads her advantage and it’s… the Knowledge Is Power power. Yet another repeat from 41. I could go off on a loooong tangent about how repetitive these advantages have been, but I will spare you. This time. (Though be sure to tell me how you feel about them in the comments section.)

The rules are the same as last season: Drea can ask one player if he or she has an advantage or an idol. That person can’t lie and must fork it over. Now to recap (since that’s what we’re here for): Drea has an amulet, an idol, an extra vote and the Knowledge Is Power advantage. I’d have to dig deep into the annals of Survivor history to check, but has anyone ever held this many idols/powers at the same time? (Aside: With so many advantages in this game, can someone, anyone just play something tonight?!)

Drea goes back to camp where Tori notices her arm is red. She tries to play it off like it was paint they got to decorate their new flag, but Tori wasn’t born yesterday. Not only is there no paint on their flag yet, but Tori notes that Drea’s being hella shady with her body language. In sum: These two women still have it out for each other.

IMMUNITY IS BACK UP FOR GRABS | Jeff tells us he’s once again going to give players the option of sitting out of the challenge for an individual portion of rice. Last season, if enough players agreed to sit out, the host offered to give them a three days’ supply of rice. This time, he’s going to try to get a whopping six players to sit out, and will give them enough rice for four days if it happens. Will anyone take the bait? 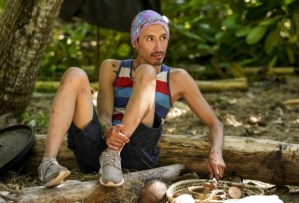 In the challenge, players must balance on a perch, while holding a buoy with two handles. The last person standing wins safety. Jeff makes the rice offer and Lindsay and Drea offer to sit out. Maryanne agrees, too, and makes an emotional plea to the gang for a fourth person to step up. Jeff accepts four sit-outs after Omar agrees. Then, the challenge begins.

Hai’s up on his perch for approximately two-and-a-half seconds, earning the hypothetical equivalent of a Survivor participation trophy. Rocksroy, Mike and Romeo don’t last much longer, leaving Jonathan, Tori and Chanelle left standing. After an ultimate balancing showdown, Tori walks away with her second individual immunity win.

THE SCRAMBLE BEGINS | Someone’s gotta go and it’s not looking good for Chanelle, Maryanne and Romeo. Mike is pumped to write Chanelle’s name down, while the group tells her the plan is Romeo. She seems like the likely out, until Tori plants a bug in Romeo’s ear, which causes him to spiral out of control. He confronts Rocksroy about hearing his name, and soon, Romeo’s questioning everyone in the world: Drea, Omar, the camera operators, producers, the frenzy of sharks chowing down on schools of fish. His paranoia is out of control, and all the unnecessary last-minute chaos irritates Hai, who tells Omar they might have to change the plan because what’s happening is “ridiculous.”

TRIBAL COUNCIL | Jeff asks Romeo what’s been going on at camp, and he says that although it’s a unified group, that can only last so long. Hai then calls out that if someone is going around creating havoc, they’re most likely out of the majority. Drea says it’s tough because even if you align with someone, what they do and say can affect your game. There’s this whole car analogy about a pretend road trip or something and I didn’t quite follow most of it, but according to Hai, if you’re not in the driver’s seat, you’d better have a seatbelt. (I’d argue that everyone should probably wear a seatbelt, but that’s just me and the law.)

The group votes and unfortunately for us, zero advantages are played. (Sad face.) Romeo may have almost talked himself out of the game, but Chanelle is voted out and becomes the first member of the jury. (Read our Q&A with Chanelle here.)

Did the right person go home? Are you itching for these advantages to shake things up? Hit us with your thoughts by dropping some Comments.