It’s the end of Tommy Egan’s first season flying truly solo, but he’s by no means going it alone by the time Power Book IV: Force‘s finale comes to an end.

But is he backed by the Serbs? CBI? Or maybe even the Flynns? Read on to find out — and along the way, learn who dies in “Family Business.”

DON’T MESS WITH DIAMOND | With D-Mac in the hospital, Tommy is ready to throw down. “You ready for a war, kid?” he asks Vic. And Egan is feeling pretty strong, because — for a very high price — he’s got the Serbs’ support. Walter Flynn is feeling pretty strong as well, because he’s got four heavy hitters from the Irish mob backing him. But Tommy makes short work of one of the visitors from the Emerald Isle — garroting him from behind while he’s getting his jollies in the alley behind Dr. Parker’s Office — which doesn’t help diffuse any of the tension that’s building among Chicago’s competing drug factions.

Meanwhile, over at the barbershop, Diamond has a bad feeling after Jenard calls and wonders where he is. So Diamond hustles himself and Adrian outta there just in time to miss Blaxton and his men, all of whom are there to kill him. Diamond then gets Blaxton alone and, with a baseball bat as a helper, gets him to admit that Jenard was the one who put out the hit on his life. Then Blaxton taunts Diamond that he got soft while he was in prison, so Diamond turns around and very un-softly shoots him in the head… then leaves his bloody corpse on Jenard’s dining-room table.

GUESS WHO’S BACK? | In case you’re wondering, D-Mac aka Darnell is in a lot of pain, but he’s doing OK. JP is hanging out in his hospital room as the boy convalesces. “I’m sorry I didn’t even recognize you outside my club,” JP says, his voice full of emotion. “I let you down.” And when Tommy arrives, JP doesn’t want anything to do with his half brother. Tommy points out that D-Mac is his nephew, and that he thinks the kid is to smart to get wrapped up in his uncle’s line of work. “I ain’t going to let him be about this life any more than you are,” he promises. 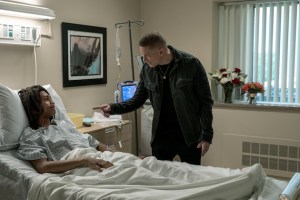 Tommy’s happily footing the bill for D-Mac’s hospital stay, and he leaves a bulky Serb outside the door to make sure nothing happens to the kid. JP asks his brother to find out “who the f—k did this to my son.” Tommy gravely assures him, “No doubt” and agrees to swing by Miriam’s old house to grab some medical information D-Mac’s doctors need.

When Tommy gets there, he finds the door ajar and assumes some crackheads have broken in… but instead it’s Kate (!) whom he catches taking a crowbar to the walls as she looks for the money she assumes her mother stashed there. She takes his presence in stride (“Tommy! Of course you’re f–king alive”) and can barely go a minute before she’s trying to push his buttons. “So, what? You kill one brother, you’re here to kill the other?” Exasperated, he offers her a roll of money to take off, and she’s definitely tempted. But when she hears that JP has a son — meaning she has a grandson — she demands that he take her to meet D-Mac. He hesitantly agrees, but says the introductions will have to wait.

‘CHRISTMAS IS CANCELLED’ | And that’s because Claudia has just announced to her father that Tommy makes Dahlia and she knows exactly where his lab is. So the Irish mob guys and Vic, who demands justice for Gloria’s death, storm the place. But Tommy and the Serbs are ready for him. “It’s about to be the Fourth of July up in here, because Christmas is cancelled,” he announces just before the shootout begins. There are a LOT of bullets exchanged, and in the end, the only surviving members of Team Flynn are one Irish mobster and Vic.

Knowing that stuff is about to go down, Liliana releases Tommy’s chemist from her duties, gives her a pile of cash and tells her to run. Too bad Claudia catches her on her way out of town and — buoyed by a secret Dahlia deal she’s made on the side with the Irish — prompts the doc for details on Tommy’s weak spot. This will prove important in a few minutes. 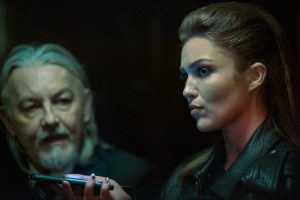 WHO’S FOR WHOM? | At this point, there’s a whole lot of talk about who’s supporting whom, and a bunch of shifting allegiances, so I’ll try to keep it very simple. Jenard approaches the Serbs and offers to return the pipeline to them, but they’ve still got a Flynn problem. So Jenard proposes brokering peace between Walter and the Serbs in exchange for the Serbs backing him against Tommy and Diamond. They’re too smart to get in between a family beef, but they agree to the Tommy part.

So Jenard goes to Vic and Walter… and they take him up on his proposition. Vic is incensed that they’re going to let the Serbs chill. “The best move for the future: I’m going to join with CBI, cut this off at the root. Then we’ll kill the invader that killed your Gloria,” Papa Flynn says. “And if my brother gets in the way, we’ll take his ass out, too,” Jenard adds. Then Claudia gets Jenard all by himself and reveals that Dahlia is her product, she’s got the chemist, and she wants him to be her distributor. In exchange, Jenard lets Claudia know that Tommy had nothing to do with the hit on Vic and Gloria.

Somewhere else in town, Diamond and Tommy meet and realize that they’ve always been pretty straight with each other and that they have some mutual enemies. So they agree to team up. And then Tommy gets a call: The Flynns have JP, and they want Tommy to give himself up in exchange for his brother’s safety.

ALLIANCES SHIFT | So at the meet that night, it’s Liliana, Diamond and Tommy against everyone else. Diamond and Tommy play it like the former caught the latter trying to skip town. Diamond yells that Jenard tried to kill him and CBI is about to split in two, which is news to the CBI soldiers who’ve accompanied Jenard. Eventually, Jenard tries to shoot Diamond but another CBI member grabs his arm at the last minute… and that’s when the fight really gets underway.

Everyone is shooting. Diamond goes after his brother. Tommy goes after the Flynns. Liliana sneaks around the back and takes out a lot of Flynn’s men, but then Claudia notices and shoots her. Diamond ultimately chooses not to kill Jenard, but demands that they split CBI territory and that the soldiers that want to come with him will be allowed to leave.

It all comes to a head when Walter has JP at gunpoint and Tommy has Vic at gunpoint. Tommy shouts that it was Walter who wanted Gloria dead, and when Claudia backs that statement up, Victor FINALLY believes. They trade JP for Vic, and Vic immediately slams Walter against the hood of the car. Walter taunts his son that he can’t kill him. “You’re right,” Vic says in disgust. “I’m not like you.” 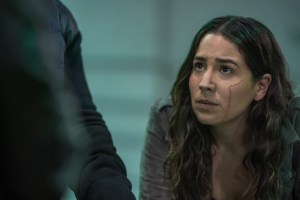 ADIOS, LILIANA | With the shooting done, Tommy runs over to poor Liliana, who’s bleeding out on the ground. “Who shot you?” he cries, pulling her into his arms, but she can’t answer. Claudia chooses THAT MOMENT to approach and mention that they can work out a mutually beneficial business plan, but he yells at her that she’s on notice. And then as Tommy yells at everyone to help him get Liliana to the car and get her some help, JP and Diamond gently tell Egan that she’s dead, and they’ve gotta go. “I was wrong about you, Liliana,” Tommy says to her corpse, “you was loyal to the end.”

THE AFTERMATH | And then, all of a sudden, we’re hanging out with some law-enforcement types. First we see them talking about a new figure in the Windy City drug game, and “whoever he is, he’s making big plays, he’s dangerous, and he’s not just passing through.” They don’t know this mysterious figure’s name, but they think they have a photo of him… and of course, it’s Tommy. “He’s like a ghost,” one woman remarks.

Then we move to check in with Medina (remember him from Power?), who is now special agent in charge at the Drug Enforcement Administration, and he’s Blanca Rodriguez’s boss. She tells him about the Irish mob being in Chicago and the latest violence that involved a bunch of Serbs and local Chicago players. She wants to move on it, but Medina says nope: Give it to the Chicago office. That look on Blanca’s face, though, means it’s unlikely she’s going to give up.

And then as Claudia and Vic drink to Gloria’s memory and vow never to trust their father again (yeah, OK), Diamond and Tommy assess the small territory Diamond now holds. They agree that they’re no longer going to mess with Dahlia. Oh, and Tommy’s business goals? “I want the whole f—king map,” he declares.

Now it’s your turn. What did you think of Power Book IV: Force‘s finale? Grade the episode —and the season as a whole — via the polls below, then hit the comments to elaborate!