Even The Winchesters executive producer Jensen Ackles had his doubts about whether a Supernatural prequel about John and Mary Winchester could work. After all, much of the backstory of Dean and Sam’s parents was already told (and even shown in episodes like Season 4’s “In the Beginning”) on the mothership series.

“To be honest, I was like, ‘I don’t know if we can do this,'” Ackles recently told TVLine while sitting in his car, watching filming on the CW pilot, “and then it took [writer] Robbie [Thompson] and me sitting down going like, ‘Well, we know we have to do this, and we know we have to do that, but if we just connect those dots with a straight line, that’s not entertaining. That’s boring. That’s a simple story. If we connect those dots in a much crazier, wild Supernatural way, then we’ve got a show.’ So that’s what we’ve been doing.”

Those dots, of course, are things that longtime Supernatural viewers have learned about John and Mary, like that Papa Winchester hails from a line of Men of Letters, while Mary Campbell grew up in a family of hunters. So how will the prequel navigate the mythology that’s already been established?

“That’s kind of the exciting thing, in my opinion, is that the waypoints or the tentpoles that were established on the mothership, as we lovingly call it, those will get touched on,” Ackles says. “But we’ll get to those waypoints in a way that we probably didn’t expect. And that’s what we’re really having fun with is, like, the story is coming together. It’s not the washed version. It’s not the sugar-coated version of how mom and dad met. This is like what really happened.”

“But we do play into the moments that were discussed and that were talked about,” Ackles continues, “just maybe in a slightly varied way that seems like, ‘Whoa, wait, we knew that happened, but I didn’t know that’s why it happened or that’s how it happened.'” 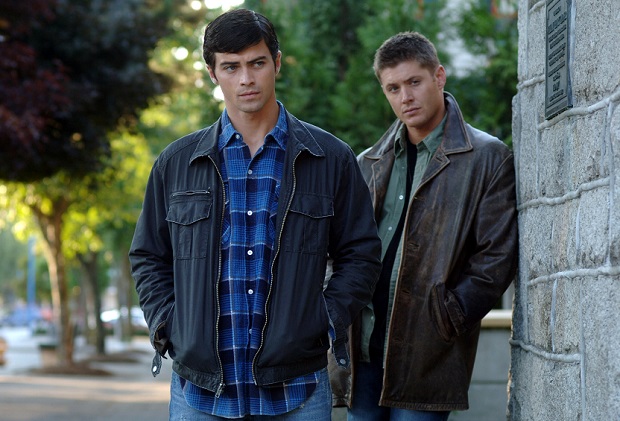 The potential series is described as the “epic, untold love story of how John met Mary and how they put it all on the line to not only save their love, but the entire world,” per The CW. When the pilot picks up, young John (played by The In Between‘s Drake Rodger) has recently returned from Vietnam to his hometown, “where traces of his father’s past lead him to a secret organization and a whole new war as a hunter.” Meanwhile, 19-year-old Mary (American Housewife‘s Meg Donnelly) is considering quitting the family business after losing someone close to her — “until her father’s disappearance and the arrival of newcomer John Winchester forces her to lead a new team.”

You might be wondering how that is possible when, from what Supernatural told us, John didn’t know about demons and hunters until after his wife Mary’s death. “Obviously, we’ve got a massive fix for that. But we get to that point, and we play the ‘Ooh, that’s why’ kind of a thing,” Ackles says.

In addition to executive-producing The Winchesters with his wife Danneel Ackles, the actor/EP will narrate the project. And should it go to series, will Ackles — who helmed six episodes of Supernatural and a recent installment of Jared Padalecki’s Walker — also step behind the camera to direct? (Arrowverse and Smallville vet Glen Winter is directing the Winchesters pilot.)

“I hope so. Obviously, I gotta get approved by the studio, but I think they know me, so I might have a good chance,” Ackles replies with a laugh.