At the beginning of the episode, we meet Wanda (played by guest star Allison Tolman, Fargo), wife of Willy, that chauvinist radio host Joyce encountered earlier in the season. Turns out, Wanda has been reading Minx and was very inspired by the article about marital rape. So when Willy is a jerk one night and demands both sex and a spicier meal, she adds extra jalapeño to his plate… then sticks her capsaicin-covered hands into his boxers as requested. Soon, he’s fired up, but not in a good way.

The incident causes Willy to sue Bottom Dollar, and Doug’s lawyer recommends offering a settlement and moving on. But Doug sniffs a potential PR windfall and wants to countersue. Meanwhile, Joyce — who’s still mad about the Billy photos — is surprised to learn that Tina and Doug are a couple, and that Tina has been promoted to managing editor. “Have you already found a replacement for me, as well?” she wonders. What Joyce doesn’t know: Doug is kinda working on that. 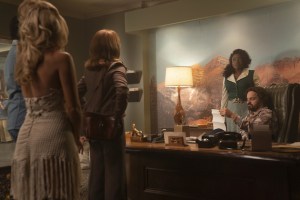 One piece of info that comes out of the suit is that Joyce has an ownership stake in Minx, and she decides to do something with it. So Joyce, flanked by Richie and Bambi (with whom Shelly is shacking up secretly), confront Doug and ask him to cease publication of the magazine. He thinks it’s cute, then gets Bambi and Richie alone to point out that they wouldn’t have their careers without him. He also makes a strong play for Richie to stay with the magazine, and Richie is definitely swayed by the prospect of an augmented role at the company.

Then Councilwoman Westbury goes on Willy’s show, advocating for a ban on pornography production in the San Fernando Valley, and everything explodes. More people sue Minx. Hate mail pours in. There’s a protest outside the office. Eventually, Doug’s lawyer advises him that the most prudent thing to do is to fold the mag and continue with Bottom Dollar’s other publications.

At one point, when the Bottom Dollar crew is in the office, Bambi attempts to calm the protestors by telling them that she’s retired from nude modeling. This incenses the picketing men so much that they storm the building, trapping Joyce & Co. in the production room. To pass the time during the siege, Bambi starts reading some of the letters that have piled up… only they’re not hate mail: They’re from people praising Minx for making their lives better. And when Tina calls Doug’s Russian heavies, they show up and crack skulls until the protest ends.

But there’s no easy, everyone’s-happy resolution to the finale. We see that Tina has gotten accepted to multiple business school programs. Shelly realizes that she can’t leave her husband for Bambi and returns home, though she’s still wearing the bracelet Bambi lent her for courage. And Aphrodisia author Wendy Mah, whom Doug had been courting to replace Joyce, writes a scathing article about Minx that is published in Betsy, the magazine for which Joyce’s friend, Maggie, works.

But the real reason Wendy didn’t wind up at Minx, Doug tells Joyce when he swings by her place, is “because she’s not you.” He apologizes for making everything about their business partnership so ugly of late, and he wants to fix Minx‘s problems together, as partners. “I’m not sure I’m interested in giving away my power anymore,” Joyce says, hinting that she might try to make a go of things alone. “I’ll tell you what,” Doug replies, “Minx is yours. I don’t want to do it without you, so take it.”

Joyce clearly isn’t expecting this offer, but she thanks him, and he wishes her good luck as Bobbie Gentry’s “Fancy” plays in the background.

Now it’s your turn. What did you think of Minx‘s finale and of the season as a whole? Grade ’em via the polls below, then hit the comments with your thoughts!