Four years after leaving the French Quarter behind, Charles Michael Davis is bringing Marcel Gerard back to New Orleans on Thursday’s Legacies. And as he tells TVLine, his former Originals co-star Danielle Rose Russell had the perfect response to his return: “I would have thought you’d have been back sooner.”

TVD, Originals and Legacies: 28 Actors Who Jumped Between Shows

Davis makes his Legacies debut alongside Nathaniel Buzolic, who’s also appearing on the spinoff for the first time. They’re joined by returning guest stars Claire Holt and Riley Voelkel, officially making this the largest Mikaelson family reunion since The Originals ended in 2018.

But Davis’ time as Marcel stretches back much further. The cool, confident karaoke king was introduced during The Originals‘ 2013 backdoor pilot on The Vampire Diaries, making Davis one of the few actors to have appeared on all three shows. And he still remembers filming that episode, appropriately titled “The Originals,” like it was yesterday.

“It’s cemented in my head because it was such a moment for me and for my career,” Davis tells TVLine. “That’s the line. My life completely changed after that. I remember meeting Joe [Morgan], I remember having dinner with him and Daniel [Gillies], I remember doing rehearsals with [director] Chris Grismer and [writer] Julie Plec, and I remember going to New Orleans. Some things I’ve intentionally forgotten, but I remember a lot of it. Being there for five seasons, that show was so much a part of my life.” 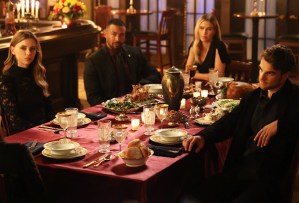 And while there’s still the minor issue of Hope’s suppressed humanity to contend with, rest assured that the episode will also give fans plenty of updates about her extended family members, including at least one whose name Legacies has yet to mention.

“It did feel like we were home,” Davis says of shooting Thursday’s episode in Conyers, Ga. (which served as The Originals‘ “New Orleans”) and in a reconstructed locale from the show. That scene, where everyone is “sitting at the table, reminiscing and laughing about things,” was Davis’ favorite to film. “Especially now with the restrictions of COVID and all that, to be sitting and chatting and seeing people’s faces was a good little bubble to be in for a few hours.”

It’s guaranteed to be an emotional hour for all longtime fans of the franchise, including *checks notes* basketball great Shaquille O’Neal?

Davis tells us: “I was working on NCIS: New Orleans during the pandemic, and I checked my phone and saw I had a DM from ‘Dr. Shaquille O’Neal,’ or whatever he goes by on there. I thought that it was a joke, but I saw it had the little blue check. So I opened the message. He was like, ‘Hey, I just started watching The Originals. It’s a great series, you’re a great actor, keep up the good work. God bless. And I wrote back like ‘WHAAAT?!’ So he sent a video of him sitting at home on the couch, then reversed the phone and showed that he was watching an episode of The Originals. And he goes, ‘You’re a bad dude, Marcel.'”

Your thoughts on Legacies‘ big Originals reunion? Are you pleased to learn that Shaq is a fellow fan? Whatever’s on your mind, drop it in a comment below.