The Very Bad Thing that happens to Claire in A Breath of Snow and Ashes takes place in this week’s Outlander, and it’s barely over before the Frasers’ next trial begins.

There’s a lot to get through in “The World Turned Upside Down,” so let’s jump right in, aye?

IN WHICH LIZZIE NEEDS TO FOCUS | When Claire and Jamie realize that no one’s heard from the MacNeil family in a while, she rounds up Lizzie, Malva and Bree to accompany her as she checks on them. What they find is horrible: The entire family is shut up in their cabin, very ill with dysentery — or the “bloody flux,” as it’s colloquially known — and they’re concerningly dehydrated. “Don’t touch your faces!” Claire advises her helpers, who rush to see how the children are doing. The baby is barely breathing and can’t swallow, and it’s a literal s—tstorm in there, but Lizzie still thinks it’s very important to admonish Claire for swearing when she realizes how close to death a good number of the MacNeils are. Oy.

Then the baby dies. And so does Mrs. MacNeil and at least one of her children. Lizzie is near the wee MacNeil when she passes, and she COVERS HER MOUTH with her hand. Lizzie! You had one job, and yelling at Claire wasn’t it! 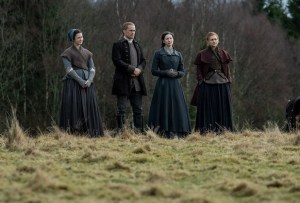 Pretty soon, a large number of Ridge dwellers are either dead or ill with the same disease — and when Claire passes out at a funeral, her family thinks she’s gotten it, too. Over the next several days, Malva joins Jamie, Bree, Roger and Lizzie as they watch over a sweating, shaking, delirious Claire. One night, while they’re both taking a break in the kitchen, Malva makes willow bark tea for Jamie. They chat amiably. Eventually the conversation comes around to Jamie’s heritage. “I come from a long line of traitors, thieves and bastards,” he jokes. “I dinna believe it sir,” she says. “You seem a fine gentleman to me.” And because his own heart’s blood is near-dying upstairs, Jamie doesn’t notice Malva near-drooling over him in the corner.

IN WHICH CLAIRE SAYS ‘OH HELL NO’ | As she suffers, Claire’s fever dreams subject her to images of storms, a snake and her own heart outside of her body. She opens her eyes at one point to see Jamie, blurry, drinking as he leans against the window of their bedroom, and Malva is comforting him. Even half dead, Claire is like, “THIS WILL NOT STAND.”

So she refuses to die, and Roger is by her bed when she wakes up. Sometime while Claire was out of it, Mrs. Bug and Malva cut her hair in an old-wives’-tale-fueled attempt to bring down her fever, and now she’s sporting a rough pixie cut. Like, Tinkerbell after a bender cut. Anyway, the important thing is that Claire is alive and her fever has broken. No wait, Claire thinks the most important thing is that Jamie not see her in her current state. “He’s seen you — it — already,” Roger tells her, and when asked, he adds, “He didn’t say anything. He just cried.” 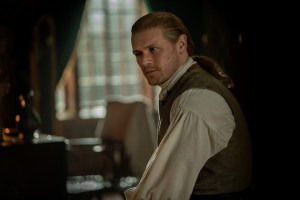 Then Bree rushes in, hugs her mom and tells her that she’s pregnant, and Jamie follows. As Bree evens out her mom’s new ‘do, Claire demands an update about the illness’ sweep through their community, so he gives it to her: A lot of people died, the dysentery spread from a dead moose in the river near the MacNeils’ cabin, pretty much everyone who’s going to live is on the mend, and Tom Christie has been extremely ill with headache and fever. When Mr. and Mrs. Fraser are alone, she tells him that she dreamed of “a snake, and it was in this house” (#foreshadowing), and he rather chirpily says, “I’d be very angry, Claire, if you’d died and left me.” Well call me a bag of Baked Lays, because I’m a little salty. I’ve already noted the reasons that this scene should carry more emotional weight than it does. All that aside, and without the immediacy of Fergus’ attempt to harm himself, I still don’t think Jamie would be this chipper five minutes after Claire stopped knocking on heaven’s door.

My bruised Sassenachy feelings are assuaged a bit by the Jamie/Claire scene that takes place a short while later, when she finds him sleeping on the floor next to their bed in an effort not to interrupt her rest. She tells him to get in next to her, and then they engage in the kind of dialogue I love: a little sexy, very devotional, funny and natural. At one point, she mentions that she finds his calloused hands “deeply erotic.” He raises an eyebrow, then casts an eye to his lap. “Well, if I dinna have callouses down there, it’s no fault of yours,” he responds dryly. THIS is how I like my Claire and Jamie: heart-eyed and rumpled and never missing an opportunity to make a reference to Jamie’s wee bagpipe. 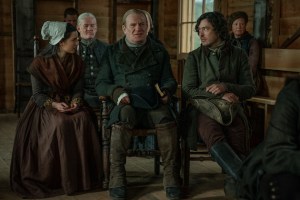 IN WHICH SAM HEUGHAN DOES SOME OF HIS FINEST WORK | I should also tell you that Claire has theorized that she and Tom Christie had the same illness, but that it wasn’t the bloody flux that plagued the rest of Fraser’s Ridge. And as the weeks pass, things seem to be getting back to normal… until Tom, Malva and Allan Christie roll up in front of the Big House and, icier than normal, demand a word with Himself.

Malva is pregnant, Tom announces, and she won’t say who the father is unless Jamie is in attendance. So Jamie kindly, though in pretty baffled fashion, asks her what’s up. “You know the truth as well as I do!” she shouts, crying, as she says the babe inside her was fathered by none other than James Alexander Malcom MacKenzie Fraser, the First of His Name, MacDubh of Ardsmuir Prison, Protector of Pretty Much Everyone, the Kilteesi of the Sickness of the Sea, the Dunbonnet, the Breaker of Lord John Grey’s Heart.

I believe neither Sam Heughan nor Caitriona Balfe have gotten the Emmy love that was deserved them, her for Season 2’s “Faith” and him for Season 1’s “To Ransom a Man’s Soul” — AND for the way he says, “What? WHAT?” in tones first confused then furious upon hearing Malva’s accusation. (Seriously, Heughan is great here.) As Jamie seethes and Claire reels, Malva talks about finding him bereft and drunk, “grieving in the dark” by Claire’s bed. Jamie allows that that happened, but that he sent her away. Her version? “He took me against the wall whilst you lay sleeping, so great was his need!” Malva cries, and Claire — who is over it — slaps her and leaves.

When Malva is able to describe scars on Jamie’s body that no one who hasn’t seen him naked would know about, it brings him up short. Tom proposes a contract in which Jamie will provide for the child financially, and Jamie grits his teeth as he orders the family to go.

IN WHICH JAMIE NEEDS TO LEARN HOW TO READ A ROOM | Jamie finds Claire in the stables and says he won’t apologize for something he hasn’t done, but she’s upset nonetheless — mainly because she saw them at the window but thought she’d hallucinated it. He maintains his innocence, but… “Claire, I do have something to tell you,” he admits. GOOD GOD MAN WHY ARE YOU DOING THIS NOW? Claire looks horrified as he unburdens himself about sleeping with Mary McNab, the woman Jenny sent to his cave just before he turned himself in to the British back in the day.

Claire understands — she was married to Frank for that time, after all — “I just wish you’d told me about it earlier.” And for the record, she believes him about Malva. But Jamie knows no one else on the Ridge will, and he’s kinda right.

When he leaves to attend the Provincial Congress (a lead-up to the Continental Congress), just about everyone shuns Claire. She goes to see Malva. “I think you’re a young woman who made a mistake, but it wasn’t with my husband,” Claire says gently. She staunchly assures Malva that the brouhaha won’t come between her and Jamie, but then she softens as she tells the girl, “I was proud to be your teacher.” Malva starts sobbing, and seems like she’s on the cusp of telling Claire what’s really up. But then stupid Allan comes out and starts shooting off his stupid mouth, calling Claire a witch. When Malva unhelpfully adds that she’s seen Mistress Fraser bring people back from the dead, I hope Claire starts mentally planning how to escape being burned at the stake a second time.

IN WHICH THINGS GET MUCH, MUCH WORSE | Poor Claire is having taunting visions of Lionel Brown while doing some gardening, but then a hangdog Ian shows up to confess: He slept with Malva, and the baby may be his. Claire points out that the kid might not be his: Obediah Henderson, for instance, aka the young man Roger caught bumping uglies with her on the meetinghouse floor.

Two months later, Jamie and Roger return from the congress. The gossip about Malva had beaten them there, Rog tells Bree, and likely was the reason Jamie wasn’t chosen as a delegate to go to Philadelphia. But there are much bigger problems much closer to home, starting when Claire hears Lionel Brown’s voice in her surgery and sees Malva approaching on the path to the Big House. Rattled, she huffs ether and lies down on the bed while the drug does its thing, not really hearing Malva knocking on the surgery door.

She wakes to Malva shaking her and saying she’s old, evil and going to lose everything — including Jamie — to Malva. Claire grabs her scalpel and holds it near the girl’s neck: Come near Jamie again, she threatens, “and I will f—king kill you.”

But was it real? Claire wakes up on the bed, pulls herself together and steps out into her garden… where she finds Malva dead, her throat slit. Claire cries even as she feels the girl’s belly and then makes the split-second decision to perform an emergency caesarian section, right there next to the snap peas or whatever. She hacks into Malva’s abdomen, delivers the baby and tries to resuscitate it, but it’s no good. Claire sobs as the tiny, bloody body lies inert in her hands.