Breathe, Bailey! Breathe! In Thursday’s Grey’s Anatomy, the threat of losing Meredith to The Clinic combined with an accreditation council’s visit to Grey Sloan to decide the fate of the residency program pushed Miranda to what looked like the brink of another heart attack. How worried did we need to be? And did Mer really have one foot out the door? Read on… 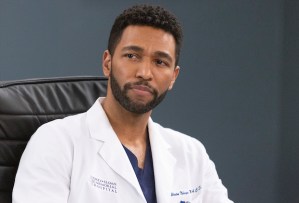 ‘GO IMPRESS SOMEBODY’ | As the episode began, Bailey psyched herself up for what promised to be a particularly trying day. Nick arrived at Grey Sloan via Catherine’s private jet and limo with a kidney for transplant. Helm visited Levi’s mom’s to tell him that he had to show up for the assessment to help save the residency program. “If you have any fight in you, any at all,” she pleaded, “get up.” Back at the hospital, Bailey and Richard prepped their colleagues for their interviews. But no, Maggie was told, they could not be told who had complained about the program. (We’d find out soon enough.) Richard was scheduled to be interviewed first, but he bailed — it was time for his physician assessment… by David and Kai, of all people! 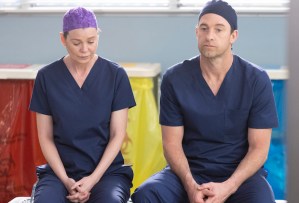 On grand rounds, the residents learned from Mer and Nick that the aforementioned kidney was being donated to a brain-dead patient. Wait, what? A pig kidney. Suddenly, the whippersnappers were plenty into the groundbreaking procedure. If it worked, it would be bigger than big! When the brain-dead patient’s wife showed up at the hospital, she was desperate to see him. But if she entered the room, it would be game over for the procedure. So Nick just held her as she cried. Sadder still, it soon seemed like the procedure hadn’t worked. 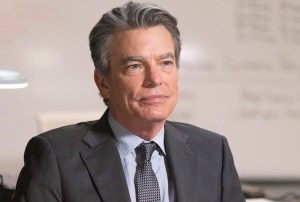 ‘YOU’RE TRYING TO POACH MEREDITH GREY!’ | Before Richard’s assessment, Amelia wished him luck, in so doing, revealing that Kai had blabbed about it to her. Alone with her new lover, Amelia didn’t exactly say to lie about the results, but she did impress upon Kai that it was important to the hospital that he pass. As his testing got underway, he seemed to do well. Even David assured Richard that slowing down a little was very different from being a danger in the O.R. But as they talked about the difficulty of finding a replacement for doctors as good as them, Richard deduced that David was trying to steal away Mer. You betcha! “The offer nearly broke the clinic’s budget,” Hamilton admitted. 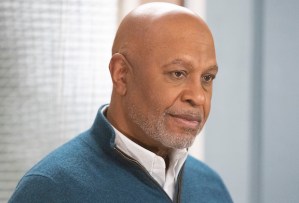 At Levi’s mom’s, Schmitt confronted his mother after discovering that she had posted all over the Internet, blaming Grey Sloan for him killing a patient while he was still basically a trainee. It wasn’t his fault, she argued, it was theirs for putting him in that situation. And just like that, she went tumbling down a flight of stairs! And right when Levi seemed like he was regaining his spunk! Immediately, he called 911, but it soon became clear that he’d have to leap into action himself before the ambulance arrived. Needing counsel, he rang Richard, interrupting his assessment. With Webber on the line, Levi cut into his mother to save her life. Just then, the ambulance got there to rush Mama Schmitt to Grey Sloan. 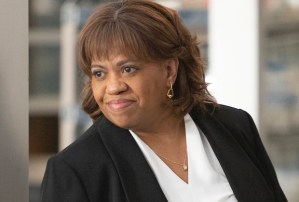 ‘MY HUSBAND LEFT ME AND I HAD A NERVOUS BREAKDOWN’ | As the accreditation team toured the hospital with Bailey, they happened upon the residents cheering over the opportunity to work with Meredith — a rare opportunity, noted an assessor. As the interviews got underway, Maggie and Winston were grilled about their relationship, including the one that the team imagined that they’d had when she was his teacher. Owen and Teddy were questioned about the deaths of soldiers exposed to burn pits. Link answered a question with a commentary on his sad, sad life as a single dad. Jo tried to sing Bailey’s praises, but the team did its best to turn her life choices against her. Jo wasn’t having it, though. She put them right in their place. Off a tip from Richard, Bailey confronted Mer about leaving Grey Sloan for Minnesota. “You’re still that same little girl who’s following her attending around, her married attending,” Miranda spat. “Why are you speaking to me this way?” Grey challenged her. Nick’s “here doing us a favor!” Suddenly, Bailey looked… dazed… like she wasn’t sure what was going on. 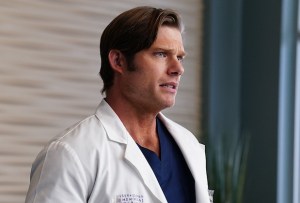 ‘IT’S ALL MY FAULT!’ | As the hour neared its conclusion, Meredith marveled at the way Bailey had come at her. “I do love her,” Grey told Nick. “I do not like her very much right now, but I do love her.” Just then, Jordan reported that the brain-dead patient had taken a turn… not for the better, exactly, but it looked like the procedure might have worked after all. Nearby, Maggie was able to assure Bailey that she hadn’t had another cardiac event. But she was headed for one if she kept going full-steam the way she was. Along the way, Bailey accidentally let slip that Mer was possibly moving to Minnesota. Outside, Link happened upon Amelia and Kai talking, leading to one of the more awkward introductions ever. Thankfully, at that moment, Levi arrived in the ambulance with his mom. Schmitt quickly explained to Webber that his mom had been the one that had put the residency program in danger, then sobbed in his mentor’s arms… as an assessor looked on. 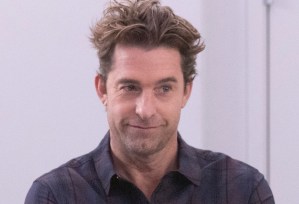 ‘THE SENSE OF FAMILY IS COMPLETELY PALPABLE’ | Finally, Bailey and Richard flashed back to bygone days at Grey Sloan as he met with the accreditation team. At the same time, Levi talked to David. “When I was a resident, I thought saving a life was the highest calling I could aspire to,” said Webber, “then I started teaching.” Schmitt wanted David to know that, no matter what Richard’s tests revealed, he was the best. Even just that day, he’d helped Schmitt save his mother’s life. “I don’t even want to think what could have happened without him.” If the accreditation team wanted Richard to step down to keep the program going, although he didn’t want to, he would. With that, Richard went and finished David and Kai’s tests — nailing them. Amelia then happily reported that Mama Schmitt was going to make it. “Not everyone gets another chance in the O.R.,” David told Richard. “Take advantage.” Pulling herself together, Bailey offered to show the assessors around some more. However, there was no need. Grey Sloan’s surgical program was one of the best they’d ever seen. But — uh-oh, there was a “but” — the hospital didn’t have enough doctors to maintain a residency program. So it would be put on probation and given a chance to make changes. If Bailey couldn’t do so, and fast, the program would be shut down — on her watch. At least Nick’s transplant had been a success, and he was at last able to let the poor brain-dead guy’s wife say goodbye. “I’m definitely ready to start over,” Mer told Nick. “I’m gonna take that offer.”

What did you think of “Put It to the Test”? Hit the comments with your reviews, questions, critiques.