Soon as it was announced that Dylan McDermott would succeed Julian McMahon as FBI: Most Wanted‘s team leader, those familiar with the Dick Wolf Extended Universe wondered how Law & Order: Organized Crime‘s inaugural villain could navigate such a heel-to-hero transition.

On Law & Order: OC, McDermott played the cunning Richard M. Wheatley, who was in and out of prison for organized crime activity and as a suspect in the murder of no less than lawman Elliot Stabler’s wife, Kathy.

In the next FBI: Most Wanted — airing Tuesday, April 12 (not six weeks after his OC sendoff) and titled “Covenant” — McDermott will make his debut as Remy Scott, the “charming but formidable” (CBS’ words!) Special Agent who takes charge as the feds investigate a series of homicides tied to a forbidden love between a young teen and her older boyfriend. 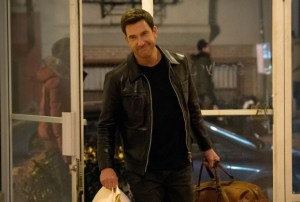 Speaking with TVLine at a Wednesday press event, McDermott acknowledged that the aforementioned transition has been “really an interesting process,” in that “I’ve been reading comments online, people saying, ‘Oh, it’s too soon!’ ‘He’s Richard Wheatley, the bad guy!’ And I relish it, because I think it’s amazing that people actually do believe that I’m him, I’m that character.”

And because of that POV held by some, the TV vet is ready to upend expectations.

Including also in CBS’ Hostages and the big screen’s Olympus Has Fallen (whoops, spoiler alert?), “I know I’ve been playing questionable people,” McDermott noted, “and now it was time to play someone good again — and Remy Scott is that character…. I think you going to quickly forget about Richard Wheatley by the end of [the next FBI: Most Wanted]. You’re going to be like, ‘This is Remy Scott.'” 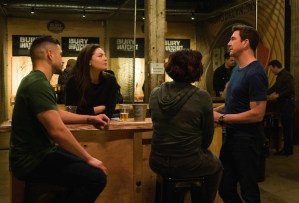 FBI: Most Wanted showrunner David Hudgins added that casting McDermott hot off his Organized Crime spree “was not a concern, because we had an idea of this character conceptually early on, and when Dylan came in, it expanded even further. But the idea was this guy will have some energy and some lightness and some ability to connect with people, which think is one of his biggest assets.”

The EP then added, “I agree with Dylan. By the time you see him in this episode, you’re not going to be thinking about Richard Wheatley — which, by the way, was a f–king great character.”

Want scoop on an FBI series, or for any other show? Email InsideLine@tvline.com and your question may be answered via Matt’s Inside Line.