Read on for the highlights of “Give Me Liberty.”

GONE-Y PRINCE CHARLIE | In a flashback to Scotland in June, 1746, two women and a man walk along a beach. Oh wait: It’s actually a woman, a man and Prince Charles dressed as a lady. He’s in hiding as he attempts to escape Scotland after the failed Jacobite uprising at Culloden, and even though he’s lucky just to be alive, he’s kvetching about bonnets and skirts and such. The woman with him — whom we’ll learn is Flora MacDonald — tells him to hush up, because there are some Redcoats between them and the boat that will carry the prince to safety.

While the prince stays mum (though not before squeaking out a “mark me,” to my utter delight), Flora sweet-talks their way past the British soldiers. And just like that, they evade immediate capture. 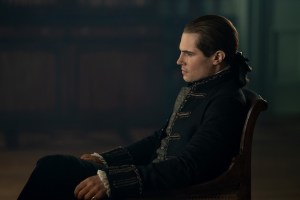 Meanwhile, in the present day, Gov. Martin is dismayed to receive Jamie’s notice that he will, for reason of “personal convictions,” no longer be an Indian Agent for the Crown. “Is it a letter of resignation or revolt?” Martin asks the man sitting across from him in his office, and when the camera moves over to him, we see it’s Lord John Grey! Jamie “is a friend of yours, is he not?” the governor asks. “One of my dearest,” Grey replies, doing ye olde impression of the heart-eyes emoji. Lord John reassures the governor that Fraser is loyal to England, no worries, all good. Still, Martin sends him to an upcoming event to suss out Big Red’s true affiliation. Twist Grey’s arm!

STEPHEN BONNET RETURNS (IN A SENSE) | That event is a party in Wilmington, N.C., thrown by Jamie’s aunt Jocasta in honor of Flora MacDonald, who has relocated to the colonies in the intervening years. Flora is going to speak on behalf of staying loyal to Great Britain; like Jocasta, she sees the failed Jacobite rebellion as a cautionary tale now and is advocating for keeping the peace.

Jamie and Claire plan to attend, as well. Jamie acknowledges that he’d likely agree with his aunt if he didn’t know, thanks to Claire and Brianna, how things were going to play out. And on that note: While he’s in Wilmington, he hopes to connect with the Sons of Liberty. That meetup goes well, and once his connection realizes that Jamie is a Mason like he is, he invites him to a formal SOL meeting the next evening. And in a cheeky tag to the scene, Jamie notices that the tavern he’s in is displaying a glass jar proclaiming it holds “the bollocks of the notorious pirate Stephen Bonnet, taken from his corpse.” 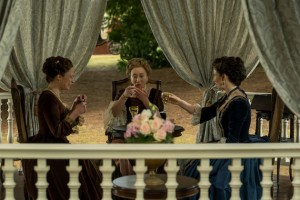 A FETE FOR FLORA | The party happens that evening, and Jamie and Claire get all gussied up and go. Lord John notices them enter, and I wonder how everyone else in the room had any oxygen to breathe, given the giant inhale Grey does when he sets eyes upon Big Red. Jamie is pleasantly surprised to see his old friend, and wonders what he’s doing there. “I have a particular fondness for reformed Jacobites,” John says. (Side note/JAMMF+LJG brain dump: I really do love this fraught friendship, mainly because of all the things that go unsaid between Jamie and John every time they interact. And while David Berry is not at all who I expected the show to cast, based on how John is described in the books, I think he’s so lovely in the part. Plus, I cannot get the thought of the letters out of my head.)

As John proudly reports on William’s schooling and general interests, you can tell it kills Jamie a little, but he merely smiles. And then Jocasta arrives. Jamie nips over to say hello/softly chastise his aunt for buying Fergus a print shop in New Bern, but she counters that it will make him happy, and Fergus’ happiness has been in short supply lately. Then Jamie and Claire say hello to Flora, whom Jamie met when they were both children, but the interaction is cut short when Jocasta’s eyes start to hurt her a lot. Claire says she has something that can help, and Flora joins them for a brief respite outside.

While the three women take a breather, Claire gives Jocasta a pipe full of hemp flower to help combat her glaucoma pain. (Side note: I’m not sad about this departure from the book; in the novel, Claire stabs a needle into the white part of Jamie’s aunt’s eye to relieve the pressure or something, and while helpful, it’s gross.) While Jocasta smokes the wacky tobaccy, the ladies talk about how royal men are, after all, just men — and that causes Claire to flash back to when King Louis XV of France forced her to sleep with him in exchange for Jamie’s freedom. Pretty soon after, she hangs back while the women return to the party, and she huffs a little of her travel-sized ether to take the edge off.

COLONIALS BEFORE BROS | Much later, Jamie and Lord John go for a walk. John says he saw a list of suspected rebels, “and yours was among them… you must disassociate yourself from them at once.” Jamie starts to come clean to his friend, but then Jocasta’s slave, Mary, runs over to tell them there’s trouble in town. So Jamie and John rush to the Wilmington print shop, where an angry group of rebels is threatening the printer with tar and feathering (and worse). It’s all because he printed fliers about Flora’s visit, commissioned by Jocasta.

Though someone in the mob does (non-fatally) shoot the printer, and Jamie gets a little scalding tar on his neck, Jamie and Lord John get the group to move on, with Jamie arguing that free speech must prevail and that the printer is allowed to print whatever he wants. Claire cleans him up later, and they agree that their new allegiance is to their new nation. And when Jamie sees Jocasta, he warns her that she’d better not use her influence with Fergus to have him print things that will get him and his family killed. “I understand your grief,” he says, a nod to Murtagh (sniff!), but if anything should happen to my son…,” Jamie says, his voice catching a little. When Jocasta peaces out to lie down, Mary tells Jamie that the older woman hasn’t been herself since Murtagh passed, and that she has dreams about “money stained by blood, her daughter Morna and French gold.” 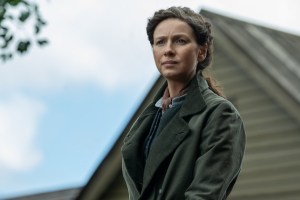 FAREWELL FOR NOW | Jamie has to tell John the truth, so he seeks him out — and Grey excitedly reveals that he knows where the Sons of Liberty will meet that evening. Jamie lets him know that he’s going, not to infiltrate but to join up. “I am a fool,” Grey says, his face ashen. “John, no,” Jamie whispers. Things get very intense as they argue. “If there is a war, the rebels will lose. And you,” John says, maybe a little near tears, “may lose your life.” Jamie asks his friend to come with him, just to hear the other side. He won’t, but he does agree to delay his men for as long as he can. Then he bids Jamie be careful, and they part. THE LOOK JOHN GIVES HIM, MY HEART.

But the Sons of Liberty want nothing to do with Jamie when he shows up; one of them saw him defending the printer the day before, and they think him a Loyalist. He buys back some of their trust, though, when he alerts them to the fact that soldiers are on their way, and the SOL are able to clear out before the Redcoats arrive.

The next morning, Claire and Jamie prepare to return to Fraser’s Ridge. She thinks she hears someone in town whistling “Colonel Bogey March,” which wasn’t written until 1914. But then the whistling dies down, and she chalks it up to the wind playing tricks on her. BUT… in the Wilmington jail, we see a long-haired prisoner holding a small emerald and whistling the same tune. And though the episode cuts to black before we see his face, there’s a very good chance it’s Wendigo Donner, the time-traveler Claire met when she was kidnapped and raped by Lionel Brown and his men in the Season 5 finale. 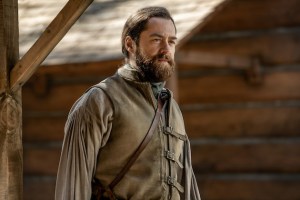 AND BABY MAKES 4 | Back at the Ridge: Amy McCallum is getting a little too used to having Roger’s help around the house, and people are talking. It’s so much the topic of local gossip that, when Roger catches Malva and one of the Henderson boys having sex in the meetinghouse, she warns Roger that if he tells her father, she’ll say she saw him and Amy kissing — and that everyone will believe her. Roger must realize that’s true, because he keeps mum while she sneaks out the back door. Eventually, he pulls away from the McCallums and tells Brianna that it felt good to be needed. And when she counters that she and Jem need him, he says (correctly) that they don’t — she’s a damn engineer who’s thisclose to bringing running water to the Ridge. But they end the episode in a good, happy place, especially after Bree announces that she’s pregnant with their second child!

Oh, and this is worrying: After Bree, Marsali, Malva and Lizzie find evidence of someone performing a love spell in the woods, Malva sneaks off to a cabin where a man’s dead body is in a state of advanced putrefaction. That doesn’t seem to bother her much, though, as she takes out a knife and clips off one of his fingers (!) — an essential element to the spell, as Marsali pointed out earlier.