Grey’s Anatomy cut straight to the heart, so to speak, in Thursday’s episode. Not only did Maggie propose splitting a 13-year-old patient’s ticker in two, but Meredith revealed to Zola that if she accepted the job offer she’d received, it would mean moving to Minnesota, and Bailey tried to deal with the fact that, in light of the physician shortage, “no” was often the answer to the question “Is there a doctor in the house?” And if you read on, we’ll go over all the developments in these stories and more. 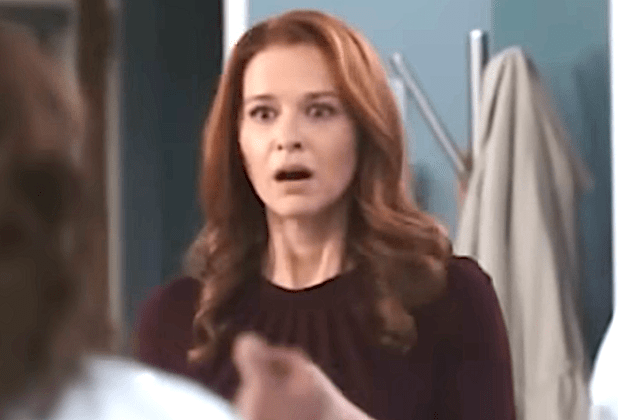 ‘HE PROMISED YOU WOULDN’T GET ME FIRED’ | As “Road Trippin’” began, Maggie and Winston presented to Team Grey Sloan about Fierce Fernanda, a 13-year-old who was about to undergo the very rare Ross Procedure. The youngster was about to arrive in Seattle by RV. The only question was, who would be scrubbing in with the marrieds? Nearby, Amelia refused to allow Owen to return to work for two more weeks. And at Mer’s house, she and Zola, both suffering from colds, were spending the day in. “You sound gross,” said Bailey when she called. And Richard didn’t want to fill in until he’d been assessed. “You are fine,” Miranda assured him. “We all have good days, bad days… ” He couldn’t tap out during a physician shortage! Watch me, he all but said. After being chosen to scrub in with Maggie and Winston, Helm was beside herself. But the couple soon had a failed aortic dissection to deal with. Ack! It wasn’t that at all! It turned out to be Winston’s prankster brother, Wendell (Rome Flynn, whom you surely recognized from How to Get Away With Murder). Soon, tensions rose as Winston noted that Wendell hadn’t even RSVP’d to his and Maggie’s wedding. Wendell had good news, though: He was now a pharmaceutical rep. And he could keep himself busy while the newlyweds treated Fierce Fernanda. 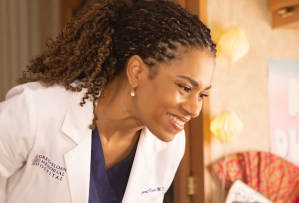 When the RV arrived, Fernanda was already in trouble. Like, so much that she immediately passed out. As the family blamed themselves for letting Fernanda and her brother stop to sight-see, Dad experienced troubling back pain. Gee, when it rains, it pours! Soon, Maggie and Winston discovered that Fernanda’s delayed arrival had left her condition critical. He advised that they change course but would support whatever his wife decided. Which was… a variation of the Ross Procedure involving cutting the girl’s heart in half. “She could go into complete heart block,” Maggie admitted. But she hoped that Fernanda’s parents would continue to trust her. It was, the doc said, the best option to replace her valve. Outside, Winston tried to calm Fernanda’s brother, who confessed that their family was falling apart trying to take care of her. It felt like they were being punished for taking a couple of days to try to be a normal family. So if she didn’t make it, neither would they. Before surgery, Maggie assured Winston that as terrifying as the operation was, she could handle it. But she needed him in there with her. Did she need to call Teddy instead? In response, he opened up about his father and the way his mother had used the money for her cancer treatment to bail him out when his drinking landed him behind bars. That had started Winston having panic attacks, and that day, it had left him scared that Wendell was going to begin the pattern all over again. “We have a whole family to save,” he said. And they would, because his wife is a genius. 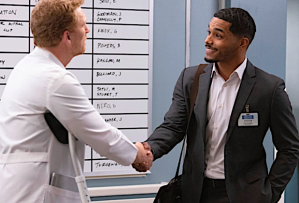 ‘SHE THINKS O.R. 2 HAS A BUZZING SOUND, BUT IT DOESN’T’ | When Owen noticed how shorthanded Bailey was, he offered to pitch in and be her substitute chief for the day to allow her to scrub in. And he seemed to thrive in the role — though he did have to remind Helm that he’d been chief of surgery for five years. Hearing this, Wendell pounced, pitching the idea of sending defibrillators in drones ahead of ambulances. He even charmed Amelia, having read about her work. “You should come to dinner,” she told him. Privately, Wendell defended himself to Winston — he was just doing his job. “Some of these people are my bosses,” Winston noted. How did he think Wendell had gotten the job? He’d used Winston’s name, even Richard’s, even though he’d never met him. Their father had told Wendell not to come, he said. “Guess Dad was right.” Snap. Shortly, Owen was called on the carpet for complaints that had been lodged against Grey Sloan’s residency program. And why was the rep even talking to him instead of Bailey or Richard? Suddenly, his fun day was a whole lot less fun. No wonder the job brought Bailey so little joy!

‘YOU DO REALIZE THAT I’M NOT LESS PREGNANT THAN THE LAST TIME WE TRIED THIS SURGERY’ | With Maggie busy with Fernanda, Teddy took over on Laura’s case with Jo… just as Todd brought his crush a giant fruit basket. Um, it was actually for his sister. Except that she couldn’t eat before surgery. In that case, sure, it was for Jo. That’s the ticket! As Teddy observed, amused, Jo turned down Todd’s request for a date. Off that, she assured Altman that it was over with Link. Wait, “you slept with Link?!?” Teddy blurted out. She didn’t remember s–t from their day-drinking session. “Did I tell you anything at the bar?” Teddy asked. Later, Jo shared with Laura that she was studying for a major exam — in other words, if there was one person in the world who could help, it was her. 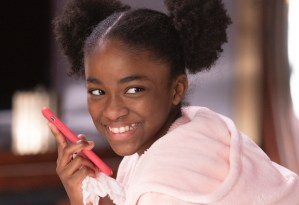 ‘WELCOME BACK, FIERCE FERNANDA’ | As the hour neared its conclusion, Maggie and Winston threw their Hail Mary to save Fernanda — and pulled it off. “It worked,” Pierce happily reported to the tearful family. “So far, so good.” Elsewhere in the hospital, Todd brought Jo flowers and study snacks — no fruit, though, because “I thought I overfruited earlier.” Somehow, he managed to leave the room without kissing her because people come to libraries to study, not neck. (Since when?!?)  Back at Mer’s, she and Zola huddled up under blankets. “Is it weird that I wish we got sick together more?” asked Zola. “Yes, but I was thinking the same thing,” Grey admitted. Zola noticed that her mom was ignoring David’s calls and not answering Nick’s texts. So Mer admitted that she’d been offered a job in Minnesota, one that would mean relocating. “Would the job save a lot of lives?” asked Zola. “Maybe,” Mom said. And if it meant that she’d see more of Nick and that would make her happy, Zola said that she’d follow Mer anywhere. Finally, Winston admitted to Wendell that he blamed his brother for their mom’s death. “I know that’s not fair,” he added. “Her cancer, it took us both out… and she would be so angry if she knew that we let it take us away from each other.” With that, Winston admitted that he missed Wendell and even offered to introduce him to some people at the hospital. When Bailey returned to her office at day’s end, her mood light, Owen soured it by filling her in that the residency program was… ack! In danger of being shut down!

So, what did you think of “Road Trippin'”? Hit the comments with your reviews, comments, questions — the works.