Television has given a platform to a great number of lunar-related heroes through the ages, from Neil Armstrong to Sailor Moon. Thanks to Marvel and Disney+, we can now add one more name to that celebrated (albeit extremely specific) list.

Marvel's Moon Knight: Everything to Know 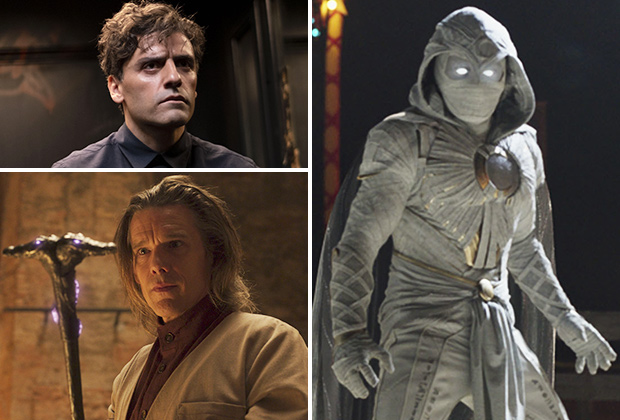 Enter Marvel’s highly anticipated (and well-reviewed!) new series Moon Knight, easily the most refreshing departure from anything we’ve seen in the Marvel Cinematic Universe since WandaVision. In fact, as director and executive producer Mohamed Diab recently told TVLine, “A lot of people are telling me that if there was no MCU logo at the beginning of Episode 1, no one would know that it was a Marvel project.”

The show’s six-episode first season, which serves as the titular hero’s origin story ahead of his inevitable leap to the big screen, finally premiered on Wednesday — and we have much to discuss.

When it comes to unlikely heroes, you couldn’t ask for one better than Steven Grant (Oscar Isaac), whose life pretty much sucks no matter how you look at it. He’s totally overqualified for his job at the museum gift shop, his boss seems to have absolutely no respect for him and, to quote an old church hymn, his love life’s DOA. Even when Steven does manage to score a date with his work crush, he totally blanks and shows up to the restaurant two days late.

To be fair, most if not all of Steven’s many misfortunes can be attributed to what he believes is merely an aggressive sleeping disorder. If only it were that simple. He knows that he sleepwalks — hence his nightly ritual of tying himself to the bed (which shouldn’t be hot, but come on, it’s still Oscar Isaac) — and he’s terrified of what Sleepy Steven may be getting up to.

Desperate to regain control of his life, Steven decides to forgo sleeping altogether, an ill-advised plan that only further loosens his grip on reality. So when he suddenly wakes up in the middle of a field with a wonky jaw that he cracks back into place, he’s pretty sure he’s losing his mind. And when he starts to hear voices (“You’re not supposed to be here! Surrender the body to Marc!”), he knows that it’s going, going, gone. 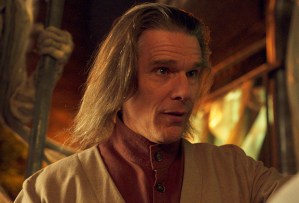 While wandering aimlessly around his new surroundings, Steven encounters Arthur Harrow (Ethan Hawke), a “religious” leader with some twisted tricks hidden up his decorative sleeve. And despite being the show’s obvious Big Bad, we can’t entirely fault people for following the guy. First and foremost, we can appreciate a group costume from time to time. And Arthur’s belief that he’s “here to make Earth as much like Heaven as possible” sounds pretty good on paper. Plus, you know, he’s Ethan Hawke.

Here’s the thing, though: Arthur answers to the sleeping Egyptian goddess Ammit, and she’s… a lot. Just a real handful. She believes in holding people accountable for their future misdeeds, in addition to those they’ve already committed. So when one of Arthur’s followers tests positive for shenanigans, poof! It’s instant curtains.

Arthur recognizes Steven as a mercenary named Marc, but Isaac’s befuddled character insists that he is, in fact, a mild-mannered British gift-shop salesman. (Pip pip, cheerio, and all that.) Arthur isn’t convinced, so he persists, demanding that Steven hand over the golden scarab in his possession. But the voices in Steven’s head aren’t about to let that happen, so after what feels like a split-second blackout, Steven finds himself surrounded by Arthur’s soldiers. And they’re all dead. [Extreme Steve Urkel voice: Did I do that?]

From this point on, it’s absolute chaos. Wham!’s “Wake Me Up Before You Go-Go” plays as Steven steals an ice cream truck to escape more of Arthur’s goons, during which he occasionally blacks out and kills more people. There’s even a full-on Final Destination moment with an out-of-control log truck. It’s a wild sequence… and Steven is relieved when he wakes up to discover that it was all a dream. Except, you know, it wasn’t. 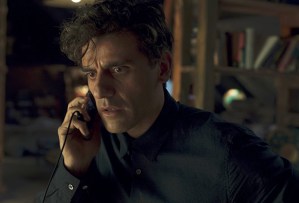 This soon becomes clear when Steven discovers a burner phone and a key hidden in his apartment. Along with one missed call from someone named “Duchamp” (a pivotal and extremely French character in the Moon Knight comics!), the phone is drowning in calls from a “Layla.” His exchange with her is brief, mostly consisting of her asking questions like “Why are you calling yourself Steven?” and “Why are you speaking in a British accent?” She’s also on the whole Marc train, apparently.

At this point, Steven (or is it Marc?!) is understandably freaking the eff out. And you know what’s not helping? The flickering lights in his apartment, along with the voice in his head telling him to “stop looking.” The cherry atop this holy-crap sundae is the arrival of a horrifying skeletal creature — later to be known as Khonshu, the Egyptian god of the moon, voiced by F. Murray Abraham. With one touch of its gross hand, Steven suddenly finds himself… on a bus… with Arthur! (The guy’s a little extreme, but to give credit where it’s due, at least Arthur takes public transportation. He cares.)

Arthur follows Steven back to the museum, where things quickly go from bad to worse to bats–t crazy. First of all, Ronnie the security guard? Absolutely no help at all. The guy turns out to be one of Arthur’s followers, praising Ammit while he guides his leader straight to Steven. Arthur tries to explain that Ammit isn’t to be feared. In fact, she was the one betrayed by her fellow gods, and even by her own avatar. (Definition time! An “avatar” is a human chosen to channel a particular god. But in true Steven fashion, he first assumes that Arthur must either talking about James Cameron’s Avatar movies or the Nickelodeon series Avatar: The Last Airbender. We must protect Steven at all costs.)

Arthur manages to sneak in a quick test of Steven’s soul, but the results are… let’s say, inconclusive. “There’s chaos in you,” Arthur warns him. (Duh, guy! Have you not been watching this entire episode?) But before Steven is able to even begin to process that ominous warning, he’s chased down by what is scientifically referred to as a gnarly-ass beast.

Is this the end of our hero?! Or will Steven listen to the voice in his head, urging him to surrender his meat sack to Marc? Find out next week — same moon time, same moon channel.

OK, let’s talk: Now that you’ve seen the premiere, was Moon Knight everything the Internet has been screaming that it would be? Weigh in via our polls below, then drop a comment with your full review.

Want scoop on Moon Knight, or for any other show? Email InsideLine@tvline.com and your question may be answered via Matt’s Inside Line.