Sometimes a lack of expectations can be a good thing.

Disney+’s Moon Knight is the streamer’s first live-action Marvel series to not spin off a character and actor already established by the blockbuster MCUfranchise. In addition to that, Moon Knight in his own right is not quite “obscure,” but certainly less well known than the Marvel characters who thus far have merited their own Disney+ showcase.

But it is that low-key profile, coupled with the main character’s rather complicated issues (Marc Spector struggles with dissociative identity disorder, aka DID), that sets the stage for Moon Knight to subvert and perhaps wildly exceed any tempered expectations you have — and that, I am delighted to report, it absolutely does.

Under Jeremy Slater (The Umbrella Academy) as head writer and premiering Wednesday, March 30, Moon Knight stars Oscar Isaac (Star Wars Episodes VII through IX) as Steven Grant, a nebbishy museum gift shop employee who is prone to blackouts/lost time; as such, he does his best to cuff himself to bed each night. We very soon realize that this sad sack lives with DID, and the host personality belongs to an infamous mercenary named Marc Spector.

Complicating Steven’s life even further is that fact that his alter is the latest vessel for — stick with me here — Khonshu, an Egyptian god who forces Marc to atone for his killy past by avenging the innocent. Ergo the wild, nocturnal outings of which Steven has barely any awareness.

On the flip side… Ethan Hawke’s Arthur Harrow, who has big CLE (cult leader energy), does the bidding of the Egyptian god Ammit, by more proactively heading people’s bad deeds off at the pass. He does so via a simple ritual in which he holds a stranger’s hands and lets an animated “scales of justice” tattoo on his forearm judge them on the spot.

Not everyone who meets Harrow walks away alive.

Rounding out the series’ rather compact cast is May Calamawy (Ramy) as Layla El-Faouly, a woman who is in alliance with Marc and thus cannot fathom why Steven “plays dumb” with her when their paths cross, and the late Gaspard Ulliel (Twice Upon a Time) as enigmatic antiquities collector Anton Mogart. 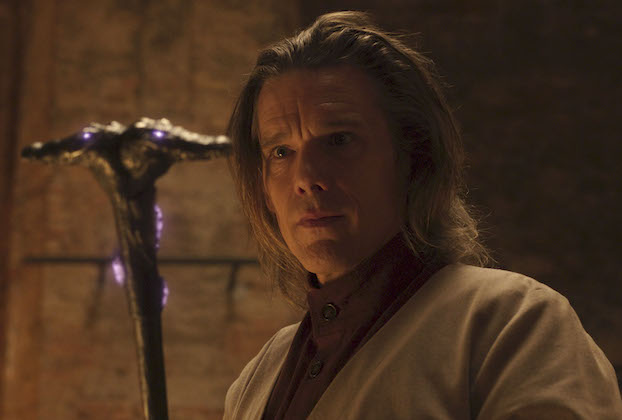 None of the above is a spoiler, and most of it is covered in the six-episode series’ opening acts. (TVLine binged the four episodes made available to critics.) And while it definitely will benefit your viewing experience to have these broad strokes in front of your eyeballs now, the fact is that Moon Knight remains wonderfully unpredictable every step of the way.

You knew that Falcon and Winter Soldier was about Sam Wilson accepting his new legacy. You knew that Hawkeye was about Clint Barton tending to some unfinished business and getting home in time for Christmas.

You do not know where Moon Knight will take you. And I promise you that if you form any back-of-napkin theory, the end of the fourth episode will blow it up in spectacular fashion. 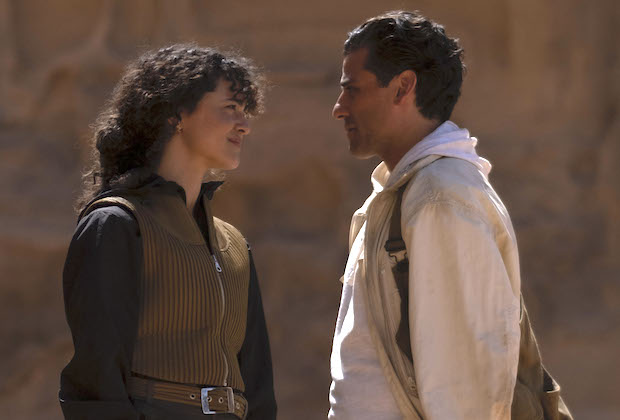 The joy in watching Moon Knight actually comes from what a few have opined are its liabilities — it has no connection to existing MCU fare and thus is not beholden to scattering Easter eggs or checking off boxes (though one familiar geographic location is name-dropped). That frees the viewer up to experience Moon Knight for what it is, a rollicking yarn that is one part Venom (as voiced by F. Murray Abraham, Khonshu is a bit of a dick!), one part Split, two parts Indiana Jones and… at least one other part.

Visually, the early episodes wind us through London — ergo Isaac’s accent for Steven, which has invited derision but helpfully flags which alter is speaking at any given moment — and other distinct locales, allowing for set pieces unlike anything else in Disney+’s TV MCU. The visual effects are in steady supply but always feel organic versus churned from the keyboard of a PC, including when Moon Knight elects to “suit up,” the clever ways Steven and Marc converse through reflective surfaces, or when Harrow summons very bad things.

Marvel chief Kevin Feige has attested that Moon Knight is “loud and brutal” and as such marks a “tonal shift” for the MCU fare being produced for Disney+. And while, yes, the character does, to cite one example, ruthlessly whale on a bevy of goons who get sicced on him at one point, the violence is not gore-based but simply stone-cold, efficient kills.

Oscar Isaac is doing yeoman’s work here; the first episode alone is one mother of a roller coaster for his character, and he frankly makes us worried for Steven’s marbles. Hawke, speaking softly and rocking scraggly hair, keeps you guessing about Harrow’s next move. Calamawy, from go, slips nicely into adventure hero mode and is pulled into her own brawls along the way, while Ulliel has a striking presence that serves his character well.

THE TVLINE BOTTOM LINE: And now for something completely different… Moon Knight arrives just in time to shake up the Disney+/Marvel formula.