This Is Us does love its fake-outs — remember when we all thought the series premiere storylines all were taking place in the present day? — but there’s a chance that this week’s episode clues us in to Randall’s ultimate, Oval Office aspirations.

“Every Version of You,” which comes after Kevin and Kate’s portions of this season’s Big 3 Trilogy, focuses on Randall as he and Rebecca take a short road trip to Boston, for reasons we’ll get into in a moment. The brief and unexpected bit of travel allows for a little reminiscing and a lot of emotional processing, both about Rebecca’s post-Thanksgiving pronouncement and her advancing Alzheimer’s Disease. In the process, we learn that there’s a “strategy” afoot in Randall’s professional life that just might bring him to Washington, D.C., in the not-too-distant future.

Read on for the highlights of Episode 10.

A LONG POOL DAY COMES TO A CLOSE | In the flash-way-back, Kevin is near-drowning and Kate is balking at being in the water, but little Randall proudly marches down to the deep end to take his swim test. Of COURSE he aces it, and of COURSE no one in his family really pays attention to the accomplishment. But by being silly with Kevin, Randall gets his brother into the pool (in the shallow end)… and Kate and Jack follow… and by the end of the episode, all of the Pearsons are splashing and frolicking. The takeaway: Rebecca really wanted her whole family to swim together, and Randall made it happen, because he lives to make Rebecca happy. This will become a recurring theme throughout the hour.

RANDALL SAVES THE DAY! | In the flashback to when Randall, Kate and Kevin were stuck at the community pool after hours, the brothers are trying to coax a reluctant Kate over the fence when a police car pulls up and demands to know what they’re doing. Kate and Kevin freak that they’ll be arrested for illegal trespassing and underage drinking, but Randall calmly approaches the car and asks to speak to the officer. A few minutes later, he lets the trio go free with a warning.

Kate suggests that they go to the (closed for the evening) diner where she works and have a cup of coffee, taking advantage of the fact that she’s got the keys to the place. So they do, but Randall makes sure to give Rebecca a call to let her know that they’re OK and will be home later. While they talk, he comforts her about Miguel, and cheers her up by directing her to his backpack, where he’s stashed a few smiley face cookies like the ones she and he used to enjoy when he was a little boy. “Thank you,” she says, touched. “I needed this.”

Back in the booth, Kev and Kate press Randall about what he said to get them out of trouble. All he does is chuckle and say that the cop was a reasonable guy. But in a flashback, we see Randall’s quiet yet impassioned plea that the family is at a breaking point, and a trio of arrests will hurt the Pearsons in a way from which they might not be able to recover. “There’s a very real chance we won’t make it,” Randall says, which wins over the officer. When it’s clear that they’re out of the danger zone, Randall even goes so far as to joke, “Oh, and I may end up being president one day, so I really can’t get arrested.”

Or is it a joke? Keep reading, then we’ll discuss.

ROAD TRIP! | In the present, Randall is reeling from Rebecca’s announcement that Kate will be her healthcare proxy. As Beth helps him process it, Déja comes downstairs, irate: Malik broke up with her, and she’s blaming Randall for telling him to do so. “I literally hate you,” she spits. Their argument goes off the rails really quickly, thanks to Randall’s already-rough emotional state; at one point, he says that she’s his daughter, and she replies, “No, I’m not. Tess and Annie are your daughters. I’m just some girl you took from her mom.” OUCH. The next morning, Déja is gone.

Tess eventually confesses that her sister left the night before and is headed to Massachusetts to convince Malik that they should get back together. Randall grabs his bag and heads for the car, planning to chase after her, but Rebecca advises him to take a breath. “Or maybe we should just let Kate handle it, because she handles all the big stuff now?” he snaps. The outburst seems to cement something for Rebecca, and she announces that she’s coming with him.

On the drive, they talk about first love, and things ease a bit between them. But when she brings up his comment about Kate, Randall quickly shuts down the discussion, saying his vitriol was just a stupid joke. Rebecca knows better, but doesn’t press. Instead, she asks to stop for lunch so she can eat before taking her meds. 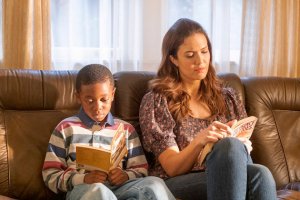 Even though the circumstances are less than ideal, Rebecca really seems to enjoy spending the time with her son; she keeps flashing back to when he was very little, and they had a bunch of shared interests that Kate, Kev and Jack didn’t. When Beth calls and says she’s heard from Déja, who made it safely to Cambridge, Rebecca asks Randall if maybe they can give the teen a little space and not immediately rush to get her. He grudgingly agrees, and they spend the intervening time having a drink at a nearby bar and then spending the night at a motel.

REBECCA EXPLAINS HER CHOICE | During their extended hangout, Rebecca reveals that she’s carrying around a clipping of a “Five Facts About Randall Pearson” article that ran in some publication. Later that evening, after Randall yet again pushes back a meeting with the senator who’s been trying to get in touch with him for a few episodes, Rebecca asks him what’s up. He tells her that the article in her purse is “part of a bigger strategy,” and that he’s been getting calls from the Democratic National Committee about his interest in possibly running as a replacement for the politician in question. “Oh my God, Randall, you are going to be a senator?!” she cries, but he tamps down her excitement: With “so much uncertainty in the family,” he doesn’t know if it’s smart to make a major life decision. 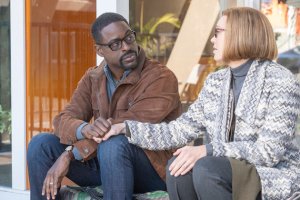 The next morning, as they leave, Rebecca asks him to sit with her by the motel’s closed-for-the-season pool. She recognizes that her disease has taken its toll on him “especially,” and apologizes for relying on him too much after jack died. “And that is why I couldn’t make you the executor, because you and I both know you would move heaven and Earth to see me get better, and you would stop your entire life for me,” she says. “And I can’t let you do that, not anymore.” They’re both starting to cry, and the scene only gets soggier from here.

Once they’ve both recovered a little, he acknowledges the cockiness of his thinking, but “If I do this thing, I’ll win, Mom. If I run, I’ll win. And if I win, I can’t even imagine where this thing will end.” She smiles at him, saying: “I can. I can see it very clearly.”

Does this mean that Randall is headed to the highest office in the land? He’s not president/hasn’t been president in the flash-forward to Rebecca’s deathbed; otherwise, there’d be Secret Service agents in his periphery, right? Or are they there and we just haven’t seen them? Please fill the comments with your thoughts on whether this is foreshadowing or just Dan Fogelman messing with us.

WHERE WE WIND UP | Randall and Rebecca drive to Massachusetts and pick up Déja, who is devastated. Malik isn’t doing much better. Randall softens toward the young man, telling him, “You know, these things have a way of coming back around, Malik, if they’re meant to be… sometimes the door reopens.” Malik thanks him for being a mentor, and they shake hands, with Randall telling him “You’re a very good kid.” He IS! Aw, sad Malik.

In the car, Déja apologizes for her mean words at the cabin. “I don’t want to have a whole talk about it right now, but you’re my dad,” she says softly. “You’re the only one I ever had.”

Before Rebecca and Miguel head back, she has Randall autograph the article, which eventually winds up in a box marked “Randall” in Rebecca’s home. Then, in snippets from all of the storylines, we see: Randall tell Jae-Won to go ahead and set up a meeting with the senator; Kevin bring the twins back to Madison’s place; and Kate tell Toby that she’s not ready to move to San Francisco, “not with where we are right now.”

Now it’s your turn. Hit the comments with all of your thoughts!

Want scoop on This Is Us, or for any other show? Email InsideLine@tvline.com and your question may be answered via Matt’s Inside Line.