In this Sunday’s episode (CBS, 10/9c), titled “Donor,” when hospital employees are targeted by a gunman, the S.W.A.T. team races to find a grieving father causing the terror. Elsewhere, Hondo searches for evidence to prove his theory of the culprit behind a rise in Los Angeles stash houses.

TVLine spoke with Esco about helming Episode No. 99, and how her avid interest music led to something she feels is “definitely different” for the cop show.

TVLINE | It’s been some years since you directed the 2014 indie Free the Nipple. What gave you the nudge to tackle a primetime procedural?
Well, for five seasons I’ve been asking! [Laughs] I told them I really want to do this, and they finally let me do it — and I was so excited to take on this new role. I love to have fun on set, so I knew that I needed to do a lot of preparation to do just that, especially on a show like this where we do 47 pages and shoot in eight-and-a-half, 10- to 11-hour days, and we have four cameras rolling at all times, sometimes five… It was a lot of responsibility, but with preparation I was able to have fun — and I did. I love collaborating, and that’s why I love directing.

TVLINE | What is this episode about?
This episode is about a father who has lost his wife and his son to organ transplants that have not gone right or had been denied…. He has gone insane in a way, and now he’s trying to get justice. This correlates very much with what’s happening in our country, where people are being denied an organ transplant at the last minute because insurance doesn’t cover it or because they don’t qualify…. It’s a very sad reality, and I love that Ryan Keleher, who wrote the episode, highlighted that. 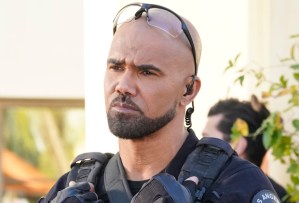 Hondo, meanwhile, has been trying to go after this guy [Hank] “Saint” [St. John], but nothing’s been sticking. It’s a lot of disappointment for him, even though he knows this guy is playing chess with him.

TVLINE | What was the biggest challenge that this script presented for you as a director?
The biggest challenge was making sure that I was able to bring in stuff that was not on the page, and bring an emotionality to the action and the violence. There’s a lot of action, but I tried to bring a lot of heart into it, a lot of feelings towards the so-called “bad” character of this episode. I wanted to bring compassion to him. I tried to find ways to have people empathize with this man who has lost so much.

TVLINE | Being so tuned into music, did you get to do any sort of needle drops, or just go with the show’s typical score?
I’m very, very obsessed with music and soundtracks, so for two months I was talking to Rob Duncan, our composer, saying that I know there is a formula to S.W.A.T., but I want to bring in cellos — there are really dark cellos amid the violence — and I wanted to bring in a bit of the choir, so you can just barely hear it. I wanted to bring that sound to it, to drive up the stakes.

Also, there’s no helicopter in the script, but I wanted to bring in a helicopter so I could play with the sound of that in the third and fourth act, as a kind of metaphor for the heartbeat and pulse. I slowed it down 25 percent to this “wump… wump… wump….” you hear throughout, and with the cellos and all of that, it brings a different tone to the action sequences, that I hope everyone likes. We definitely did something different in terms of sound and music. 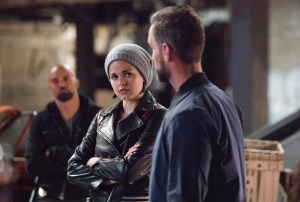 TVLINE | Following your episode, on April 10, is S.W.A.T.’s 100th….
Matt, I can’t believe it. I never in a million years though I was going to be hitting 100 episodes. These five years blasted by fast. The episode I directed was No. 99, so as I was wrapping my episode we were starting to shoot our 100th, and I was already emotional because I had so much fun directing…. It was just a lot. I’ve been really emotional about where we’re at now and opposed to how far we’ve come. It’s all beautiful, actually.

TVLINE | I heard the plot for the 100th episode is pretty intense, with Hondo framed for the murder of two fellow officers.
Yeah, that’s going to be a crazy episode. That’s going to be full-blown action, with every toy you could possibly imagine in terms of action, cameras, drones… everything.

TVLINE | Lastly, I have to ask what is going on with Street and Chris. She stood him up on their recent hamburger date!
Exactly. I think it’s just really hard — you’re not supposed to date somebody on your team, that’s the big thing. Their chemistry and their love is undeniable, but…. Doing what’s right for the team or doing what’s right for them is where it all starts to hang really thin.

Want scoop on S.W.A.T., or for any other show? Email InsideLine@tvline.com and your question may be answered via Matt’s Inside Line.