“Hope springs eternal” was the central thesis for Star Trek: Discovery’s Season 4 finale as our heroic crew persisted with their efforts to save Earth and Ni’Var from total catastrophe.

They faced huge obstacles in Thursday’s episode, including the DMA barreling towards both planets, Tarka in the final stages of his plan to blow up the DMA (which would be disastrous for all involved) and the Ten-C ignoring Burnham’s attempts at contact.

General Ndoye (played by Phumzile Sitole) helmed a shuttle that crashed into Book’s ship, knocking it off course but directly into the path of the hyperfield. Efforts to transport Book to Discovery failed and he was presumed dead, leaving Burnham devastated. But with the DMA still a threat, Burnham pulled herself together and led the crew straight to the Ten-C for one last attempt at diplomacy.

Realizing the destruction and grief they’ve caused with their device, Ten-C agreed to stop using the DMA. However, they did use it one last time to send the Discovery crew home. Plus, we learned that Book — who appeared before them safe and sound  — survived because the Ten-C intercepted his transport. 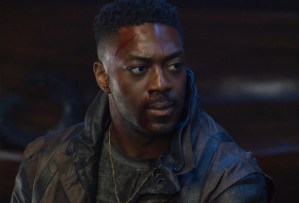 Considering his long list of violations, the Federation sentenced Book to help families displaced by the DMA indefinitely. Although this meant he and Burnham would part ways, the latter was certain she’d see him again someday.

The hour ended on an optimistic note, with a voiceover from Burnham confirming that Ni’Var joined the Federation while Andoria was in talks to do the same. And in a surprising twist, politician and activist Stacey Abrams appeared as the President of United Earth to announce that they’re also ready to rejoin the Federation.

In the conversation below, TVLine spoke with director-producer Olatunde Osunsanmi about how it came together as well as what to expect in Season 5. (The series was renewed back in January.)

TVLINE | How did that cameo from Stacey Abrams come together?
Wilson Cruz has a relationship with her, and he asked [showrunner] Michelle Paradise and [executive producer] Alex Kurtzman if they’d be willing jump on the phone with her. It turned out that she is a legit fan, quoting dialogue from episodes. [They tried to see which part worked for her] and ended up choosing President of Earth.

She came on set and everybody’s head exploded, because 90 percent of the crew didn’t know she was coming. You could just see necks break like, ‘What?! Stacey? What is going on?’ She killed it. She knew her lines, knew the intentions and motivations behind them, delivered them great and understood the blocking that I was trying to do with it. It was really strange to be directing Stacey Abrams, but it was really cool at the same time. Sonequa [Martin-Green]’s head was exploding. She had a good time talking to her between takes and then performing with her on camera. It was really special.

TVLINE | Book and Burnham’s conversation with Ten-C about the destruction they’ve caused with the DMA sounded familiar to conversations we’re currently having about how big corporations are impacting the environment. What was the inspiration behind that dialogue?
Sometimes those corporations do understand the impact they’re having on society and they don’t care, and that’s what was interesting about the Ten-C. What side do they fit on? And if they’re this advanced, how could they not know? It’s comforting to think that not everything is evil. Sometimes there just needs to be diplomacy, and people need to make connection and come to an understanding to stop horrible things from happening.

Connection is something Michelle and Alex love to write, and it’s also a big part of what Star Trek is — diplomacy and understanding each other. The Star Trek themes always seem to be very appropriate for what is happening in real life, whether it be Ukraine or the environment or Black Lives Matter. It always seems to resonate with what’s happening in real time.

TVLINE | Did you always know that you were going to bring Book back? What went into the decision to keep him alive on the show?
When I first read the outline, I was like, ‘What’s going on here? Are we killing Book?’ He survived, thank God. When we got to the script, I knew better call David Ajala and let him know so he doesn’t have total meltdown while he’s reading it [for the first time during the table read.] I never got an opportunity to tell the rest of the cast, and you could just see their heads exploding during the table read.

It was always in the plan to not kill him, to believe he’s dead and then actually have him survive at the end. Earlier in the season, we didn’t quite know how that would occur. [There was a moment in Episode 2 where the audience wasn’t sure Book survived the DMA.]  Michelle asked me not to make that moment too dramatic because she didn’t want anybody to think that he was dead so that it wouldn’t step on what happens in the finale. 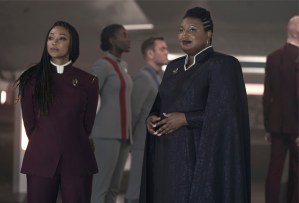 TVLINE | Tilly returned in the finale. Does this mean she’s back with the crew? How does she fit into Season 5?
I think I can say she comes back to play in Season 5. I don’t know if I’m allowed to say how much she comes back to play. She’s a part of Discovery. It would be weird to not have her. I’d like to see more of her than less of her. She’s a wonderful person and one of my favorite characters, so I think we can expect to see more Tilly.

TVLINE | Have you begun planning Season 5?
We have started the very early part of prep. I think it’s going to be an unbelievable adventure. Michelle has more adventure teed up for this season than ever before, but is also looking into the past; just with themes of science and trying to keep it Trek. Because we’re creating cannon, we can do almost anything. The thing that keeps it Trek is its history and what has come before, so it’s always trying to test that out a little bit. Season 5 will probably push that to the extreme.

TVLINE | There’s time travel in other Star Trek shows. Do you think a crossover is possible?
It would be a lot of fun to show up on the Picard set and shoot there with the Discovery crew… A lot of cross-shooting and exchanging occurs between Strange New Worlds and Discovery because we’re a quick car ride away. [They use the same sets.] Usually, our sets don’t appear on the show as the same set because we’ve altered them. But there is a lot of sharing that goes on, and it would be fun to share within the show.

What did you think of Star Trek: Discovery’s Season 4 finale? Grade the episode below and sound off in the comments.