Sam has come a long way since almost turning her boss into a cyclops, back in Single Drunk Female’s first episode. She got sober, got real about why she drank so much, and has spent the past year trying to atone for her reckless behavior.

All of that culminated in Thursday’s season finale with an “alcoholic anxiety dream,” during which she drank shots with her deceased father and mulled over her guilt for leaving him high and dry while he was sick. While not the most pleasant slumber, it suggested that she’s processing more of the grief she’s been holding onto.

With one year of sobriety under her belt, a final check-in with her probation officer Gail (Madison Shepard) revealed more of that lingering anxiety. Although Sam completed all the probation requirements, she was reluctant to part ways with Gail — and went as far as to say she’d miss her. But Gail has joined Carol’s book club on a trial basis — remember when she crashed a meeting in the premiere? — so they may end up seeing each other in a different capacity.

Plus, James has been ghosting Sam before Brit’s wedding. He eventually showed up with a sound explanation for not answering her many texts: He was rear-ended, and it became a whole ordeal. Still, Sam didn’t appreciate being left in the dark.

Meanwhile, Brit was a nervous wreck in her dressing room. She called in Kate, the woman who sold her the stunning white gown she now wore, claiming it did not fit properly. However, Kate knew Brit wanted to blame the dress because she’s scared like “some character in Manifest” and the dress is “the Calling from the universe you can’t ignore. Otherwise, why did you survive? Plane disappeared for five years, and here you are.” Spot on, right? 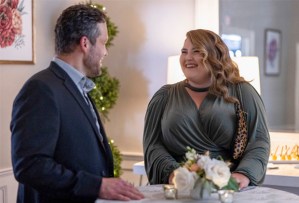 Brit wasn’t the only one grappling with unsure feelings. Felicia was hesitant to attend since Brit’s invite came while they were both tripping on psychedelics. But then Brit’s co-worker Peter revealed that Brit had really nice things to say about her and was trying to set them up, confirming that their bonding was real.

Sam finally visited Brit, who was still freaking out about the impending nuptials and questioning whether she should marry Joel. Seeking her friend’s input, Brit asked Sam if she should go through with the ceremony and admitted she felt lost. Given that Joel is Sam’s ex-boyfriend and they used to be best friends, this was an awkward conversation.

The topic then shifted to their friendship. As Sam tried to comfort Brit, Brit brushed off her efforts, saying, “We don’t really work like this.” Her small jabs at Sam were really a manifestation of the guilt she’d been feeling over a secret involving her friend: She hooked up with Joel when Sam’s father passed away.

Sam rushed out of the room and toward James, telling him she wanted to leave. However, James was acting strangely, and it became clear why. He relapsed, insisting it was only one drink. But as Sam pointed out, “There’s no such thing as ‘one drink’ with us.” James played it off as a small slip-up and tried to get her to “have fun” with him — he even told her he loved her — but Sam saw through it and left. With James starting over on his sober journey, a relationship with him wasn’t possible right now.

Later that evening, and after hours of playing a video game, Sam found Brit at her doorstep asking for help. Through gasping sobs, Brit revealed that she went through with her marriage to Joel. No further words were necessary as the pair sat on the floor in silence and played the game, alluding to a friendship on the mend.

Elsewhere, Felicia was having the time of her life with Peter at Brit’s wedding. Ending scenes found the pair tearing it up on the dance floor to City Girls’ “That’s My B—h.”

What do you all think of Single Drunk Female’s finale? Grade the episode below and let us know your thoughts in the comments.