Staying sober while surrounded by others who drink is no easy feat, and Single Drunk Female’s central character learned that firsthand in Thursday’s double-episode premiere.

The Freeform comedy follows Sam Fink (played by Sofia Black-D’Elia), a twentysomething alcoholic whose embarrassingly public breakdown within the series’ first few minutes marked a new low. She was fired from her job for showing up drunk, was sentenced to rehab and community service after accidentally hitting her former boss in the eye with a phone, and moved back in with her overbearing mother Carol (Ally Sheedy).

After a 30-day stint in rehab, Sam began her sobriety journey with a few setbacks. She was unreceptive to the court-mandated AA meetings and brushed off Olivia’s (Rebecca Henderson) efforts to be her sober coach, thinking she can go at it alone. She got a huge wake-up call after getting drunk with her childhood friend Felicia and crashing her mother’s car into a party bus rented by her childhood friend Brit (Sasha Compère), who’s marrying her ex-boyfriend. 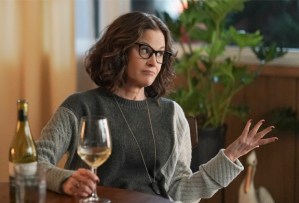 Sam only spent a night in jail, but was also sentenced to 250 hours of community service and required to take driver’s ed classes. One more slip up, though, and she’d be back in the slammer.

Sam’s relationship with her mother, Carol, is especially fraught. At the end of the first episode, Carol offered Sam a glass of wine and got defensive when Sam turned her down, noting that everybody drinks wine at night because “it’s hard to be a person.” In Episode 2, Sam discovered that her mom was seeing a man from her spiritual book club and believed that to be the reason she wanted her to move out.

Carol’s harsh critiques and inability to take Sam’s sobriety more seriously is sure to be a constant source of contention between the pair. During their conversation about drinking, Carol also took offense to Sam calling her alcoholism a disease since Sam’s father died from leukemia.

Still, Sam found a small support system outside of family. That includes Olivia (who’s also a Peabody-winning podcaster), and James, also on his sober journey and the man she hooked up with while wasted last Thanksgiving. Mindy (Jojo Brown), her new boss, agreed to look out for her on Olivia’s behalf and has no qualms about holding Sam accountable for her actions.

Sam is determined to remain on the straight and narrow, but the premiere episodes made it clear that her journey will be filled with plenty of ups and downs. In Episode 2, she called James for moral support after being tempted to drink and learned that sex is off limits for the first year.

She even used her first sober paycheck to begin tackling her $5,000 debt to Brit for crashing into the party bus. After she sent the money, however, she accidentally dropped her phone and shattered the screen.

Sam might be sober, but she’s still a hot mess.

What did you think of Single Drunk Female’s first two episodes? Grade the double-episode premiere below and let us know your thoughts in the comments.