Headed into Thursday’s Grey’s Anatomy, more of Grey Sloan’s doctors seemed to be at crossroads than operating tables. Meredith had to figure out how — and if — she could help Nick through a rough patch with his niece. Amelia and Kai had to decide whether or not to take a leap of faith and plunge heart-first into a relationship. And Maggie… poor Maggie had to ponder whether she could stand to read an entire letter from her late mother being as Ellis as ever Ellis was. How’d it all shake out? Read on; the answers are below… 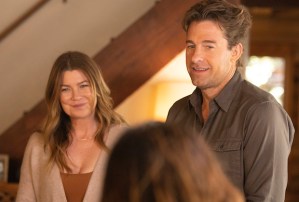 CABIN FEVER | As “The Makings of You” began, Nick ushered Mer to a magnificent “cabin” in Minnesota for a romantic getaway… where, no matter how sparkly his eyes were, she had trouble putting out of her head the report she was writing on David’s groundbreaking surgery. That is, until her beau distracted her with sex just long enough for his niece Charlotte to walk in on them with her “soulmate” Oak Silver. Once Nick and Mer got some clothes on, introductions were made, and Charlotte’s uncle wondered aloud… um, why was she so far from school? Also, why was she with an idiot like Silver, who was into micro-dosing on shrooms to get in touch with his shadow self? Over dinner, he revealed that he and Charlotte were headed to Costa Rica. She was leaving school, she announced. (Crickets.)

Once Nick found his voice, it was loud. Silver did not help. Every syllable out of his mouth just made Nick want to smack him upside the head more. Eventually, everyone went to separate corners — Nick’s involving chopping wood. “If you keep trying to control her,” Mer warned him, “you will lose her.” But she didn’t get it, he said. Owing to Charlotte’s mother, she was predisposed to making terrible decisions. Later, alone with Charlotte, Mer admitted that she reminded her a lot of herself. Charlotte wasn’t rebelling, she assured her uncle’s gf. She just wanted something new — she wasn’t becoming a train wreck like her mother. “Will you talk to him?” Charlotte asked. “You can,” Mer assured her. And with some difficulty, she did. She wanted to figure out some stuff and wanted him to trust in the job that he had done raising her. “And if I do drugs,” she cracked, “they will be plant-based.” (Tension broken.) After Charlotte and Silver left, Nick admitted that he wasn’t used to having help. If he was gonna be with Mer, he’d have to get used to it, she said. And vice versa, he shot back. They both appeared to be considering sorta career changes. She might not be able to go back to Grey Sloan and just be chief of general, she admitted. Not after working on David’s case at the clinic. 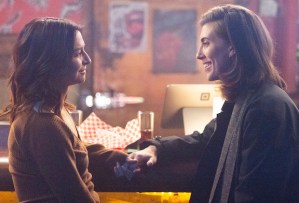 BAR NONE | At Mer’s clinic, Amelia and Kai briefly, lightly clashed over David’s withholding of his underlying condition and what could’ve been done to prevent it. Nonetheless, the spark between them was still burning brightly. After submitting their final report, Kai invited Amelia to a show that night since her flight back to Seattle didn’t leave till morning. Once at the bar, Kai stunned Amelia when it turned out that they were the headliner. And they were pretty rollicking and awesome, too. If I didn’t love them before, I had to after this. So, it seemed, did Amelia, with whom they got extremely hot and heavy post-show in a tangle of sheets. Afterwards, Kai introduced Amelia to their plants and admitted that they loved kids too much to want any. They also talked about playing the rock star on stage and challenged Amelia to see that she, too, was one. Why did she self-deprecate? It’s her shield of armor, she theorized. If she loved every part of her, she’d deserve a love that did the same. 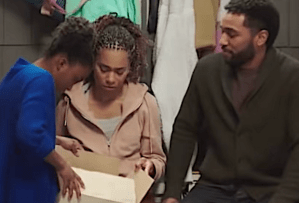 LETTER HAVE IT | Back in Seattle, Maggie was recovering from the flu while babysitting Mer’s kids with Winston. Soon, a game of hide and seek led Zola to discover a box of the late Ellis’ stuff — including a letter for “Margaret.” After Winston shared his grief over mementos lost, Maggie mustered the courage to read her mother’s message, written after she learned that she was dying and had little time left to grapple with her mortality and mistakes. (Hello, Kate Burton!) As Ellis, appearing to Maggie, read her missive aloud, she interacted with her daughter… by the hardest. (Is anything involving Ellis ever easy?) At the same time, Winston bonded with Zola over her fears that she still might one day lose her mom. Later, they got even closer playing Emergency Room and treating Bailey’s cut.

All the while, Maggie pleaded with her vision of her mother to give her answers. Had she gone into cardio because her mother had wanted to? But Ellis was as cutting as a scalpel, damn near equating her daughter with “the inconsequential.” To Maggie’s astonishment, she learned that Ellis had chosen her adoptive parents and declined to receive updates on her. “I’m not a dinner invitation” to be accepted or declined, Maggie said. “That decision not to see you, I do not regret,” Ellis yelled. In fact, she was proud of it. Jeez! “She was exactly how Meredith described her,” Maggie cried to Winston. She understandably didn’t even want to finish reading the letter. Ultimately, though, she heard Ellis out, allowing her to express her wish that she’d been able to be “true sisters” with Mer. (Better late than never.) Aww… then a feverish Maggie saw a vision of her beloved adoptive mother, who was everything that Ellis was not.

SINCERELY YOURS | As the episode neared its conclusion, Mer admitted to Nick that — shocker — she also has a temper. She wasn’t scared that he was a hothead. “I just… when I’m falling in love, it scares me,” he said. “I don’t love the feeling of losing control.” And he was doing exactly that with Mer. Back in Seattle, Zola asked Winston if he thought her birth mother ever thought about her. He assured her that it was normal to wonder. (OK, those two are super sweet.) As Amelia packed up to leave Minnesota, Kai reminded her that she could stay. But she couldn’t — she was a mom. “I hope that part of me doesn’t scare you away,” she added. Once Mer was home, she marveled that Ellis’ letter didn’t even seem like her. “Are you glad you read it?” asked Amelia. Maggie wasn’t sure, she just felt like she should. She’d long felt like something was missing and that something was Ellis, but she didn’t think so anymore. With that, she burned the letter. (Um, shouldn’t Mer’s fire alarms have been going crazy?)

So, what did you think of “The Makings of You”? Did anyone not choke up when Diane appeared to Maggie? (Just me?) Hit the comments.