For Elizabeth Henstridge‘s directorial debut, as a cast member of Agents of S.H.I.E.L.D., she wound up delivering one of TV’s greatest time loop episodes. And while her second time behind the camera, for The CW’s Superman & Lois (airing this Tuesday at 8/7c), didn’t involve such a brain-hurting, circular narrative, it presented challenges of its own, which she details in the TVLine Q&A below.

In the episode “Anti-Hero,” Superman (played by Tyler Hoechlin) — now detained alongside his brother Tal-Rho (Adam Rayner) — urges Lt. Anderson (Ian Bohen) to investigate Ally Allston (Rya Kihlstedt), while Lois (Elizabeth Tulloch) receives some very upsetting news. And that’s not the half of it, folks.

TVLine spoke with Henstridge — who currently costars on Apple TV+’s Suspicion — about excitedly visiting Smallville, pulling no punches with a brutal fight, and lessons learned from S.H.I.E.L.D.

TVLINE | How did this particular directing opportunity come to you?
This is my dream show and my dream job, so I was gunning for a while to direct an episode. I love the superhero genre, and I kind of launched a targeted attack on Berlanti Productions [Laughs], aiming toward a lot of his shows. Superman & Lois is top of my list, so with my [directed] episode of S.H.I.E.L.D., I was able to get meetings with people over there and work my way through to getting to meet with [showrunner] Todd Helbing. I just love everything he does, I love what he says in the shows that he’s involved in, and I love Superman & Lois, so I basically just talked his ear off for an hour. I think that to shut me up he was like, “You can helm an episode! 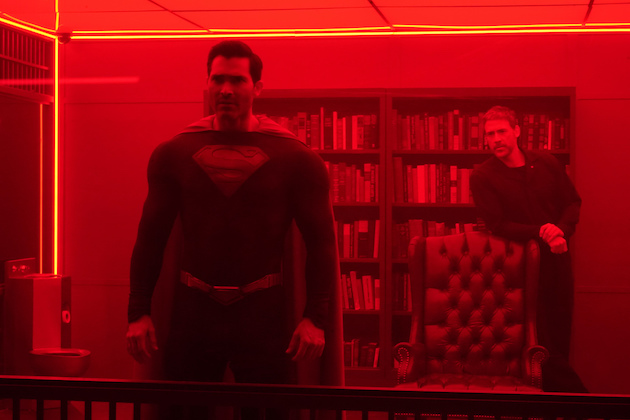 TVLINE | The S.H.I.E.L.D. episode you directed of course handed you a doozy of a premise, and you in turn delivered one of TV’s great time loop episodes. What challenges did this episode of Superman & Lois present?
Thank you! It has a lot of fighting in it, and a lot of wire work, a lot of big green screen…. I’ve done green screen, but when I walked into this set I was like, “Oh!” I may have been overconfident.

TVLINE | You’re, like, shooting a fortress and it’s one Styrofoam boulder and the rest is all green screen.
Exactly! And the flying scenes are just so specific to shoot…. So yeah, basically we have a whole act that’s a fight, and as an actor I didn’t do that much fighting, but I shadowed a lot and I’ve been around it. But it’s very different when you’re in the driver’s seat and 200 people look to you like, “All right, what do we do? That was a challenge in some ways, but I loved every second of it. They have such an incredible team over there — Rob Hayter heads up the stunts and he’s brilliant, and the CGI team is amazing…. I felt very supported.

And then they shoot in a very specific way, using anamorphic lenses [for a cinematic look and aspect ratio] which I’ve never shot with before. They have a real identity which I love, but you do have to get up to speed with that so I don’t ruin my favorite show. 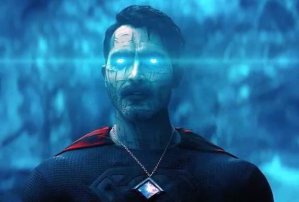 TVLINE | You talk about all the fighting, and on top of that you’ve got Tyler Hoechlin playing two different characters in those scenes. Is he the hardest working man in show business right now, from what you saw?
Oh my gosh. I think so. I think so. There was one moment where I was like “Hang on, break down for me your work week…,” because he has to learn all the fights, from two different sides if Bizarro is there, and he has to learn the [alien] language, which is a whole different beast, and then he has to learn the next script while we’re shooting the current script…. It is incredible, but his work ethic is amazing and he does it all with a big smile on his face. He and Bitsie [Tulloch, who plays Lois] set a brilliant tone with the show, but it’s amazing how hard they all work. It was really, really impressive.

But yes, the Bizarro/Superman aspect of it within a fight scene that has, what, five people in it? With CGI, and wires? It was a lot. It was a puzzle which was very satisfying to deconstruct and then piece together and to see the edit. I’m so proud of how hard everybody worked.

TVLINE | Do you think that if you instead hailed from a procedural, you’d have been thrown by the amount of green screen, wire work, etcetera, or might you not have been pursuing an opportunity on a genre show?
It’s tough to know. Agents of S.H.I.E.L.D. gave me many gifts, and one of them is the knowledge that I love fight scenes. I love consuming them as a viewer and I also love being there when they’re happening. I love stunt people and hearing how their minds work, and how diligent they are with training and creating these incredible, character-driven action scenes. I think what I love about Superman & Lois and some of these other superhero shows is you get the best of both worlds — in TV you get to know these characters over hours and hours and hours, so you care about them and you earn those very emotional moments. But then you also get to do this kickass fight scene with all his crazy stuff. 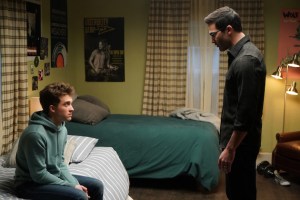 TVLINE | What kind of drama will we get from your episode, both on the family front and on the superhero front?
Oh my gosh, we’re going to break your heart. You need a pack of tissues, and then you also need a pillow to squeeze into and to punch and to hide behind. It’s an episode that has everything that I would want, and I think we really deliver on all fronts. The acting in it is phenomenal and we’ve earned these really big moments of emotion and turning points for a bunch of characters. We also get these big, big sequences that have a lot of elements to them, and we get Bizarro, and we get things that I think people are going to have strong opinions on. [Laughs] And we get to see the genesis of a couple of characters that is going to have a massive impact on where the season goes.

Want scoop on Superman & Lois, or for any other show? Email InsideLine@tvline.com and your question may be answered via Matt’s Inside Line.