For her directorial debut, Marvel’s Agents of S.H.I.E.L.D. star Elizabeth Henstridge wasn’t handed any ol’ episode, but a “time loop” crisis for which she had to manage numerous, slightly different takes on a handful of repeated scenes.

In this farewell season’s ninth episode out of 13 — titled “As I Have Always Been” and airing tonight at 10/9c — a “time storm” ravages the Zephyr, propelling it ever closer to destruction while simultaneously forcing Daisy (played by Chloe Bennet) to attempt to save the team over and over, until a solution is found… or the ship is swallowed into a void.

Without spoiling a thing, this time loop, though often mining the situation for humor, will have consequences for the rest of the season, as Henstridge shared in this TVLine Q&A.

TVLINE | You have said that you shadowed some directors over the years but in general have simply paid attention to what they do. Were there any particular cues you took from Clark Gregg when he directed [in Seasons 5 and 6]?
Oh, yeah — loads. He’s always been such a brilliant role model for me, a No. 1 mentor really. I mean, just the way that he interacts with the crew — he’s so positive, and it’s a collaborative experience when he’s on set. He has such a brilliant rapport with everybody. Also, he just has a good time with it! He realizes that this is entertainment that we’re creating, “so let’s have fun while doing it.”

TVLINE | What were the biggest challenges that this script presented for you as its director?
All the time loops! We’re repeating the same day at many different times, so as a director looking at it you go, “How am I going to keep continuity in my mind and keep everybody on the right page, as far as what has happened and what hasn’t happened?” Because you shoot every scene in that set from one angle and then turn around to do the other, by halfway through the day your brain is kind of mush. By the time the camera has turned [around] you’ve already done a whole day’s work and then you start at the beginning and do it all again [from a second angle]. That in itself is an endurance test.

And then as a director, you have to think, “How am I going to keep this interesting? How am I going to shoot the same scene over and over again and keep the audience engaged, and have it all make sense?” You’re spinning a lot of plates but it was a brilliant challenge. I’m so grateful that I got this episode, but it was a learning curve.

TVLINE | So to be clear, when you are doing, say, 11 slight variations on the same scene, since you already have everybody on that particular set, you just go ahead and bang out all 11 slight variations in a row…?
Yeah. Yeah. It was kind of nuts, to be honest. [Laughs] I’ve never had so many color-coordinated, highlighted notes in my life.

TVLINE | And you are played pretty heavy in this episode, too, as Jemma.
It’s funny — watching it back, it seems a lot more than I remember. It was a trip, for sure, but we had a good structure in place, we had a plan, and I obviously worked closely with the writer, Drew Greenberg, who was on set the whole time…. They did provide playback for me so that I could watch [my scenes] after each take — obviously I can’t see what I’m doing in a scene, necessarily — but I didn’t really use that, because it can take up some time. But the other actors were extremely supportive, so that was a huge deal.

TVLINE | TV and the movies have of course done plenty of time loop stories. What “special ingredient” did Agents of S.H.I.E.L.D. add for theirs, that makes it a bit different from others?
No. 1, we had the best writer in the whole world, Drew Greenberg, writing this one. It moves so quickly, and he’s not afraid to put extreme comedy in there but also extreme tragedy. We see from the trailer that Coulson refers to having to watch people die over and over again, so there’s a lot on the line in this episode. There are comedic moments, where we see actors stretch those muscles, but there are also extremely sad moments that will have a huge impact on the rest of the season, with only a few episodes left. 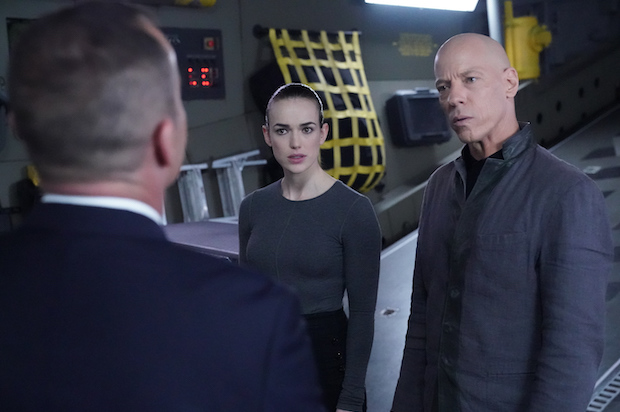 TVLINE | Speaking of the extreme comedy, I feel like you got to direct an especially sassy Coulson in this episode.
[Laughs] Yes! Yes, yes! Him being OG Coulson in his suit just made my life; I absolutely love that version of Coulson. That’s how I got introduced to him. And then to see Clark be sassy Coulson — that’s exactly the word I’d use — you really get to see all the incredible ways that he approaches a scene. He’s been playing this character for so long, when you see him bring out sassy Coulson, you realize, “Oh my gosh, I haven’t seen that in a while.” It’s what makes Marvel Marvel, the quips and the brilliant turns that he does. I’m excited for people to see this version of Coulson coming out.

TVLINE | Lastly, and you touched on this last week: Once we finally do see Fitz (played by Iain de Caestecker) again, is it going to be worth the wait? Will his fans, will the FitzSimmons fans, be sated?
It will definitely be worth the wait. it will help to explain a lot of what has happened this season. And as always, Iain de Caestecker is incredible, so he’s not going to let anyone down.

TVLINE | Was Iain off doing another project? Was he not available for this first stretch of the season?
Oh, the “FitzSimmons saga”…. Who knows the rhyme or reason. But all will be revealed soon. I can’t exactly say when or in what capacity, but questions will definitely get answered.

NOTE: After our chat, Henstridge confirmed for me that she has not yet seen Hulu’s recently released Palm Springs — but I strongly encouraged her to do so!