The dropout in The Dropout is Elizabeth Holmes, a biotech entrepreneur whose claims to have revolutionized medicine turned out to be a giant fraud that bilked a lot of people out of a lot of money. And in the premiere, which began streaming Thursday, we learn how Elizabeth got her start.

Hulu released three episodes to kick off the series; in a moment, we’ll want to hear what you thought. But first, a quick overview of the opening hour.

Amanda Seyfried (Big Love) plays Holmes, who is first scene giving videotaped testimony as her company — Theranos — is investigated for potentially violating federal law. The footage is intercut with scenes of Holmes leading a video crew around the Theranos offices and explaining what her company does. The headline: Theranos claims it can run up to 70 diagnostic tests using only a single drop of blood, rather than the vials and vials normally required.

Then we flash back to Holmes’ youth. In December 2001, she and her brother come home from school to learn that the company their father works for, Enron, has collapsed, and Dad has lost his job. “They lied to me about everything. The whole company was a fraud,” he says, devastated. Sense a theme yet?

As Elizabeth mulls her father’s unemployment and gazes at the poster of Apple svengali Steve Jobs on her bedroom wall, we learn that she’s driven to invent something that changes the world. In the summer before she attends Stanford University, she attends an immersion program in Beijing but is irked by how few of her fellow students want to speak Chinese when they’re not in class. 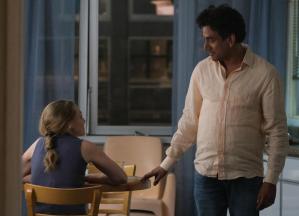 She builds a friendship with a man named Ramesh “Sunny” Balwani (played by Lost‘s Naveen Andrews), a mid-career student who started a software company and sold it for $40 million. “I want to help people,” she tells him, “and I want to be a billionaire like Steve Jobs.” They’re very close by the end of the summer, but the relationship remains platonic as she heads back to start her freshman year at college.

Elizabeth loves Stanford. When she makes an observation that forwards one of her professor’s research projects, he admits her into the graduate-only group working in his lab. At the start of her sophomore year, she pitches him an idea: a patch that can administer meds and monitor the patient at the same time. He puts her in touch with another professor (played by The Conners‘ Laurie Metcalf) who quickly shuts her down: “I’m sorry, your idea’s impossible, but that’s the way the world works.” 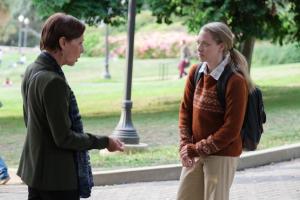 Via a brief interlude with the testimony footage, we find out that Elizabeth and Sunny — who eventually became Theranos’ president and chief operating officer — were romantically involved but did not divulge that information to investors. Then we’re right back at Stanford, where Elizabeth was raped at a party but university officials call it a he-said/she-said when she brings it to their attention. Elizabeth’s mother believes her, though her advice on how to handle the trauma isn’t the healthiest: “You just put it away and forget it, and then one day, you’ll just be fine again.” Oof. In the aftermath of everything, she rebuffs Sunny’s attention, telling him that it’s “f–king weird” that they talk every day. “Don’t call me again,” she says.

The story then jumps to March 2004, when Elizabeth thinks she’s locked onto her world-changing invention: a device the size of an iPod that will allow patients to test their own blood at home, with just one drop. Her male professor is on board. She rents office space. She asks her parents to invest, explaining that they can put her tuition money toward the venture, given that she’s going to drop out of Stanford.

But one day when she’s at the office, which is in a dodgy section of town, a stray bullet hits her car and scares the bejesus out of her. She calls Sunny, who finds her shaken on the office floor. He wonders why she made contact after specifically requesting that he not do so. She hugs him, and he returns the embrace. “I’m going to protect you,” he whispers, and they kiss.

Back to the testimony! Elizabeth is questioned about spreading false info about her customers’ health and endangering their lives. She looks cowed. “At that time,” she says, “we thought that we were doing the right thing.”

Now it’s your turn. What did you think of Episode 1? Grade it via the poll below, then hit the comments!