In this week’s A Million Little Things, Maggie Bloom is 30, flirty and alive-ing.

So when her friends lure her to a surprise birthday party organized by her boyfriend, Cam, she’s deep in the process of taking stock of her life so far. As she admits to Gary on the elevator up to the bash — she thinks they’re just going out for a drink, but then he alerts her to the horde of pals waiting for her at the restaurant — she’s a little hesitant to revel in the milestone birthday given her cancer battles in her 20s. 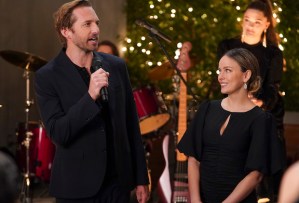 Gary understands it. But he reminds her that when they attended their fellow survivor Elena’s remission party the year before, “You told her not to let the fear of cancer stop her from living.” He adds, “The rest of your life is waiting up there for you, Bloom. I think you should show up for the rest of your life.”

So she does, and it’s sweet. But Cam’s devotion to Maggie is a little too much for Gary to stand, so after a while, he tells Rome he’s leaving and heads for the elevator. At the last moment, Maggie yells, “Wait!” and steps into the car. Perplexed, Gary wonders what she’s doing. “I’m showing up for the rest of my life,” she responds, grabbing his face with both hands and pulling him to her for a kiss. They break apart as the doors reopen on the top floor (apparently Gary never hit a button), and Cam is standing there, apparently oblivious to what’s just gone down.

Could this be the first step on the return path to a ‘ship A Million Little Things fans have been missing for seasons? Or is it just to blame on the evening’s mix of high emotion and open bar? And are you in favor of Gary/Maggie 2.0? Let us know what you think in the comments!