You know the rule: If something seems too good to be true, it probably is. So neither we nor the scrappy survivors of The Walking Dead should have been surprised to start discovering in Sunday’s episode that the Commonwealth wasn’t all bright colors and baked goods. Beneath its candy-coated surface, it was infected with a strain of classicism so virulent, it appeared to be about to spark a revolt. Read on, and we’ll discuss not only the dramatic fashion in which we found out about the dissent among the ranks but most everything that went down in “New Haunts.”

‘IT TAKES A MINUTE TO GET USED TO IT’ | As the hour began, our regulars had been in the Commonwealth for 30 days. At that point, we as well as they got a taste of the lavish lengths to which the Commonwealth went to celebrate Halloween. Pretty much every holiday, we’d soon learn. (Picture Season 9’s fair at the Kingdom, only with more costumes and fewer beheadings.) We also got little insights into different characters’ states of mind. Daryl, who along with Rosita was in basic training to become a trooper, was sensibly skeptical of the fantasia that was unfolding before them. Connie was enjoying being a reporter again — though she revealed to Daryl and Carol through Kelly that she’d interviewed Pamela before the apocalypse — and had gotten the governor’s uncle kicked out of Congress. (Scandale!) Judith made a fast friend of a sweet girl named Mae, who bought her a Motörhead album (since Lil’ Ass-Kicker wasn’t yet on an allowance). And Ezekiel appeared to be getting ready to kick the bucket, lying to Carol about how good he felt and giving away prized possessions like Shiva’s leash (which went to Jerry and Nabila’s tiger-outfitted son).

Determined to get at the truth about Ezekiel’s prognosis, Carol swiped a hospital janitor’s keys and helped herself to her ex-husband’s medical file, only to be caught by Tomi, who’d apparently been forced back into service as a surgeon. Rather than rat her out, the doctor revealed that the former king’s only chance was surgery, and his odds of getting to the top of the list for knife time were… Eh, what’s worse than nonexistent? But soon, Carol saw an opportunity to improve Ezekiel’s chances. Spying Pamela’s bespectacled assistant Max telling Lance that his wine wouldn’t pass muster at the boss’ masquerade ball, Carol snuck out of the Commonwealth, dispatched a few walkers in a wine cellar and proffered a few bottles of primo vino. What did she want in exchange? asked Lance. Ezekiel moved way the hell up the list of surgeries, of course. 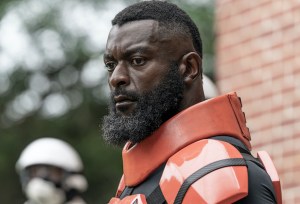 ‘RELEASE THE ROTTERS’ | Meanwhile, Mercer put Daryl, Rosita and a bunch of would-be troopers through an exercise called Kill House in which they were supposed to show off their speed and teamwork. There were some glitches — Daryl’s partner came so close to being bitten by a walker that Mercer had to intervene — but our gruff hero still so impressed the big kahuna that he was allowed to… ew. Gross. Watch over snotty Sebastian as he pretended that he had what it takes to be a fighter of any kind. (Has there ever been a more loathsome character than Pamela’s son?) Needless to say, the brat would’ve given a walker indigestion during the exercise, had Daryl not stepped in to save his ass. Sebastian’s delightful thank-you? “Why did you do that?!?” Afterward, Mercer advised Daryl that he shouldn’t have stepped in, at least not by putting an arrow through the walker. The Commonwealth could be nirvana for Daryl, the soldier added, if he could get out of his own way. And he was motivated to do so — both Judith and RJ expressed their desire to stay in the CW.

That evening, at Pamela’s masquerade ball, the class distinctions between the Commonwealth’s haves and have-nots became painfully clear. While Magna was relegated to kitchen staff, lawyer Yumiko and reluctant doctor Tomi drank Carol’s fancy wine, and Sebastian, Lance and Mercer were greeted at the door like they were superheroes. (Sebastian? Really?) After Princess got Mercer’s attention, he invited her to make a dull night more interesting by joining him. “There’s a dress code,” said the doorman with the clipboard. Princess looked adorable dressed as… well, a princess. But ugh. It was like that. Still, Mercer got her in. Past the velvet rope, a familiar-looking waiter begged to speak with Pamela but was denied access by Max. Who was he? OMG, that was the soldier that Princess had beaten up back in Season 10, she realized. What was he doing serving canapés? 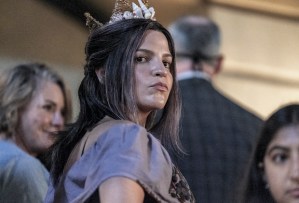 ‘WE’RE PUTTING THE WORLD BACK TOGETHER THE WAY IT WAS’ | Soon enough, we learned why Tyler — that was his name — was schlepping pigs in a blanket instead of rocking his Star Wars costume. As Pamela gave a speech about how awesome the Commonwealth was, he cried BS, saying that it most certainly did not care about all of its citizens. Before we knew what hit us, he had slashed the governor’s eye-roll-inducing new painting of her father and taken Max hostage at knifepoint. “I would’ve died for this place,” he yelled at Pamela. “What’s my name?” She didn’t know but was eager to mollify him. In the end, Tyler discarded his human shield and made a run for it, only to be apprehended by Daryl… who shrewdly gave the “capture” to Sebastian to stop Jerkface from “hate-smiling” at him. As quickly as Tyler was marched back through the party in cuffs, he was led away again, unsettling Pamela by yelling that there were thousands more like him. “Resist the Commonwealth! Visibility for workers! Equality for all!” he shouted. Go, Tyler, ya poor, doomed bastard.

As the gala wound down, stormtroopers kept Connie from witnessing Yumiko and Max paying… who? The crowd that had cheered for Sebastian like he was Timothee Chalamet? (Help me out here, people.) Lance told Carol that her wine delivery had been a fine first step toward helping Ezekiel. Hmm, but how many other steps did he imagine there were? Rosita was tasked with questioning Magna about Tyler. But Yumiko’s ex knew little about him — and wasn’t keen on the Commonwealth’s “the rich stay rich, the poor stay poor” operating system. Ezekiel, continuing what appeared to be his farewell tour, delivered to Carol a box that had been Henry’s. From there, we cut to day No. 33 in the Commonwealth, a point at which newly-suited stormtrooper Daryl was able to buy Judith a record player with which she could listen to Motörhead’s “Eat the Rich,” and fellow soldier Rosita discovered during a raid a secret room in an apartment that housed a whole lotta resistance-movement posters.

So, what did you think of “New Haunts”? Will Ezekiel live long enough to get his surgery? Have we seen the last of Tyler? Is Magna part of the resistance? After commenting, read what showrunner Angela Kang says about the hour.