In Sunday’s The Walking Dead, Princess revealed that “small, dark spaces just do bad things to my head.” Of course, by the time she made that admission, she’d already been locked in a railcar long enough to have hallucinated and nearly beaten someone to death. So it wasn’t exactly a “better late than never” confession. Who’d she see, and who’d she pummel? Read on and find out.

‘I DIDN’T KNOW WHERE THAT STORY WAS GOING WHEN I STARTED’ | Picking up where the midseason “fauxnale” left off — in October of 2020! — “Splinter” began with Princess, Ezekiel, Eugene and Yumiko being surrounded at their rail-yard meeting spot with Stephanie by what looked for all the world like Star Wars stormtroopers. When Princess reached for a trooper’s gun and wound up getting manhandled, Yumiko attempted to intervene and, for her troubles, got coldcocked by a guard. Once the foursome had been put in separate railcars, Princess did her best to keep her claustrophobia in check. The only thing that really helped, though, seemed to be talking to Yumiko in the next car. Trying to keep Yumiko from falling asleep for fear that she had a concussion, Princess told a story about how she’d once gotten an infection in her finger from a splinter — like the one that she now had from picking at the planks that separated her from her pal. The infection got so gross that Princess’ stepfather wouldn’t let her eat at the dinner table. “This was my house first,” she’d told him — and had gotten smacked across the jaw. When she beseeched her mom to do something — “Please don’t send me out to the garage to eat by myself” — her mother’s response was, “Then don’t eat.” Yeah, as Princess put it, “Home was no bueno.”

At that, Princess heard Yumiko collapse in the next car. Suddenly, troopers were in there, taking her away, it sounded like. “Are you helping her?” Princess asked. “Shut up!” they replied. Charmed. The morning after, Princess saw a conveniently easy-to-remove square board through which she could exit her makeshift cell. Just next door was Eugene, who refused to let her free him and implored her not to do anything to make Stephanie’s people think them unworthy of their allegiance. “All my kinfolk are counting on me to be a cross between Santa Claus and a guardian angel, if you will,” he said as only he could. So she reluctantly returned to her railcar… just in time to be taken away by a trooper, stripped and searched for bites, and hustled into a room for questioning. It did not go well. Princess appeared to be under the impression that she could do the questioning, starting with where was Yumiko, was she OK, and why couldn’t she see her friends? Ultimately, the trooper in charge smacked her across the face just as her stepfather had and said that the reason she couldn’t see her group was “’cause you’re being a bitch.” Wow. Charmed, Part 2. I prefer Rick’s three questions you ask a stranger anytime over this treatment. 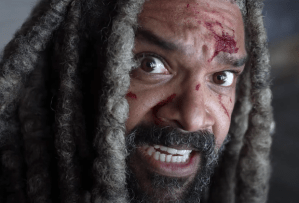 ‘PEOPLE SUCK’ | Returned to her railcar, Princess eagerly told Yumiko — who might not even have been next door — that she hadn’t talked “like some kinda narc” but still might’ve messed things up. She’d liked that the trooper had called them friends, though. “They used that word,” she excitedly noted. (Side note: Princess breaks my heart.) Shortly, she heard Eugene being taken away, and well, hello! Ezekiel dropped into her railcar from above, a move that he said “took some epic maneuvering.” He was ticked that she’d been hit and promised, “No one is gonna hurt you anymore, not while I’m here.” But he wouldn’t be there long — neither would she. He wanted them to amscray. When she protested that they couldn’t just leave Eugene and Yumiko, he shot back, “You don’t think I know that? They’re my friends!” Ow, man. That had to hurt worse than the blow to the jaw had! Shortly, the former king apologized to Princess and expressed his fear: “What if Eugene trusted the wrong people this time?” People were, after all, awful. Princess was so eager to do the right thing; they needed a plan, a good one. Before they could hatch even a mediocre one…

… in came a trooper with her lunch. Ezekiel suddenly nowhere to be seen, Princess started apologizing for having been hostile during the interrogation. Then, outta nowhere, Ezekiel knocked out the guy! That was not the better plan for which she’d been hoping. When the trooper came to, the baby-faced fellow insisted that Yumiko had to be getting help. Why was that? “For the benefit of all and for all who seek solace at our gates — it’s what we stand for,” he explained, adding that everything that was going on was just standard protocol. “The place we live is a good place… We’re careful because we have a lot to lose.” As for him, he was a rookie, so new that his rifle wasn’t even loaded, he said — just as he lunged for it. In the ensuing fight, Ezekiel completely lost it and looked like he was about ready to beat the life outta the guy. Then, suddenly, Ezekiel was gone. Seeing blood on her hands, Princess realized that she had been the one wailing on the trooper. She was back in reality now, though, or almost. When she took the gun and tried to leave the rail yard, she was met by Ezekiel, this time with two walkers for companions. 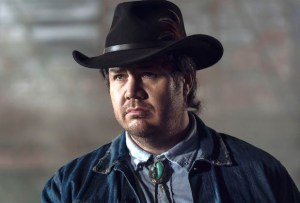 ’TAKE YOUR FREEDOM’ | This Ezekiel in Princess’ mind attempted to convince her that she could leave behind her friends. Hell, they weren’t even friends — she’d only met them a week ago. “That’s a lifetime in apocalypse years,” Princess noted. She didn’t need them, though. True — “I’m a goddamn superhero on my own,” she acknowledged. But if she left, she’d be just like her mother. And yeah, there were crummy people, but there were good ones, too. Like Eugene and Ezekiel and Yumiko. And they had come back for her. So she had to do the same. Returning to her railcar, Princess apologized to the trooper for beating the crap out of him and explained that she didn’t like small, dark places. “But who does, so screw you for judging.” Since she had f—ked her friends’ chances of being accepted by his group, and he was gonna get in big trouble for becoming her prisoner, she came up with a solution — hey, just as her splinter came out. What if she answered their interrogation questions? Since that might help, that was just what she did. So when could she see her friends? “Right now,” he said, throwing open the door to reveal that they were all outside wearing hoods as if about to be executed. And just like that, one was thrown over Princess’ head, too.

So, what did you think of “Splinter”? Among fans of the comic-book series, Princess is a polarizing character, but I 100-percent love what Paola Lázaro is doing here. How about you? Hit the comments.