This is a show in which the dewy Mandy Moore convincingly plays a 70-something. This is a show that coats Jon Huertas’ glorious mane in silver and white anytime the story inches past the mid-1990s. This is a show that would throw a prosthetic on a dog to denote the passage of years. But the good people in the hair and make-up trailers during the shooting of this episode took one look at Visnjic, lightly dabbed at his temples with a brush that had two molecules of gray powder on it, and said, “That’ll do. That’ll do.”

It’s quite a thing to behold — as is Beth’s evolution into the type of dance professional she always wished she had in her life. Read on for the highlights of “Our Little Island Girl: Part Two,” which was co-written by series star Susan Kelechi Watson and Eboni Freeman, then make sure to read Kelechi’s thoughts about the hour at the bottom of this post.

‘I CAN AND I WILL’ | The episode goes for the heart right from its open, which is a flashback to Beth asking her father to tell her the story of her taking her first steps in Jamaica. “And right then, you became my little island girl who danced before she walked,” he proudly tells his young daughter. Aw Carl Lumbly, you are the best.

In a present-day montage, we watch as Beth tours the dance facility for which she had an interview way back; it’s the same place that we’ve seen in the flash-forward to the time of Rebecca’s deathbed scenes. Beth gets a job overseeing the school’s scholarship program, and she channels Debbie Allen as she addresses the few kids she chose from the hundreds of applicants. “You belong, so you take up space, yes?” she asks them, then has them repeat, “I can and I will” until they believe it. 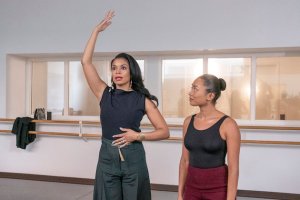 A student named Stacey isn’t as “polished” as the others, notes one of Beth’s co-workers, but Beth assures the woman that the dancer will be ready. But even Beth looks like she’s worried; the girl is clearly struggling.

One evening, Beth walks by one of the school’s practice rooms as Stacey is trying, and failing, to nail her pirouette. The teen dejectedly tells Beth that her father wants her to be a lawyer, and it’s clear that she’s thinking about giving up dance. But Beth bucks her up: “I chose you because I saw a fire in you that I recognized in myself,” she tells her.

THE FALL AND RISE OF BETHANY CLARKE | But that fire took a while to rekindle, as we see in a flashback to Beth and Randall: The College Years. When the young couple goes out to dinner, Beth notices her former ballet teacher Vincent (Visnjic) sitting at the bar. She freezes — “When my dad died, he didn’t even pick up the damn phone,” she tells Randall — but then gathers herself and approaches Vincent to give him a piece of her mind. But he’s very happy to see her, and that throws her off, so after they chat for a moment, she returns to her table and asks Randall to leave with her.

Back in the present, Beth is vibrating with nervousness before the scholarship students’ showcase. Randall, Tess, Déja and Annie are in the audience. Beth whispers that she can’t fail again, and Randall simply tells her “You won’t.” Which is sweet, but not enough, because she demands a Randall Pearson Patented Pep Talk from him… then runs out a few words in because she has to pee. (Ha!)

During the show, Stacey falls during the pirouette section of her solo. The devastated dancer is frozen to the ground in horror, so Beth walks out on stage in front of everyone and sits down beside her. After ascertaining that the girl isn’t hurt, Beth tells her that she, too, had a fall of sorts when she was a teen. And it was “bigger than this,” she reassures Stacey, who is mortified that she let Beth down. “You cannot disappoint me,” Beth promises, “and I ain’t going nowhere.” In the audience, Randall whispers to his girls, “You’re going to forget a lot about these years. But look at your mother right now and remember this: Don’t you ever forget how incredible that woman is.”

At home afterward, Beth calls Vincent, who just happens to be pulling a late night at his ballet academy. She gathers her courage to confront him about how abandoned she felt after her father died. “I’m sorry you felt that way, Bethany, but it wasn’t my job to coddle you,” he says. “It was my job to give you the technique you needed to be a star.” And that’s all the push she needs to tell him to take his toe shoes and shove ’em where the sun don’t shine: “I’m the little island girl who danced before she walked, and you took that from me,” she says. “But now I’m taking it back. I know what I am, and I know what I was meant to do now.”

And in a brief flash-forward, we see that Stacey goes on to become a principal dancer with the Houston Ballet, and that she is just the first of many students Beth shepherds to greatness.

In a moment, we’ll hear from Watson about what it took to bring the episode together. But first in other Pearson news:

* In a flashback to a few days before one of the Thanksgivings after Jack died, Kevin is surprised by how much weight Kate has put on. Kate is surprised by how much Kevin is drinking. Kate is horrified when Kevin admits that he cheated on Sophie; and when Sophie finds out that Kate knew before she did, it drives a wedge in their friendship. Rebecca and Miguel invite their sorta-significant others, Matt and Marguerite respectively, to Thanksgiving. 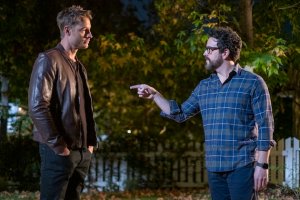 * In the lead-up to present-day Thanksgiving, Kevin assumes Madison and the twins are going to accompany to his family’s holiday dinner at the cabin. But she wants to stay in Los Angeles (with the kids) to celebrate with Eli. All of this comes to a head at the taping of The Manny reboot’s pilot. Toby’s also acting like a jerk while he’s on set, which doesn’t help anything. But after Kate gives her brother a stern talking-to, he sees the error of his anger and swings by Madison’s to say that he’s fine with her and the kids skipping Pearson Thanksgiving. And Eli makes a point of taking Kevin aside to say that he’s planning on sticking around for the long haul.

Read on for our conversation with Watson, starting with how she and Freeman began writing the next chapter in Beth’s story.

TVLINE | Talk to me about how you went about writing this episode with Eboni Freeman.
[Writer] Kay Oyegun was sort of helping us sort of get started with everything, and then Eboni and I took it away… Eboni went away and wrote half of it that had to do with the Pearson clan, and I wrote the half that had to do with Beth. Then we came together. I was done writing my half in, like, two days… Then we put both together, and then we went through it together and rewrote the whole thing together. Then we sent it away to Kay, got some notes, came back, made those changes and then we sent it to Dan [Fogelman, executive producer]… Then it goes through the works.

… I did not know that I wasn’t going to just write about 25 pages and then send it away and be like, “OK, I wrote on This Is Us!” [Laughs] I started writing in August, and the last rewrite I did was right before we shot in November. So, it’s a process. 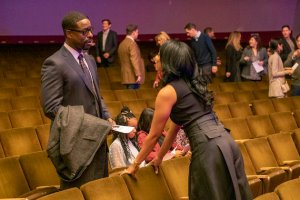 TVLINE | What do you think Beth has in her at the end of the episode that she doesn’t when we see her at 19 or so, when she sees Vincent at the bar? What, in your opinion, is the missing piece that makes her able finally to confront him?
I think the courage. I think there was just something that in experiencing now how she can make change that gave her the courage of “I know what I’m doing is right, because I’ve seen it.” When you see the episode, Beth begins to institute change in the way that these dancers are treated, more like people who also have so much going on in their own lives that they’re dealing with, their own issues. It invites a conversation around mental health and wholeness and wellness and not just focusing on a person’s talent regardless of who they are as an individual…

She so knows that by the end of the episode that that’s the right position to have that she has the courage now to say the things that she couldn’t say 20 years ago as a teenager. So, I think that’s really what was her motivation.

TVLINE | To confirm: The school she’s working at now is the one we’ve seen in the flash-forward?
Yes.

TVLINE  | Around the time of the original “Our Little Island Girl,” you and I spoke about the prep and conditioning to get yourself ready to dance in that episode. Was there ever a conversation about whether you would dance in this one? And if not, was it a relief not to have to prepare in that way?
I think there was a realistic aspect to it: She’s not a dancer anymore. I mean, you’re always a dancer if you’re a dancer, truly. It’s like you’re always an artist if you’re an artist. But she’s not performing anymore. She created a space for herself, which was more important than getting back to dance. It was like, how is she going to take this thing of the past and create this whole new space for herself that in this old-ass institution that she didn’t even want to be a part of?

She had that conversation with Rebecca and it’s like: Then change the system. Do something that makes it something that you want to be a part of that you can have your special touch on. That’s what this is really about is also kind of showing us, I hope, because it showed me. It’s like you can create ways for yourself. You don’t have to just follow the paths that have already been traveled. You can say, oh, I feel like there’s a need for this. Let me be the person who meets that need and make space for myself.