Perhaps it was Dee’s words of wisdom, the bounty hunter’s aggressive attack, or all of the above. But when The CW’s titular Naomi chose the person she wanted to be romantic with, she picked and kissed Nathan.

Kaci Walfall, who stars as Naomi, says the smooch was doubly special because it was her first on-screen kiss. However, if you think it was romantic in real life, the actress attests that it was too technical to be anything close to mushy.

“The worst part was the mouthwash we had to keep in our mouths for 30 seconds because of bacteria,” Walfall adds. “Honestly, that was the most cringeworthy part of the scene, because it was burning the inside of my mouth.” 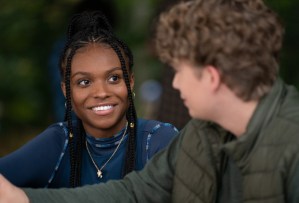 When The CW comic-book drama returns tonight at 9/8c with Episode 5, fans will see what happens to Naomi and Nathan now that they have kissed and what effect it has on Anthony (played by Will Meyers), the other boy who likes her.

“I was surprised she chose Nathan because there’s so much going on in her life,” Walfall observes. “But then I read the script and there were nuances that made me realize Nathan is one of the few people she’s able to be vulnerable with — and that is very hard for her to do. Nathan sees through her and provides a sense of normalcy, which she doesn’t have a lot of anymore.”

In Episode 4, Nathan was also the only person other than her bestie Annabelle (Mary-Charles Jones) who knew she really didn’t want to be class president. When she decided to drop out of the race, the first person she told was Nathan. The next couple of installments will allow that to play out while Naomi and the gang try their hands at sleuth work a la Scooby-Doo. Walfall cautions that fans shouldn’t get complacent.

“Episode 7 is going to get crazy,” she teases. “It’s one of my favorites. Episodes 5 and 6 are relaxed, but 7 is going to hit you with backstories you won’t expect to see.”

What do you think about Naomi choosing Nathan? Are you excited about where the show is going? Drop your thoughts in the comments.