This week’s Euphoria is a recapper’s hell but a viewer’s delight. Here’s why.

The episode’s main story concerns the staging of Lexi’s play, the thinly veiled version of her — and her friends’ — high school experience that she’s been talking about for weeks. That veil is so thin, in fact, that the episode often blends real-life events into Lexi’s version of them; at times, it’s tough to tell what’s actually happening in the lives of Rue & Co. and what’s unfolding on the auditorium stage.

But does it really matter? After all, everything that happens on this show is heightened in one way or another, whether it’s via hazy memory or illicit substances or super cool yet disconnected visuals. So just sit back like everyone in Lexi’s audience (well, except for Nate) and enjoy the insanity that is “The Theater and Its Double.”

PLAY ON, PLAYER | We go back to the day of Rue’s father’s memorial service at her house, where Lexi finds the grieving teen snorting crushed pills in her bedroom. Lexi reads her a poem, “Let This Darkness Be a Bell Tower” by Rainier Maria Rilke. As the drugs kick in, the camera pulls back… and we realize that we’re now watching the dramatization of this scene in Lexi’s play, called Our Life, in which Rue is a character named “Jade.” The real Rue — as well as the rest of their social circle — watches from the audience and slowly has the same realization that Maddy comes to as she whispers, “Wait, is this f–king play about us?!”

Throughout the hour, we see Lexi checking the crowd for Fez’s face; she’d saved a seat for him, and he’d said he’d be there. But the show rolls on, and no Fezco. What gives? We’ll get to that in a few.

Because the show! must! go! on! And on. And on. There are so many scenes and so many elaborate sets in Lexi’s staged roman à clef, I kept thinking that the thing must be a five-hour production. Also, what was the scenery budget? I’ve seen Broadway productions that would’ve killed for that school hallway setup.

Anyway, as the show continues, we get flashbacks to Lexi and Cassie’s childhood that are both happy (the whole family dancing in the living room) and sad (Lexi crying when her father was so messed up that he should not have driven her and Cassie home from getting ice cream, but he did). We see the night that Maddy stayed at the house as her parents were splitting up, when Cassie comforted her friend as she cried. And we get a good sense of Ethan’s versatility as a performer as he takes on the roles of both Lexi’s character’s mom — who cackles, tickled, in the audience — and the character based on Nate.

About that: The portion of the show that we see in this episode ends with a large scale, highly choreographed, gold-lamé wrapped and intentionally homoerotic number in which Stage Nate lip syncs to Bonnie Tyler’s “Holding Out for a Hero” while gyrating with the rest of the semi-clad members of the dramatized football team. The scene is a huge hit with almost everyone in the audience, though a lot of them are shooting furtive glances at Nate, who is mortified and bolts by the end of the song. 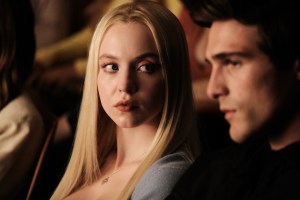 Earlier in the episode, we’d seen someone’s fantasy — Nate’s? Cassie’s? I’m honestly not sure — unfold as Cassie told Nate he could control “what I wear, what I eat, who I talk to… I belong to you, and I won’t ever complain, because I trust you know what’s best.” And then, later, Nate had been thinking about Maddy, then Jules, then throwing Cassie down on a bed, ripping her fishnets and putting his hand on her face the way Cal did to Jules. THEN — and I believe this lends credence to the theory I put forth last week — there was a very yucky moment that implied that Cal and Nate were both naked, only now it’s Nate who’s been flung down on his stomach on the motel bed. As Cal leaned over his son, Nate startled awake, and Cassie reassured him that it was just a nightmare.

The feeling between the two of them is decidedly less gentle as he storms out of the auditorium and she follows. He yells that the scene her sister wrote was “homophobic” and tells her to pack her bags and leave his house. “I’m done,” he says coldly, walking away as she watches him go.

WHERE’S FEZ? | Meanwhile, when Lexi’s not in character, she’s tearing around backstage like a tyrant, and it’s highly amusing. Still, where the heck is Fez?

We watch him getting ready, and it’s very cute how much effort he’s putting into looking good for the event. Fay is steaming his shirt, and everything is going along well until her boyfriend, Custer, shows up unannounced. Ashtray sees Custer whispering to Fay, realizes something hinky is going on, and slips a knife into his sleeve.

But Fez is unaware. So he slips on the steamed shirt and his sportcoat (my heart!), grabs a bouquet of flowers (my heart again!) and gets ready to go to the show.

So what gives? We don’t know. As a title card informs us at the end of the hour, the episode is “To Be Continued.”