The following contains spoilers from the Season 1 finale of HBO Max’s Peacemaker.

Though they arrived late (those “f–king d–kheads”), the familiar faces that showed up toward the end of the Season 1 finale of HBO Max’s Peacemaker still proved to be a superfun surprise.

To quickly recap: After going to (brutal, violent) war with Sophie and the other Butterflies outside the farm where the “cow” was being prepared for teleportation, Peacemaker, Adebayo, Economos and a wounded Vigilante emerged victorious. And as they heroically marched away from the battle scene, with Chris carrying an unconscious Harcourt in his arms, who would materialize in their path but the Justice League — in the form of Ezra Miller’s The Flash, Jason Momoa’s Aquaman and a silhouetted Wonder Woman and Superman.

After Peacemaker chides the superfriends for being tardy to the party, there are callbacks to his spreading of the rumor that Aquaman has…  relations… with fish. When Miller’s Barry indicates(/jokes?) that he thought the rumor was true, Momoa’s Aquaman shoots back, “F–k you, Barry” — after which the two share a chuckle. 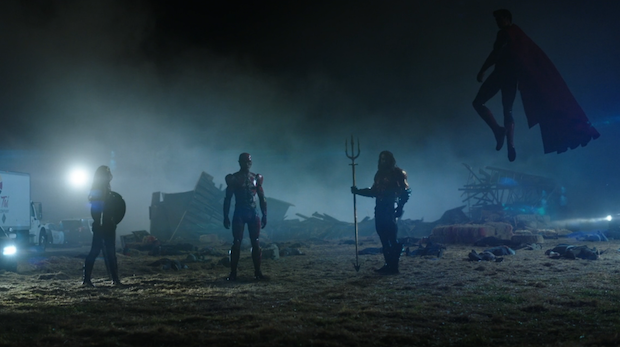 Speaking with our sister site Deadline, series creator James Gunn, who wrote and directed the Peacemaker finale, shared that beyond what made the final cut, Miller improv’d the “best outtakes of all time,” including a reference to Harcourt being a “little blonde boy.”

He then mentioned that Marvel — as in DC’s rival — deserves props for Miller’s cameo.

As he explained, “[W]e shot [Miller’s cameo] on the set and with the crew of Guardians of the Galaxy: Vol. 3,” which Gunn is currently filming. “They were kind of paying us back, though, because … we used the Peacemaker crew to shoot Chukwudi [Iwuji]’s screen test for Guardians 3, and DC was really cool about that, and then Marvel was really cool about letting us use our crew to shoot Ezra.”

As for how the two cameos came to happen in the first place, Gunn told our sister site Rolling Stone that Momoa was “game from the beginning” and even found the fish-f–king joke to be funny, while Miller’s involvement was locked down later in the process. (“I found out through some friends that Ezra likes my movies a lot,” Gunn shared.)

What did you think about the Peacemaker finale’s “super” cameos? Weigh in down below, and also grade the finale and the season as  a whole!