HBO Max’s Peacemaker entered the back half of its eight-episode season with the reveal that team leader Clemson Murn, of all people, has a Butterfly nested inside his head — meaning, he is under the sway of the very aliens that this ARGUS task force has been targeting.

At the close of the Jan. 27 episode, Adebayo (played by Danielle Brooks) was giving Peacemaker’s X-ray vision helmet a look-see when she happened to spot the winged ET inside Murn’s melon, at which point her boss let out a frightful screech and chased the rookie recruit into the parking lot out back.

What happens next? And what other surprises are on tap during the Suicide Squad offshoot’s final three episodes?  Ahead of this Thursday’s sixth episode, TVLine spoke with Murn’s portrayer, Chukwudi Iwuji — whose previous TV credits include Designated Survivor, The Underground Railroad and When They See Us — about the Butterfly reveals to come, and why the show’s opening credits are extra-special to him.

TVLINE | Did you know from go that Murn had a Butterfly flitting around inside his noggin?
I did, actually. One of the first conversations I had with [series creator] James [Gunn] and [executive producer] Peter Safran was about how I was actually a Butterfly. That was good to know but I didn’t let it affect how I played moment-to-moment, because I always try to avoid playing an arc. I try to let the arc take care of itself.

TVLINE | Now, I assumed that when Murn got blown back by the explosion at the senator’s home and the others scampered down into the cave, one of the Goffs’ butterflies creaped over and into him. Was that the case?
Oh no, he’s had it inside him long before that incident. He started this operation already as a Butterfly. We haven’t gone into the details of exactly when or where [it took him over], but it was long before that.

TVLINE | What else were you told about Murn when you took on the role?
Not much else, apart from the fact that he had some background in black ops, and he’s been recruited by [ARGUS boss] Amanda Waller. But you see, James [Gunn] is one of those gifted writers who give you a strong sense of your character within the dialogue, so I immediately knew that this was a guy who had done a lot of bad stuff. I had enough information to play my secrets, simply from the page in front of me. And in [this week’s episode], we find out what it took for him to become this version of Murn. 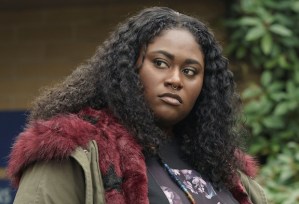 TVLINE | How worried should we be about Adebayo?
It depends on what your worry levels were at the end of Episode 5. I think it’s safe to keep those worry levels exactly where they are. [Laughs]

TVLINE | Now that we “know” one of the Butterflies, are we about to get a Butterfly 101 crash course?
Yes, you will. You will be learning more about where they came from, and while you won’t get all the answers about the why, there is definitely a bit more history about them and what the team is up against. We’ll go a long way toward understanding why Murn has been so driven, and we’ll get a stronger sense of what’s at stake.

TVLINE | Does this week offers up some juicy surprises?
I will say that from now until the end of the season is riddled with surprises. There’s a lot to resolve and by the end of this week there will be only two more episodes left, so we don’t hold back. There are a lot of surprises, secrets, twist and turns, plus all the hilarity and the literally explosive stuff, and you’ll have a lot of that which James Gunn always manages to infuse into his work. There’s a lot of heart at the core of [his writing], so we’ll see a lot of that. 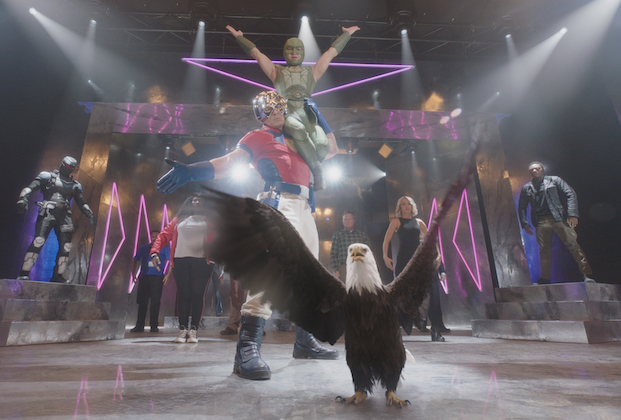 TVLINE | Hit me with your best anecdote from filming the opening credits dance sequence.
We had just done a take, and James came up to me and said, “Hey, do you want to see the take? Also, I want to have a word with you….”  I was like, “Oh, is this where you tell me you actually meant to hire Chiwetel Ejiofor?” And he says, “No, I would like you to be be in Guardians and the Galaxy 3.” That is for me the best moment of the day!

TVLINE | That was actually my next question, how you can be in a DC series and a Marvel movie. Are actors allowed to cross streams? [Editor’s Note: Yes, we do know this happens all the time.]
I guess you are! Either that, or somebody is waiting around the corner to lock me up. [Laughs] No, I feel very privileged to be one of the few people who can have both on their resume. It feels amazing, and it’s great to be doing it with James, so we have that continuity to our relationship…. It’s great to have it where we know each other well enough that he can push me and know what I’m capable of, or not. I remember being a regular audience member who went to Times Square in 2014 to see the original Guardians, and I haven’t been able to wrap my head around the fact that I’m now in it?!

TVLINE | Are you able to say what you’re playing in Guardians 3? Animal, vegetable, mineral…?
[Laughs] No. No. I’m not. But it’s a lot of fun!