Congratulations are in order: 1883‘s Miss Elsa Dutton has gotten herself hitched. And because this is one of the few shows in which that phrase might be taken literally, allow me to clarify: Elsa gets married in Sunday’s episode.

The groom? Handsome Sam, the Comanche man she met [checks notes] last episode. Somewhere, the ghost of Ennis says, “Wait, what?” Apparently, life comes at you fast on the Oregon Trail. Let’s recap what happens in “The Weep of Surrender.”

KINDRED SPIRITS | The hour begins with Sam and Elsa going on a traditional first date: bringing in a pack of wild horses. The teen literally rides her own pants off; when she looks down at her saddle afterward, she realizes that her slacks have a giant hole in the thigh. When one of Sam’s friends starts chuckling, Elsa asks him to translate: “He says you ride too good for white man pants,” Sam says. “He’s right.”

Elsa climbs into the family wagon to sew things up, and that’s where Margaret once more tells her to enjoy her freedom while she has it. “No matter where we go, you’re wearing dresses. And raising babies. And sweating over a garden and swallowing every dream you ever had, because that’s all the world wants from you,” Mama Dutton warns lovingly. But because Elsa is a Free Spirit, as the show likes to remind us, she doesn’t pay that much mind. And when some other Native Americans come to trade with the wagon party, Sam arranges for one of the artisans to make some chaps for Elsa — and he pays for them. 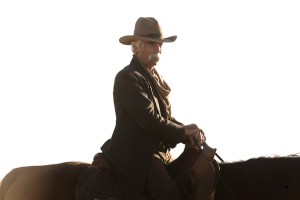 CHANGE OF PLANS | Meanwhile, Brennan announces that he’s decided it’ll take too long to get to Oregon, so he’s going to Denver, instead. There, the Germans can hang out until spring and then decide what they want to do. But the land isn’t free, and Denver was never on their itinerary, so they balk. James then steps up and says he’s heading to Oregon as planned, and that anyone who wants to come with him is welcome — and they’ll make it there before it gets too cold. However, “You come with me, I ain’t gonna baby you like he did,” James advises the Germans, who quickly agree that they want to follow James

Thomas approaches Brennan later and asks him to stay with the group as it heads toward Oregon. After all, Thomas is sticking with Noemi, whom he’d promised to see safely to her original destination. So Brennan makes nice-ish with James and asks him to lead the group, because they clearly trust him more than they do the captain. James agrees.

WIFE OF A WARRIOR | As they lay under a gorgeous expanse of blue sky, Elsa says that she thinks she’s going to stick around on the Plains rather than follow her family farther west. When Sam gently argues that mountains are, indeed, worth seeing, she replies, “It’s settled. You’ll take me, then.” He’s on board, but before they can talk about what gift he’s going to give James in exchange for his only daughter, Sam quickly falls to a crouch and gestures for her to do the same.

The reason? For once, it’s not that people are coming to shoot at them. There’s a herd of buffalo roaming nearby, and with Sam’s guidance, Elsa kills one. Sam cuts out its heart and instructs her to take a bite, adding, “Its strength is your strength.” And then like the willowy khaleesi that she is, our girl chows down. They ride back to camp, triumphant; Margaret is less excited to see her child with wild game blood smeared all over her face. 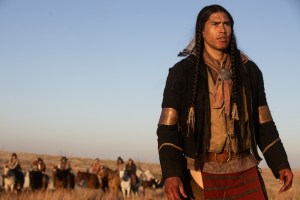 Later that night, Sam brings James his gift: a wild stallion from the horses they corralled earlier. But Margaret is apoplectic over the idea of her little girl getting married and leaving the family behind. When she says she won’t allow it, Elsa is unbothered: “You’re not allowing it. I’m 18 years old. I’m allowing it,” she responds.

Margaret later tries a different approach, saying that it’s a mother’s duty to pick her children up when they need help. “I love you, but I’m a woman,” Elsa says. “I pick myself up.” During this conversation, we also learn that Margaret and James were married when she was 17 and that Elsa was born when James was in an army prison for three years. At one point, Margaret seems to realize she’s lost the debate, and she asks Elsa to have a ceremony so that God can bless the union. Elsa says Sam saved her life twice and James’ life once: “God sent him.” 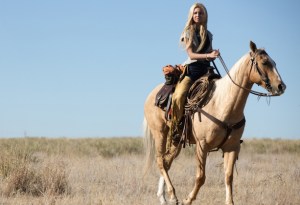 A MORE-THAN-FOND FAREWELL | James gets the wagons rolling early the next morning, though they stop by some water later in the day to rest and so Sam, an apparent horse whisperer, can break the stallion he gifted James. “What if she changes her mind about you?,” James wonders, but Sam quickly reassures him, “Then I will bring her back to you.” However, this is all very far off in the future, because Sam is sticking around on his land. So Elsa will accompany her family to Oregon, then turn around and come back to her husband in the spring.

That night, Sam gives Elsa naked Comanche lessons, which sounds like a euphemism but definitely is not. The next morning, she awakes to a beaded vest and necklace on the bedroll next to her. Lightning With the Yellow Hair puts on both, then mounts her horse and takes Sam’s hand.

They make plans to meet at that spot in June. As they kiss and part, she screams his name and then yells “I love you!” in Comanche. He cries back that this is her home, she has his heart, and that she is the wife of a warrior. Then he and the Comanche ride off, and Elsa, crying but sitting tall in her saddle, joins the on-the-move wagon train.