THE PERFORMANCE | Here’s an odd way to start off this week’s Performer of the Week column: Sunday’s Euphoria was incredibly difficult to watch, and that’s 100 percent because of Zendaya. (Stick with us here.) Because if you know, you know: The Emmy-winning actress’ raw take on Rue’s intervention (and beyond) was so viscerally real that it made us really uncomfortable.

The whole episode was a tour de force for Zendaya, but we’d like to focus on the episode’s cold open. She packed more depth of feeling into those 18 minutes than some actresses do in an entire feature film, as Rue tried every tack possible to get her mother to tell her where the confiscated drugs had gone. Zendaya steered Rue through her erratic and emotional hairpin turns at high velocity, careening the character toward disaster but always (barely) pulling her back from the brink. It was exhausting. It was gorgeous. It was a marvel that the 25-year-old Zendaya has the deep emotional well from which to pull such an affecting performance.

As the scene went on, she was indefatigable: sobbing in frustration and despair as Rue talked about how much she despised herself, lashing out with vitriol at her mother and sister, ultimately using her fists to break down a bedroom door. Every time we thought Rue had reached a breaking point, Zendaya pushed her past it and found a breathtaking, agonizing new low for the addict.

When Rue realized that Jules and Elliot had seen it all, and had in fact tipped her mother off about the drugs in the first place, Zendaya glowed with renewed fury. She marshaled all of Rue’s hatred — at herself, at her mom, at fate for taking her dad away so early — and honed it into a laser that sliced through Jules with sickening precision. Her voice lowered to a whisper, her eyes narrowed to slits, Zendaya broadcast Rue’s sense of betrayal with every inch of her body. It, along with everything else she achieved during the agonizing episode, was mesmerizing. 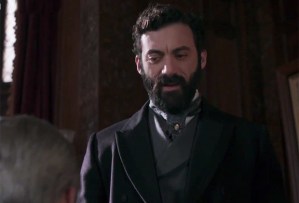 HONORABLE MENTION | We’ve all heard the timeless phrase that “when someone shows you who they are, believe them.” Well, The Gilded Age‘s resident railroad tycoon George Russell showed viewers exactly who he is this week, refusing to cave to a man’s desperate plea for capitalistic mercy — a callous move with unexpectedly tragic results. In turn, actor Morgan Spector reminded us exactly who he is as a performer, embodying the sorry-not-sorry, screw-your-feelings robber baron with chilling ease. While the effects of George’s decision are undoubtedly polarizing, there’s no room for debate about Spector’s forceful command of this endlessly complicated and fascinating character. 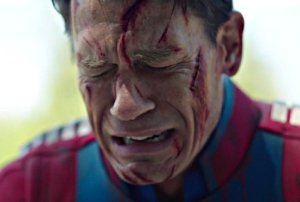 HONORABLE MENTION | When Peacemaker was announced to be the focus of his own HBO Max series, few looked forward to spending more time with the foul-mouthed killer of The Suicide Squad’s [Spoiler]. And yet here we are, enjoying every weekly installment — in large part due to John Cena‘s all-in, winning performance in the title role. Throughout the season, we’ve been nudged to feel bad for Chris Smith, or at least sympathize with  the son of a white supremacist. But in this week’s penultimate hour, Cena dove into his most powerful moments, as Chris — in the midst being whaled upon by the White Dragon, and in the wake of remembering the circumstances of his brother’s death — found himself with no option but to pummel his pop in return and, ultimately, kill him. Add in a sweet vigil at Eagly’s hospital bedside, followed by his joy at his sidekick’s revival, and what can we say? Cena rocks. 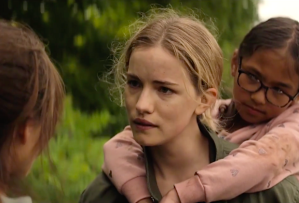 HONORABLE MENTION | Alan Ritchson most impressively made his mark as Reacher‘s title character, but our binge of Prime Video’s hit adaptation really left us thinking about Willa Fitzgerald‘s incredibly fine turn as Office Roscoe Conklin. As Reacher himself will tell you, Roscoe is not one to be intimidated — yet neither did Fitzgerald play the small-town LEO as some sort of invulnerable, scissor kick-throwing superhero. Instead, as best evidenced in Episode 6 (when Roscoe relieved Picard at the cabin), Fitzgerald proved her alter ego to boast keen senses, compassion, and the ability to hunt but not be hunted in a dark forest. She then can cap off such derring-do with on-the-spot empowerment, asking Charlie, who was so worried for her daughters: “Who’s tougher than the Hubble ladies…?” “Nobody.” “That’s damn right.” All told, Fitzgerald made Roscoe a hero we truly hope to see again.