The Gilded Age took a decidedly dark turn on Monday, ending its third episode with a bang.

After being severely underestimated by the city alderman, who spent much of the hour conspiring to destroy him, George Russell found himself in a most advantageous position. The alderman attempted to broker a new deal once their defeat was imminent, but it was too little too late. Not even Patrick Morris debasing himself by getting down on his knees and begging George for mercy could sway the shrewd businessman.

“We’ve already lost enough to make us poor,” Mr. Morris said. “But if it goes on for much longer, there are some among us facing ruin.”

Needless to say, he was hoping for a better response than this: “I won’t say I feel no pity, because I do,” Russell replied. “But you have not only tried to get the better of me, you and Mrs. Morris have snubbed and belittled my wife. How could I allow that to go unpunished? I don’t suggest that you men committed every crime that I’m avenging here, but to employ a modern phrase, I’m afraid you must face the music. My secretary will see you out.” 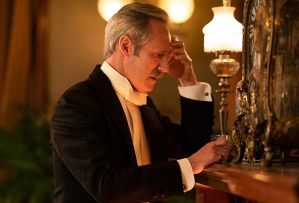 It was a cold, calculated move on George’s part, one that triggered (sorry) an act of tragic desperation. Following his meeting with George, Mr. Morris returned home, kissed his wife, then walked quietly upstairs to blow his brains out.

“I don’t know if it surprised me,” Morgan Spector tells TVLine of George’s behavior. “In the game he’s playing, he doesn’t really have room to be compassionate. Because Michael Gill was so brilliant in that scene, it was personally very difficult for me as an actor to not care and not respond. What he was doing was so heartbreaking. And it’s not as if George is unmoved by his pleas. On a human level, I think George would like to respond to Patrick Morris and relieve him of his pain, but he can’t. He’s in the middle of something where his family — his entire wealth — is at stake, not to mention this question of honor. The aldermen have all stood together to try to strip him of everything he’s ever built. It’s one of the things that happens in capitalism. There’s not always room for human decency.”

Looking ahead to next week, Bertha’s response to the news of Mr. Morris’ death is considerably less emotional than you might expect. But just as Spector defends George’s seemingly callous actions, Carrie Coon says there’s also a method to his wife’s madness.

“One of the positive ways of looking at it is that George married well,” Coon says. “He has a supportive partner, one who isn’t going to let him spin out. And they don’t keep secrets from one another. Their relationship has a foundation of honesty and respect. That’s the source of their strength. They stick together, even if they fail, and Bertha’s ready to fail with him and start over. That’s an incredible source of security when you know your partner is going to stay with you and trust that you’ll make the decisions you have to make.”

Your thoughts on The Gilded Age thus far? Drop ’em in a comment below.