“This whole story is completely true. Except for the parts that are made up,” Inventing Anna warns us at the very start of its premiere, alerting viewers that the show they’re about to see won’t let the truth get in the way of a good story.

And the real-life escapade on which Shonda Rhimes’ Netflix drama is based is a good story. As chronicled in Jessica Pressler’s 2018 New York magazine story “Maybe She Had So Much Money, She Just Lost Track of It,” a young woman who called herself Anna Delvey swindled lots of New Yorkers out of lots of money, then got caught. Julia Garner (Ozark) plays Anna in the TV series, which chronicles her rise, fall and subsequent jail time via the investigations of a journalist named Vivian, played by Anna Chlumsky (Veep).

In a moment, we’ll want to hear what you thought of the premiere. But first, a quick recap:

Anna, a young woman who speaks with an odd accent (German? Russian?), claims to be a German heiress. But when she’s brought up on grand larceny charges in 2017, the indictment claims she is actually Anna Sorokin, a Russian-born scam artist who bilked some of the city’s elite — not to mention banks and hotels — out of a whole lotta cash.

Vivian is very interested in Anna’s story and pursues it, even when her bosses at Manhattan magazine say not to. She attends the arraignment and tries to get Anna’s lawyer Todd (Arian Moayed, Succession) to give her access to his client; he’s not interested. So she writes Anna a letter at Riker’s Correctional Center, where the accused huckster is being held before her trial. Anna grants her permission to visit; before Anna agrees to be formally interviewed, they talk on background (aka nothing Anna says will be used in print). 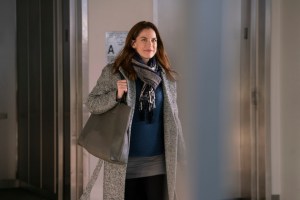 During the initial meeting, as well as others that follow it, Anna seems preoccupied with why Vivian didn’t request a formal press visit, which the inmate deems “VIP” and therefore better. She’s also concerned with Vivian’s style (“Why do you dress like that?… You look poor.”) and her very pregnant belly. (“Are you pregnant or are you just so very, very fat?” Anna wonders.) The gist: Anna maintains that she is an innocent entrepreneur who merely was trying to build her business — the Anna Delvey Foundation, an uber-exclusive Soho House-type club — but who ran into some interference along the way. At turns, Anna is defiant, standoffish and tearful, but she seems disinterested in Vivian’s sympathy or understanding.

Vivian’s bosses eventually give her two weeks to report the story, and that mainly happens because of some dark incident in her professional past that is referenced but not outright explained within the episode. “Google never forgets,” Vivian tells husband Jack (Anders Holm, Workaholics) at one point, adding that no other outlet will hire her if she leaves Manhattan. 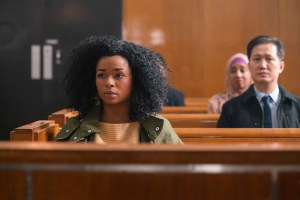 Vivian’s reporting takes her to the boutique hotel where Anna stayed in a $1,700/night room for a month and routinely tipped with $100 bills. An employee there mentions Anna’s social media accounts, which Vivian mines. She prints posts and hangs them up on the wall of her apartment, in the area slated for her child’s nursery. Later in the episode, Vivian realizes that the aforementioned employee also was one of Anna’s closest friends

A problem arises (for Vivian) when Todd lets her know that Anna is preparing to take a plea deal. Vivian’s co-workers at the magazine (played by Nurse Jackie‘s Anna Deveare Smith, Scandal‘s Jeff Perry and Billions‘ Terry Kinney) make it very clear to Vivian that this is bad for her story: If the case goes to trial, however, she’ll have more time to report.

So Vivian — pushed, perhaps, by a) an ultrasound that reveals her child is a girl and b) the knowledge that the time before her maternity leave is quickly dwindling — books a “VIP” press visit with Anna and plants the seeds that going to trial might not be the worst thing. “I want this story,” she says. “And in return, I can give you something you want: I will make you famous. Everyone will know the name Anna Delvey.”

It works. When Anna goes to court, she announces to Todd that she’s not going to take the deal: “I’m smart, and I’m a business woman. We do this, OK?”

Now it’s your turn. What did you think of the premiere? Grade it via the poll below, then hit the comments with your thoughts.