RuPaul’s kitty girls did not play nice on Friday’s Drag Race, and the show made certain to milk every last ounce of the drama. 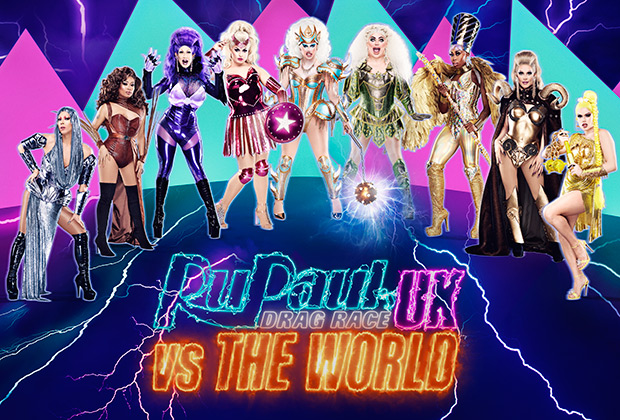 But it isn’t Daya Betty and DeJa Sky‘s minor scuffle that we’re here to discuss. [Extreme Trinity the Tuck voice] No ma’am. We’re breaking down that ugly display in Untucked between this week’s bottom two… before they even knew they were the bottom two.

Actually, let’s back up a bit first: This week’s unconventional design challenge required the 10 remaining queens to construct runway-ready ensembles using items that Michelle Visage ordered from Glamazon while on Glambien. (The commitment to theming on this show remains unparalleled.)

To their credit, some of the queens managed to convert Michelle’s drug-induced purchases into truly head-turning ensembles. Lady Camden got things off to a jolly good start by transforming into a cotton candy-colored fairy, complete with wings made from tent poles and netting; Willow Pill gave us “monster-under-the-bed drama” by channeling a child’s nightmare; and Angeria Paris VanMichaels elevated a little black dress into something fit for a Carrington.

But it was Jorgeous who really captured the judges’ hearts this week. “I’m feeling my f–ing Shakira oats right now,” she said as she stomped down the runway in a winning ensemble crafted from curtains, pillow cases and cookie cutters. Daya claimed that Jorgeous’ look wasn’t “top material,” but to be fair, it was probably hard for Daya to even see Jorgeous from all the way in the back with the other safe queens.

Two looks the judges weren’t crazy about, however, were Maddy Morphosis‘ “rag-tag homemade country” dress, which was so bad that the judges suspected her of using a prop to distract them from the outfit, and Jasmine Kennedie‘s “messy,” overcomplicated creation. (“Hat’s off to you!” Carson Kressley told her. “I mean, no, take it off.”) 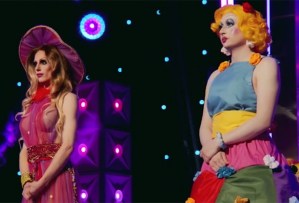 Naturally, Maddy was mortified about landing in the bottom again, but that wasn’t the only thing bugging her. “I am not going home to Jasmine,” she said, “especially not after what happened in the Untucked.” We then caught a glimpse of the two queens going at it like feral cats in the werkroom. Was it a little jarring seeing a “flashback” of something that hadn’t aired yet? Totally. But did it guarantee that more viewers would stay tuned for this week’s aftershow? You bet.

Here’s what went down on Untucked: After correctly predicting that she and Jasmine would be this week’s bottoms, Maddy declared, “I’ve already sent one bitch home, so now I just have to focus on sending Jasmine home. … I know my drag, I know what I present. I am not going home tonight.” Maddy attempted to clarify that she intended to slay the lip sync, not that she didn’t value Jasmine, but it was too late.

“I’m not worried about this lip sync,” Jasmine replied. “I do this on a daily basis in New York City. This is my bread and butter. So I’m not going in with the mindset of worrying about Maddy, or worrying about anyone else.” When Maddy threw a little “You should” at her, the clap back was swift. “I should? About what? All tea, girl.”

From that point on, the gloves were off. Maddy brought up how much the judges hated Jasmine’s look, Jasmine brought up Maddy’s spotty track record, Maddy called Jasmine out for talking too much, it was a mess. (And I wouldn’t be surprised if “Have your moment!” makes it into the intro of future Untucked seasons.)

Cut back to this week’s lip sync, now with all the necessary context: I was hoping for an all-out smackdown between these two, but Maddy simply didn’t bring it. There’s no question that Jasmine wiped the floor with her, employing every trick in the book to the tune of Beyoncé’s “Suga Mama.” So Maddy being told to sashay away came as no surprise. And with nothing but chocolate ‘neath her wrapper, Maddy’s time was up.

Your thoughts on this week’s Drag Race? Vote for your queen of choice below, then drop a comment with your full review.