Tommy Egan is a dead man — and that’s a big part of the fun at the start of Power‘s latest spinoff, Book IV: Force, which premiered Sunday on Starz.

Fans of the original Power know that Ghost’s former business partner/best friend left New York in that series’ finale. In a brief appearance in Book II: Ghost‘s finale, the character faked his death and set out for a new life — likely of crime — in California.

And at the start of Force‘s premiere, the unencumbered drug kingpin is, indeed, on his way to the Sunshine State. But when a brief side trip to Chicago turns into a much longer visit… welcome to your new city, Tommy!

In a moment, we’ll want to hear what you thought of the premiere. But first, let’s recap what took place in Episode 1.

PIT STOP | As Tommy’s driving to the West Coast, flashes of his life in New York flit through his mind. They torture him. He turns off his headlights and pushes the gas pedal to the floor, courting danger on the curvy road. When he nearly swerves off the road, he stops, screams and pulls himself together. Then he puts the car back on the road and takes the turnoff for Chicago.

As we infer from a photo Tommy’s carrying with him, he spent time in Illinois when he was a little boy. Through a funny interaction with a guy who tries to intimidate Egan with a knife — good luck, dude — Tommy learns that an old woman he thought was dead is now living at a retirement home. So he goes there, sees a woman with a vacant look getting wheeled around, and skedaddles quickly. 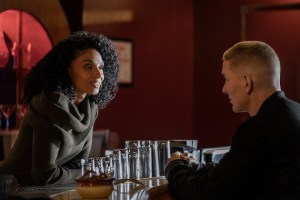 He makes his way to a bar called Dr. Parker’s Office, even though it’s only 11 am, and flirts with the female bartender, whose name is Gloria. “Some days, you just need a whiskey before noon,” he says, promising to come back later to try some of the excellent-smelling food she’s got simmering in the kitchen.

DIAMOND GETS OUT | Elsewhere, a prison barber named Diamond wraps up his sentence and is released. The guards love him so much, they chip in to buy him a set of haircutting tools so he can get started with his new career. Outside, his brother Jenard is very happy to see him — but neither of them are aware that another inmate is planning to go after Diamond after he gets comfortable with his return to life outside the prison’s walls.

TOMMY MAKES FRIENDS | Tommy is smoking outside Dr. Parker’s Office later that day when two guys give him trouble about moving his car. Words are exchanged. We learn that one of the hotheads is Victor Flynn, son of local crimelord Walter Flynn (played by Sons of Anarchy‘s Tommy Flanagan). And Victor used to date Gloria, though that seems to be on ice now — her choice, not his. After Victor leaves, his thug Simon stays behind, gets rough with a female patron and is generally an aggressively coked-up mess. Tommy sees all, and when Simon goes out to the alley, Tommy does what Tommy does to guys like him. Gloria comes outside, sees what’s happened and does not seem terribly shocked or upset. A few minutes later, she and Tommy are getting to know each other in the naked way in her bed upstairs.

“I haven’t had fun like that in a minute,” he tells her after, just before noticing some dogtags in her apartment. Her husband was deployed but “never came back,” she tells him; they weren’t married long before it happened. But that’s about as much pillow talk as we’re going to get, because Tommy has Simon’s phone and decides that he’s going to go to the meet that Simon was supposed to attend with Vic.

Once there, Tommy strong-arms Vic into introducing him to his connect. But Jenard — who’s from a rival drug ring — also is there for a meet with the connect. And the connect’s representatives are two strung-out young guys who demand money. Something’s clearly amiss, and when the shooting starts, Tommy kills the tweakers and manages the situation. But he’s got a fee, so he takes Vic’s money and a bag full of product.

I’m going to shorthand this whole situation now, cool? Jenard’s brother, Diamond, was the head of a gang called the CBI. And they routinely go up against the Flynn family’s organization, which also includes Vic’s sister, Claudia. Claudia, by the way, really wants a bigger role in the family business… but her dad doesn’t think that’s a great idea. His hesitance doesn’t stop her from trying a designer drug at a club, having hella high sex with the woman who gave it to her, then asking where she can get some more. Hmm, I smell a new business plan afoot…

BROTHER FROM THE SAME MOTHER | The next day, Tommy revisits the retirement home and finds the old woman in the greenhouse. He calls her “Nana” and tells her he hasn’t seen her since he was 4, because “my mother told me you was dead.” She doesn’t react to him until he shows her the photo. “Tommy!” she says, smiling, but then kinda checks out again. As Tommy leaves, a man follows him and asks why he was visiting the woman, whose name is Miriam. They ascertain that they’re both her grandsons, and Kate is their mom.

Tommy and his newly revealed half-brother, whose name is JP, figure out what’s what. He was raised by his father, who told him that his mother was dead. “You got out ahead on this deal, trust me,” Tommy tells him about Kate. JP gives Tommy his number before Tommy leaves; though Tommy later throws it away at a gas station, he immediately fishes it out of the wastebasket, cursing himself as he does so. 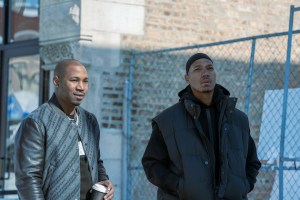 ‘I’M DONE KILLING PEOPLE’ | Elsewhere, Jenard proudly brings Diamond to the barber shop where their dad used to cut hair and announces that he bought the place so Diamond can have a business that’s on the up-and-up. Diamond says that’s good, especially because after his 15-year sentence, “I’m done killing people.”

Later, though, a police officer walks into the shop, acts menacing but covers it with a smile, and makes sure that Diamond sees his badge before he leaves. This can’t be good. 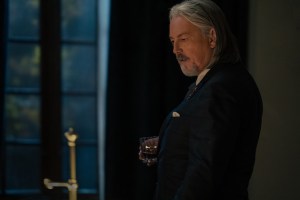 U-TURN | Tommy is back on the road to California when he’s suddenly surrounded by a bunch of SUVs: Flynn’s people. They stop him cold and make him drive to Flynn’s estate, where the patriarch introduces himself and Claudia watches from the terrace. “There hasn’t been this much heat since Mrs. O’Leary’s cow kicked over that lantern,” Flynn quips. “Mrs. who?” Tommy asks, annoyed. There’s a lot of macho posturing, but eventually Tommy tosses the bag of stolen drugs at him, and Flynn orders him to leave the city.

You just know that doesn’t sit well with Egan. So when he gets a call from his California hook-up, he informs the guy that he’s staying put and not working for anyone. Then Tommy swings his car around and drives back into Chicago.