Andrea Bordeaux, who starred as Ella in Season 1 of the Starz comedy Run the World, is speaking out following her departure over the show’s COVID-19 protocols.

Bordeaux reportedly failed to comply with Run the World production company Lionsgate Television’s vaccine mandate, which requires that cast and crew members who work in Zone A be fully vaccinated.

Addressing her exit from the series ahead of Season 2 on Instagram, the actress denied reports that she chose to leave, saying that “Lionsgate made no efforts to find a workable solution. I was fired.”

“My heart is with all of the people around the world who feel that they are losing so much due to their choice to stand in their convictions and to honor their deepest core beliefs,” she added. 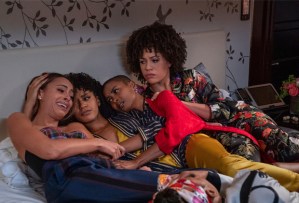 The actress also reflected on her time with the Starz series: “Getting the opportunity to play Ella on Run the World was an absolute dream come true. I would have loved to continue to grow with this delightful character and having to come to terms with this sharp turn in my life, my dream, and career these past several weeks has been heartbreaking beyond words. I have so much love for the cast and crew of Run the World and will miss them. I wish you all the best.” she said.

Run the World centers on a group of thirtysomething Black women — played by Bordeaux, Amber Stevens West, Bresha Webb and Corbin Reid — who juggle friendship, love and busy careers while living in Harlem.

Bordeaux portrayed Ella, a journalist-turned-novelist who struggled throughout Season 1 to bounce back from her ill-received second book. The finale saw her sneaking away from her friends to start writing the first chapter of her new book.

The role of Ella is not expected to be recast, and it’s unclear how the show plans to write her out of Season 2.