Faces both familiar and live-action new populated The Book of Boba Fett‘s last episode before the season finale. Who were you most thrilled to see?

Yeah, so… allllll of that happened, as the series technically called The Book of Boba Fett closed in on its season finale. 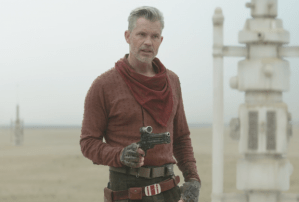 First up, we got a short sequence in which Freetown Marshal Cobb Vanth confronted some Pykes who were running spice too close to his neck of the woods. Vanth says that while such doings may fly in Mos Espa and Mos Eisley, he is one to lay down the law. One silly, silly Pyke reaches for a blaster, only to get gunned down by Vanth, who is (of course) a much quicker draw. Vanth orders the other one to get on his way and leave the chest of spice behind. After the Pyke leaves, Vanth kicks the chest over and lets the spice scatter to the wind, even though as he was told it is worth more than his entire town.

Next up… TVLine asked you last week if The Book of Boba Fett would indeed follow the Mandalorian as he pays a visit to his “little friend,” to deliver the armor that he had the Armorer forge from the spear tip. The answer was yes — and then some. When Mando arrives at his destination, a forest planet, he finds large, ant-like droids assembling with stones what would be a school where Luke trains Jedi. R2-D2 welcomes Mando with friendly chirps, but moments later powers down while the ant droids quickly fashion a bench on which their guest should wait. Because it will apparently be a while.

We see Luke and Grogu sitting across from each other under a tree, meditating/feeling the Force flow through them and all that jazz. Grogu spies a frog and uses the Force to lift it up and over to his hungry-hungry mouth… but Luke stops/lightly scolds him. (Luke then uses his own power to levitate all the frogs, to Grogu’s delight.) Luke takes Grogu for a walk, using the Force to “whoosh” his padawan along every few tiny steps, and shares how he is reminded of someone important from his life — Master Yoda. Luke even makes note of Yoda’s backwards style of speaking, and propensity for riddles. Luke asks Grogu if he remembers his time “back home,” then offers to help jar the wee one’s memories with the Force. As he does so, Grogu remembers witnessing three lightsaber-wielding Jedi fruitlessly fight a platoon of clone troopers, during what was clearly a perilous night. After, Luke notes that the galaxy is a dangerous place, and he will help Grogu train to protect himself. 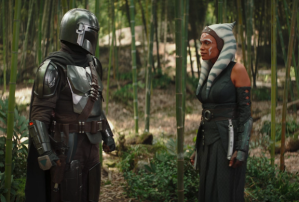 Meanwhile back at the bench, Mando is jarred from his rest by the arrival of Ahsoka Tano. She makes clear that she isn’t there to help train Grogu (Luke will, by choice), and avows that Grogu has been “doing fine” here, in the safest place in the galaxy. Asked about the purpose of his visit, Mando says that he wants to make sure Grogu is OK, to which Ahsoka asks, “Are you doing this for Grogu, or for yourself?” Mando says that he comes bearing armor for the “Mandalorian foundling,” but as they gaze upon Luke training Grogu in the distance, Ahsoka suggests that Grogu is no one’s foundling no more, but now a padawan. Ahsoka makes clear that if Grogu sees Mando, it will only make things more difficult for him — so she offers to deliver the armor herself, and Mando agrees. After Mando flies off, Ahsoka meets up with Luke at the conclusion of a rigorous training session, and he wonders aloud if Grogu’s heart is in it…. 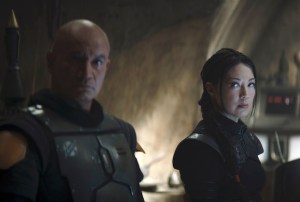 Traveling to Mos Espa and arriving at what was once Jabba’s palace, Mando finds Fennec Shand (and theoretically Boba, though he says not a word) debriefing their sparse army (including Krrsantan, the Mods… and the weasley majordomo, I guess?) on how the three families have agreed to lay low while the Pyke threat grows. Fennec says that if an all-out war breaks out, they will be woefully outnumbered, so Mando offers to enlist more guns…. 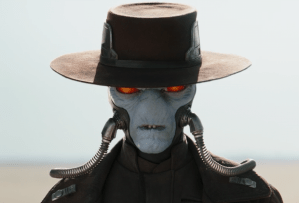 Mando travels to Mos Pelgo (now known as Freetown), to hit Cobb Vanth up for a favor. Vanth reminds Mando that they are already square, but sees his point that while Freetown is fine for now, they could easily be next on the Pykes’ hit list. Vanth offers to see what he can do, despite the grumblings of his Weequay barkeep. After Mando flies off, a figure in a brimmed hat appears on the horizon, striding toward town. Vanth has everyone ushered indoors and shoos his deputy away as he awaits this stranger, whose full, blue/green face we at first don’t quite see. The stranger eventually identifies himself as Cad Bane — a famed bounty hunter from the Clone Wars and The Bad Batch animated series, by lore Fett’s mentor, and again voiced by Corey Burton — while “asking” Vanth to stand down and stay out of Fett’s fight; in trade, he will be paid whatever Fett was offering. The standoff on Main Street grows tense, especially when Vanth’s deputy creeps back outside with an itchy trigger finger. The deputy goes for his gun, and Vanth in turn raises his to protect him — but Cad Bane puts a blast into Vanth, before riddling the deputy with several. Bane reiterates his warning before sauntering back into the distance, while locals rush out and tend to Vanth.

In the following scene, a pair of Pykes stop by Garsa Fwip’s Sanctuary, but do not stay for drinks; instead, they quickly exit, leaving behind a camtono. A server droid points out their oversight, yet it wasn’t one — and a moment later, we see from outside the cantina get blown to smithereens, Garsa Fwip and all. 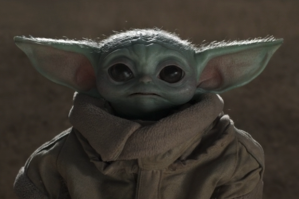 Closing out the eventful episode, we return to inside the Jedi temple, where Luke unwraps and shows to Grogu the Beskar chainmail that arrived for him. Luke also takes from a box the fun-sized lightsaber once wielded by Master Yoda. Grogu must choose one, Luke says — the saber, and train to be a mighty Jedi, or the armor, with the intent to return to the Mandalorian’s side. Grogu looks back and forth at the two offers, before looking Luke in the eye  and parting his lips to say…

Well, we don’t know. “Tune in for The Mandalorian Season 3,” perhaps?

What did you think of the episode “From the Desert Came a Stranger”?